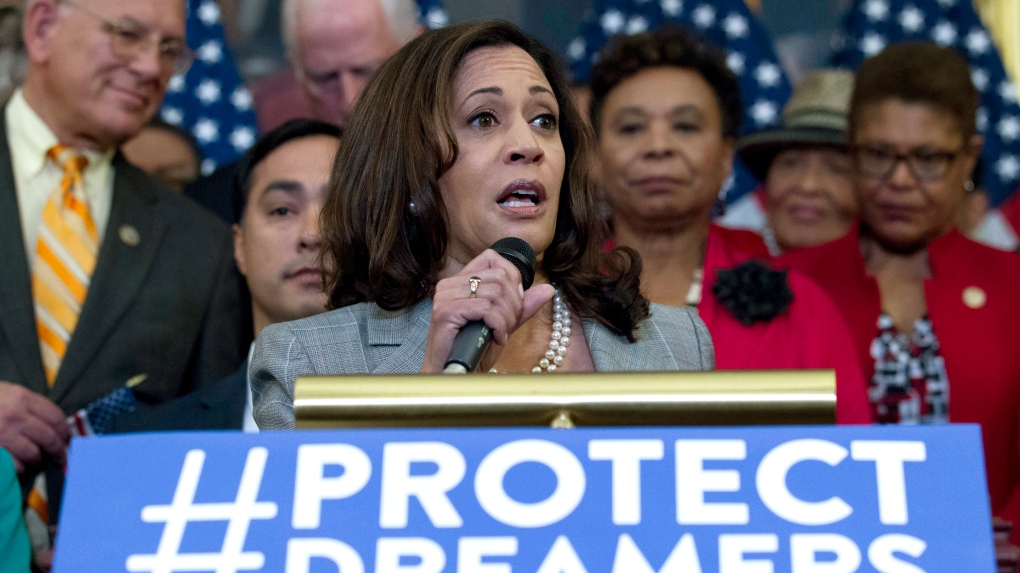 MONTREAL -- An alumna from a high school in a Montreal suburb is increasingly being mentioned as a potential candidate to prevent U.S. President Donald Trump from winning a second term in 2020.

While California Sen. Kamala Harris does not publicly embrace speculation about her 2020 intentions, some online betting websites have put her at the front of the pack to lead the Democratic party into the next election.

Mother Jones, a left-leaning current affairs magazine, has described her as one of the Democrats who could beat Trump in the 2020 election, and the Washington Post ran a 2015 profile with the headline: "Is Kamala Harris the next Barack Obama?"

Harris's political success is no surprise to those who knew her during her teen years in Montreal, where she attended high school in Westmount, just west of downtown.

In a 1981 yearbook from Westmount High School, the then-16 year old Harris described her favourite pastime as "dancing with Midnight Magic," a dance troupe she founded with her friend Wanda Kagan.

"We performed in community centres in front of elderly people or danced at fundraisers," Kagan told The Canadian Press. "Outside of our studies, dance took up a lot of our time."

After graduation, Harris moved to the United States and the childhood friends lost touch, Kagan said.

But in 2009, Kagan turned on "The Oprah Winfrey Show" and saw her old friend, who was then a San Francisco district attorney and had just published a book, being interviewed.

While she said it was a shock to see her friend on TV, Kagan said she's not surprised Harris went on to achieve success.

"In reality, I'm not surprised by what she's accomplished because she's a fighter," Kagan said. "She's strong, independent and has always fought for the rights of others."

At the age of 13, Harris organized a protest in front of the building where she lived in Montreal because the owner didn't want children playing on the lawn, her sister Maya told San Francisco Gate in 2012.

Harris convinced other children to join her in protesting and they convinced the building's owner to change the rule, according to the news site.

That story doesn't surprise Trevor Williams, who knew both the Harris sisters when they lived in Montreal and describes them as popular and studious.

"They always had the best grades in the class and everything seemed so easy for them," he told The Canadian Press.

"But in reality, they succeeded because they worked hard, their mother was very strict. Often, when the rest of us went to the movies, the sisters had to stay home to study."

Some 40 years later, it's in Congress that Harris is fighting her battles.

She was elected to the Senate in 2016 and sits on the intelligence committee tasked with shedding light on Russian interference in the last election campaign, where she made headlines this summer for her intense questioning of Attorney General Jeff Sessions.

Harris, the daughter of immigrants from Jamaica and India, was born in Oakland, Calif., in 1964.

She moved to Montreal in the mid-1970s after her parents separated and her mother took a job teaching at McGill University and researching at the Jewish General Hospital.

After returning to the United States after high school, Harris was elected district attorney of San Francisco in 2003 and as attorney general of California in 2011.

Christophe Cloutier-Roy, a researcher who studies U.S. politics at the Universite du Quebec a Montreal, says there have been hints Harris is planning a 2020 bid.

"Since entering the Senate, she's positioned herself against Donald Trump, she's voted against most of his bills and his nominations," he said. "She's also participating in several fundraising campaigns and raises a lot of money."

Thus far, Harris has refused to speculate on her intentions for 2020.

When questioned on the matter by MSNBC host Lawrence O'Donnell, she responded "Lawrence, I don't even know what I'm having for dinner."

But whether she runs or not, she remains a great source of pride for the Montreal-area high school that watched her grow up.

"To feel that being in these hallways, you can go from these hallways to one of the top, most influential positions is very exciting and something to work towards," guidance counsellor Karen Allen said.

"To have to have that kind of role model (for the students) is beyond all expectations."