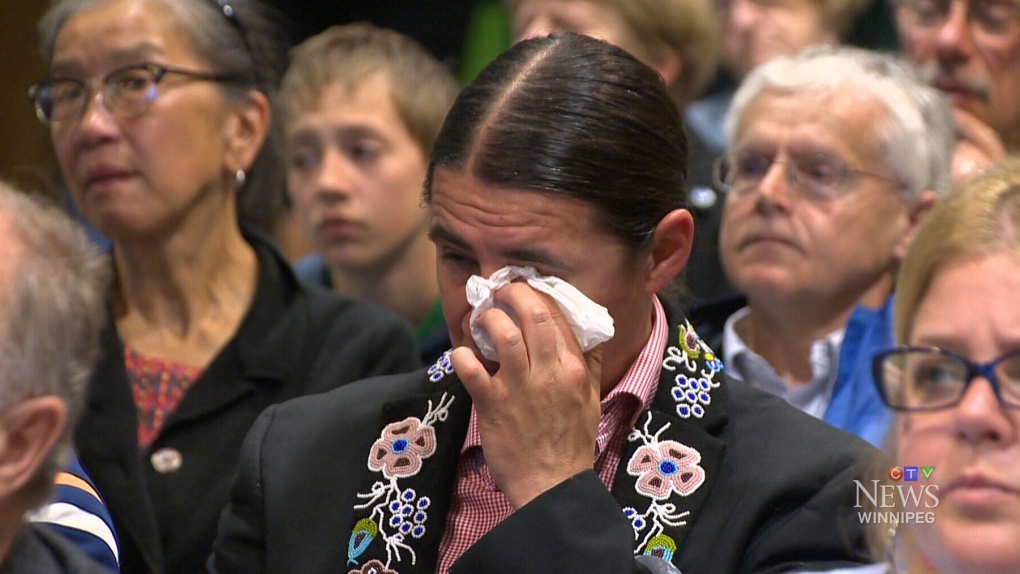 Tears are shed in Winnipeg as the findings of the Truth and Reconciliation Commission are released.

The Truth and Reconciliation Commission released an executive summary of its findings Tuesday.

The commission concluded that the policy of sending Aboriginal children to residential schools amounted to “cultural genocide.”

As Canadians came to terms with the news, survivors across the country shared their stories.

Maloney attended the residential school at Shubenacadie, N.S., which was run by the Roman Catholic Church.

Maloney recalled being in her bed at night feeling lonely and afraid. Her sisters were also at the school but not allowed to comfort her.

She was not allowed to speak Mi'kmaq and punishments included hitting with straps and shaving off hair.

“They were trying to assimilate us,” she said. They just wanted to get rid of the Indians.“

Roulette attended the residential school in Portage la Prairie, Man., which was operated by the United Church of Canada.

Students were disciplined for speaking Cree or crying because they missed their parents.

“I remember getting strapped,” she said. “They asked me how many times I wanted to be strapped.”

She said she asked for just five, knowing it was all the pain she could stand.

“Everything was new,” she recalled. “Every step seems to be a challenge to understand.”

When she first walked in the school, an administrator ripped off her scarf.

“I remember as if he stripped some part of my life and I found myself with low esteem,” she said.

Beardy left at age six for a United Church residential school in Norway House, Man., where she witnessed violence over her decade there.

“We cried to each other,” she said. “Imagine yourself being six years of age and trying to console another person.”

“A lot of times I think,” she added, “how many times did my mother’s heart break when we were being pulled away from her?”

Bellegarde was six years old in 1947 when he was forced to attend Qu-Appelle Residential School in Lebret, Sask.

He said the sun dance, the rain dance, sweat lodges and his language were all taken from him.

Now he hopes for increased investments in First Nations education, hunting and health.

"You know we've been band-aided so much over the years, ‘Let’s give them a little bit just to shut them up,’” he said.

“We have to do a little bit more than that,” he added. “I think the onus is on us elders."

Lightning attended a residential school from age seven to age 16.

She experienced a loss of dignity, she said. “We were called numbers.”

She recalled being crammed in a dorm and missing her family.

“You don’t have the parenting,” she added, “the nurturing as a child.”

Lowhorn said she was locked in a tiny room one day, simply because she couldn’t find her shoes.

She was also beaten by a teacher with a scrub brush.

“He made me bend over the tub, pulled my pants and beat me with it,” she said.

“I don't like someone to yell at me because it reminds me I was always yelled at.”