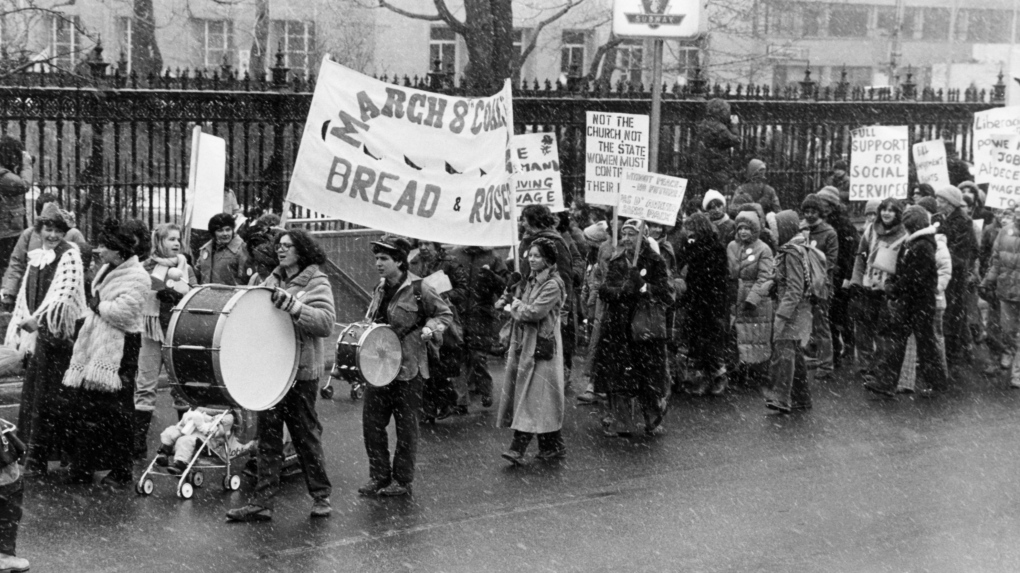 About 1,500 people are seen marching through the heavy snowfall in support of International Women's Day in Toronto, Ont., March 8, 1980. Canadian security agents were so busy looking for Communist infiltrators in the flowering women's liberation movement, they all but missed a genuine social revolution that transformed millions of lives, says a newly published book. (THE CANADIAN PRESS/Jann Van Horne)

OTTAWA -- Canadian security agents were so busy looking for Communist infiltrators in the flowering women's liberation movement, they all but missed a genuine social revolution that transformed millions of lives, says a newly published book.

"Just Watch Us" delves into the dusty Cold War records of the RCMP security service to chronicle how Mountie spies and their informants monitored the meetings, rallies and speeches of women fighting for gender equality, fair pay and access to abortion.

The book emerges from years of research by Christabelle Sethna, a professor of feminist and gender studies at the University of Ottawa, and Steve Hewitt, a senior lecturer in the history department of the University of Birmingham.

The RCMP security branch kept a watchful eye on a vast array of people and groups in virtually every corner of society, amassing hundreds of thousands of secret files that reflect an overwhelming concern with the Red Menace of Communist subversion.

As a result, the Mounties saw the youth-fuelled causes of the New Left, including the women's movement, through a "red-tinged prism," the book argues.

It wasn't a vendetta against women or feminism that prompted the RCMP security service to fixate on the phenomenon, but "real and imagined connections" of the blue-jeaned rabble-rousers to the extreme left, especially Trotskyists who gravitated between the New and Old Left in support of various causes.

Sethna and Hewitt combed through thousands of pages of declassified intelligence files -- many still heavily censored -- to trace the RCMP interest in women's causes.

The Mounties churned out reams of memos and duly squirreled away the pamphlets, position papers, notices and meeting minutes they quietly collected at events across the country.

The RCMP diligently followed the 1970 Abortion Caravan, a trek from Vancouver to Ottawa that used guerrilla theatre to highlight the issue of uneven access to legal abortion services.

An RCMP investigator's summary of the caravan's April 30 reception in Saskatoon dismissively noted: "General reaction was that of distaste for the slovenly attire of the members, and their accompanying antics whllst parading downtown."

In Ottawa, the trekkers outfoxed the spies. Several women in prim skirts, carrying purses, made their way into the gallery of the House of Commons. They then pulled chains from their handbags, locked themselves to seats and loudly denounced the abortion law.

"One intrepid participant managed to commandeer the bilingual simultaneous translation system to boom her speech out to the entire House," the book says. "Another threw a water bomb that landed near the prime minister's empty chair."

Often, however, informants seeking hard evidence of left-wing revolutionary activity "found themselves instead sitting through heady, interminable discussions about the patriarchal nuclear family."

Much like the FBI in the United States, which also monitored women's groups, the RCMP seemed oblivious to the power of a potent social force that continues to reverberate today.

The archival files are dotted with the names of activists who would rise to national prominence, including future senators Therese Casgrain and Anne Cools.

The authors' research made headlines a decade ago when a biographical sketch of Rita MacNeil -- the much-admired Maritime songstress -- turned up in an RCMP file compiled long before she found fame. MacNeil, active in the early 1970s with the Toronto women's caucus, was dumbfounded to learn of the surveillance.

"When I look back, I can't recall anything that would have been a threat to anyone," she told The Canadian Press in 2008. "To think that we were being watched -- it's a surprise."

Sethna and Hewitt were torn between transparency and privacy, and compromised by agreeing, on a case-by-case basis, to omit the names of some surveillance targets, especially if they may still be alive.

Since they needed to blend in, many informants were female, and the intelligence files document the extent to which women acted as agents of the state in reporting on the activities of their sisters.

"Should that have any impact on the politics of women's liberation?" Sethna wonders, adding that she hopes the realization that some women were moles does not lead to rancour over suspicions of betrayal.

By the mid-1970s, the women's movement began to transform the RCMP itself, as female members donned the red serge.

The RCMP's first permanent female commissioner, the recently appointed Brenda Lucki, takes over a force still dealing with the fallout from decades of harassment faced by women Mounties in a male-dominated culture.

The excesses of the RCMP security branch led to its dissolution and the birth in 1984 of the civilian Canadian Security Intelligence Service. The move was intended to put an end to Mountie escapades like burning a barn to prevent a meeting of radicals.

The authors see current parallels, however, given the expansion of CSIS powers in recent years that allow the spy service, like its RCMP forerunner, to disrupt security threats through sabotage.

"I worry that, in some ways, we've forgotten some of the lessons of the 1970s," says Hewitt, who has written extensively about security and intelligence issues.

"I think for government agencies the past is what happened yesterday. There's no sense of reflecting on a longer history."