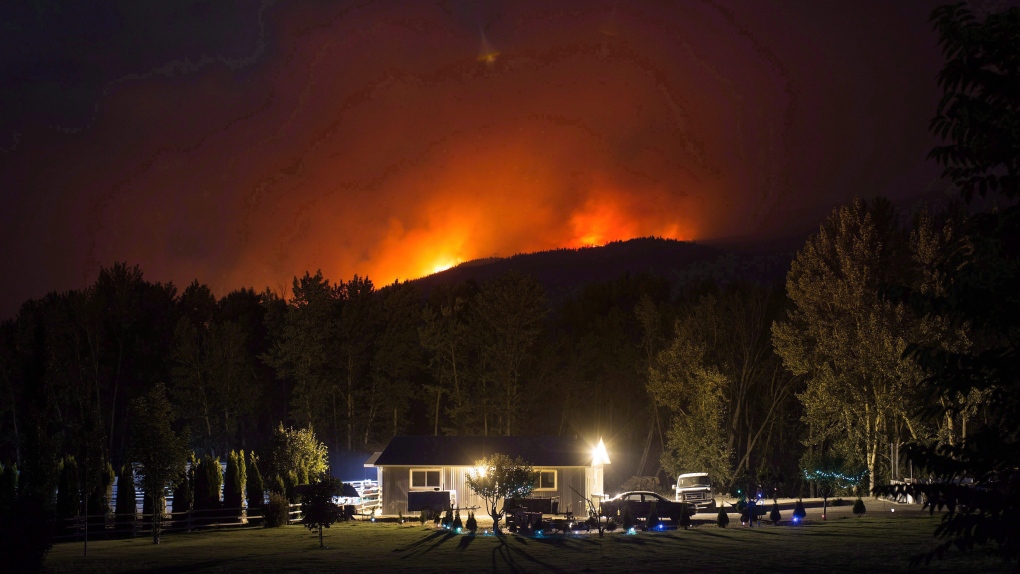 A wildfire burns on a mountain behind a home in Cache Creek, B.C., in the early morning hours of Saturday, July 8, 2017. (THE CANADIAN PRESS/Darryl Dyck)

VANCOUVER -- A campfire ban is slated to take effect this week in the same area of B.C.'s southern Interior where the province's largest-ever wildfire burned last summer.

The ban is in addition to similar restrictions imposed this month covering woodlands across the southern third of the province.

Starting Tuesday at noon, campfires will not be permitted in the Cariboo Fire Centre, which includes Quesnel and Williams Lake, cities that saw mass evacuations last year as fires charred more than 5,400 square kilometres of bush.

The fire danger rating issued by the BC Wildfire Service shows most of the province ranked at high to extreme, with only a portion of northeastern B.C. ranked as moderate to low.

Evacuation alerts have been issued in two areas as a blaze threatens properties 25 kilometres northwest of Fraser Lake and at a lodge at Cathedral Lake in the path of a 10-square-kilometre wildfire south of Princeton.

A Ministry of Forests news release says a hydrological drought rating is in effect along the entire length of the B.C. coast, and residents, municipal, agricultural and industrial businesses are urged to scale back water consumption.

The Province says it has identified a number of important fish bearing streams on Vancouver Island that are approaching critical environmental levels needed for ecosystems and fish.