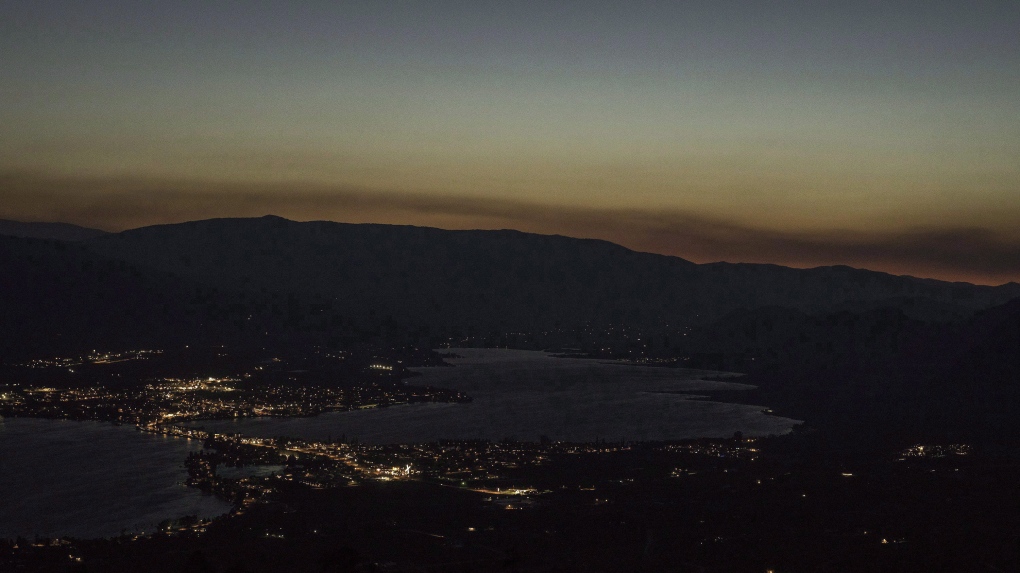 Looking high above the small town of Osoyoos, B.C. in the southern Okanagan, the glow of smoke and fire illuminates the night sky on Thursday July 19, 2018. (THE CANADIAN PRESS/Jeff Bassett)

VANCOUVER -- Smoke from wildfires within British Columbia and from thousands of kilometres away is combining with a heat wave to create a hazy pall over much of the province.

Environment Canada has issued air quality advisories for every region of B.C., except Haida Gwaii, the northern and western edges of Vancouver Island and a small corner bordering Yukon and Alaska.

The weather office says most of the advisories relate to high concentrations of wood smoke, and conditions could be revised on short notice, but those with heart or lung conditions, the elderly, infants and children are advised to limit exposure to the smoky air.

A continuing heat wave is also blamed for reducing air quality across parts of the south coast, as the same system that has brought record-breaking temperatures also traps smog over the Fraser Valley and eastern sections of the Lower Mainland.

An air quality advisory issued by Metro Vancouver says the smog is in addition to a layer of wildfire smoke from a bog fire in Richmond, and blazes in the Interior, Alaska and as far away as Greece.

Conditions, especially for regions of B.C. covered by ongoing heat warnings, are not expected to ease until at least Tuesday, with clouds and possible showers in the forecast by later in the week.