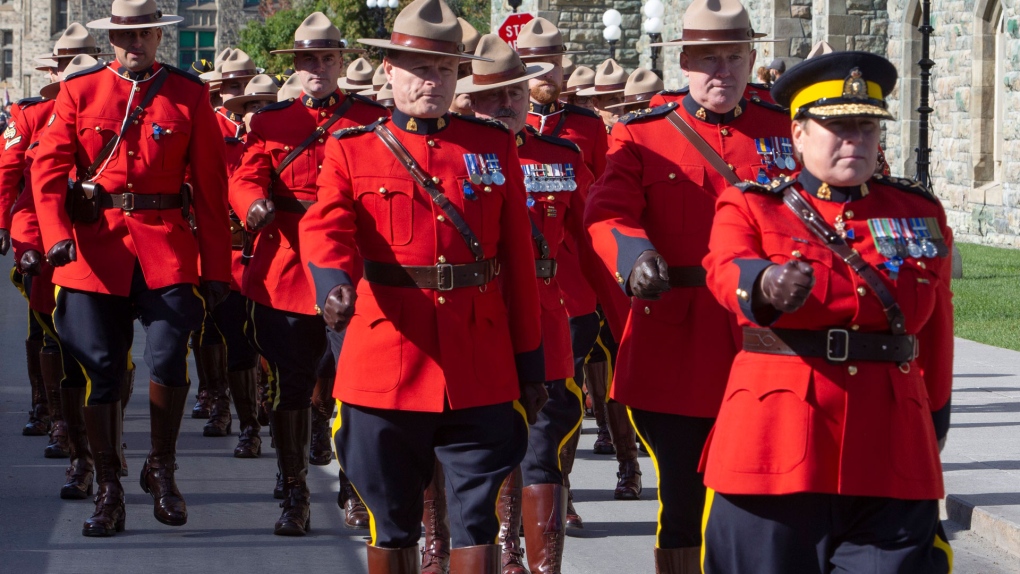 RCMP Commissioner Brenda Lucki leads members of the RCMP in march in honour of fallen Canadian Correctional Services officer Lesa Zoerb, who was killed while on duty, as they take in the Canadian Poilce and Peace Officers 42nd Annual Memorial Service, on Parliament Hill in Ottawa on Sunday, Sept. 29, 2019. THE CANADIAN PRESS/Fred Chartrand

VANCOUVER -- One of the first Indigenous women to join the RCMP in Manitoba is the lead plaintiff in a proposed class-action lawsuit that alleges systemic racism within the force.

A statement of claim filed last week in Federal Court alleges that Margorie Hudson and other employees were subjected to racism by colleagues and management.

It says Hudson joined the force in 1979 as a so-called special native constable and then as a regular constable but left in 2009 when she could no longer endure the discrimination, disregard for her complaints and the stress and other consequences for her physical and mental health.

The RCMP classified Hudson's departure as a retirement and denied her an exit interview, the lawsuit says.

The allegations have not been proven in court and a spokeswoman for the RCMP said it would be inappropriate to comment as the matter is before the court.

Catherine Fortin said in an email statement on Monday there is no room for racism or any other kind of discrimination in the RCMP and the police force is committed to ensuring that its policies and practices are fully inclusive.

The statement of claim filed against the federal government alleges the RCMP breached Hudson's right to serve Canada in an environment free of discrimination.

It says the RCMP and its management allowed a workplace environment that normalized racism.

Hudson often saw racialized members being treated differently and she received unequal pay and training and lost opportunities to work on high-profile cases compared with non-racialized colleagues, the lawsuit says.

The lawsuit says Hudson had a high success rate in solving difficult cases, but when she asked to be considered for promotion "the plaintiff was told that she should be happy the RCMP had recruited her in the first place."

It also alleges Hudson was sent to do "countless dangerous jobs by herself with no back up, in situations where non-racialized RCMP members were not sent alone."

Hudson raised her concerns with superiors many times, it says.

"On one occasion, the plaintiff was strongly encouraged to drop a complaint or otherwise face a transfer. She was, in fact, transferred for speaking out," it says.

Public scrutiny and recent admissions by RCMP Commissioner Brenda Lucki that systemic racism exists within the force made it safer for Hudson to take action now, the statement says.

"It's very similar to what happened with the Me Too movement," said lawyer David Klein, who represents Hudson.

"As people see that they're not alone, they feel less isolated, and there's a safer environment in which to bring forward their experiences," he said in an interview Monday.

Klein Lawyers has also represented women in a class-action lawsuit over harassment based on gender and sexual orientation within the RCMP, which was certified in January 2017.

The firm has since been contacted by dozens of current and former members of the RCMP who shared experiences of racism and religious discrimination within the police force, said Klein.

If certified by the court, the lawsuit seeks to award members of the class with financial damages, noting Hudson and others sustained injuries and consequences including post-traumatic stress disorder, diminished self-worth, anxiety and depression.

But Klein said it's about more than money.

"They want initiatives put in place to ensure that minority groups who are represented in the force currently and who join the force in the future don't have to endure what they endured."

Klein said he hopes the certification hearing for the lawsuit will happen before the end of the year.