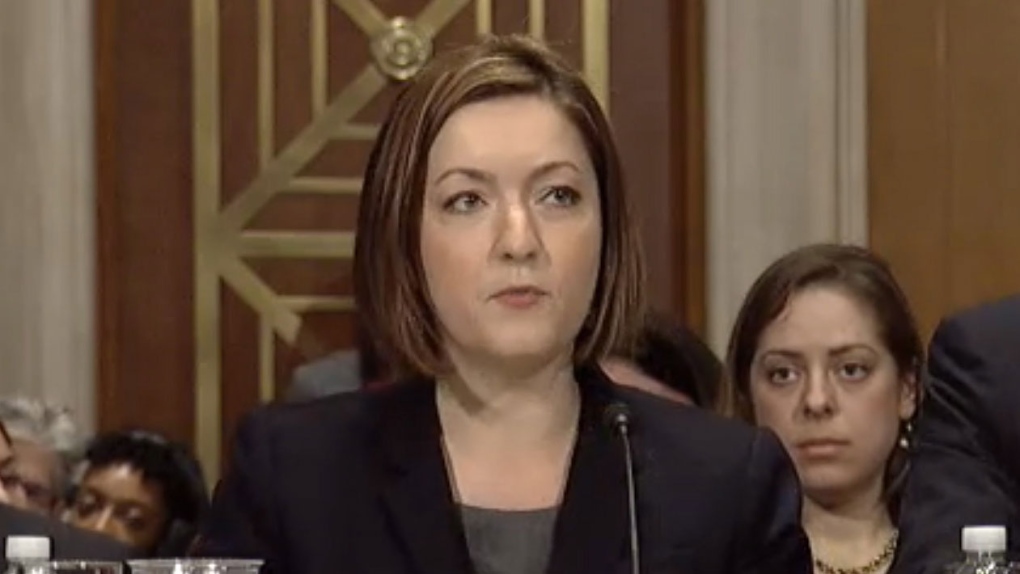 Dr. Danielle Martin testifies before a U.S. Senate Subcommittee on Primary Health and Aging Tuesday, March 11 2014, in an image taken from video. (Senate.gov)

WASHINGTON -- Political offers have been pouring in for a doctor who enthusiastically defended the reputation of Canada's medicare system during some tense exchanges in the U.S. Congress.

Dr. Danielle Martin said she's been courted by political parties at the municipal, provincial and federal level since her appearance last month enjoyed a moment of viral celebrity.

But it's clearly not something the Toronto physician, health-policy professor and vice-president of the Women's College Hospital wants to discuss.

All Martin will say is that she has no interest in the offers, which came from different parties at all three levels of government to run in elections over the next year-and-a-half.

"Certainly there have been some people who have reached out to me on that score," she said in an interview.

"It helps that there seem to be elections pending at every level of major political office where I live. But I'm not doing that. I've got a big job already ... I'm happy to offer my advice on health policy to anyone who's willing to listen."

Martin said she didn't expect anyone other than her mom to watch her appearance last month before a U.S. Senate sub-committee.

The audience wound up being considerably larger. It included U.S. cable talk TV and American and Canadian news sites that ran clips from her snappy back-and-forth with Republican lawmakers.

Martin was invited to testify by the committee chairman, Independent Vermont Sen. Bernie Sanders, a self-described socialist who would like to see the U.S. adopt a single-payer system like in Canada, something Vermont is already doing.

Canada's health system is really run by the provinces, with federal funding, Martin explained, citing research showing better outcomes for cancer and heart patients in Canada at a much lower cost than the U.S. medical system.

That made her a target for Republicans on the committee, but Martin counter-punched with gleeful spontaneity.

Was it true that Canadians were dying because of health rationing? Not as many, she replied, as the 45,000 Americans dying each year in a health-care system rationed on the basis of someone's ability to pay.

What about those notoriously brutal waiting lists? Another panel member, Canadian-American medicare critic Sally Stipes, had described how her mom died soon after a colonoscopy in Vancouver for which she waited for months.

Waiting lists are a problem, particularly for elective procedures, said Martin, but not one that's unique to Canada's single-payer system. For Americans without insurance, she said in a later interview, the waiting list could be forever.

"You know, I waited in line for more than 30 minutes to get into this building today," she told Republican Sen. Richard Burr.

"And when I arrived in the lobby, I noticed across the hall that there was a second entry point with no lineup whatsoever. Sometimes it's not actually about the amount of resources that you have, but how you organize (them)."

At one point, the committee chair engaged in some play-acting. Canadians, he said, are well-informed about American politics -- perhaps more so than Americans themselves. So are Canadians clamouring for U.S.-style health care?

No, Martin replied, to feigned shock from Sanders. "Is your prime minister a socialist?" he asked jokingly.

"No, sir," Martin replied, "our prime minister is quite conservative."

In Canada, she said, support for public health care cuts across party lines. Without specifically naming Stockwell Day or the 2000 federal election, she described how the leader of Canada's "most-right-wing party" once held up a sign during a TV debate saying, "No Two-Tier Health Care."

With the expiration of Canada's 10-year federal-provincial health accord, Martin said she hopes policy-makers take stock of what works and what could be improved, such as getting all provinces to include pharmaceuticals in medicare coverage.

Offering that kind of advice is about the extent of her public aspirations, she said, despite her successful turn on such a big political stage.

"Part of it is the Internet age, and how clips of these things can travel long distances quickly," she said of the reaction.

"But I also think that part of it is the whole conversation sort of struck a chord with Canadians... Nobody likes to see their system be unfairly criticized or mischaracterized."