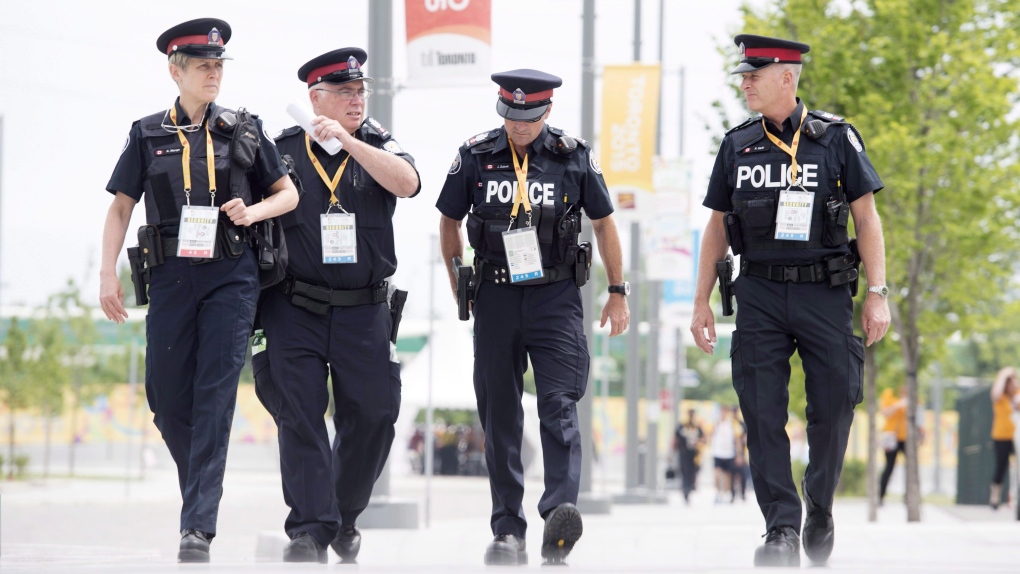 Police officers walk through the athletes' village at the 2015 Pan Am Games in Toronto on July 9, 2015. (THE CANADIAN PRESS/Darren Calabrese)

OTTAWA - Canada's police chiefs are pressing the Trudeau government to sign a new electronic data-sharing agreement with the United States to overcome hurdles in the fight against crimes ranging from fraud to cyberterrorism.

But the government and the federal privacy commissioner say more consultation and study are needed to ensure appropriate protection of personal information before taking such a step.

The Canadian Association of Chiefs of Police recently passed a resolution urging the federal government to negotiate an updated sharing agreement with the U.S.

The say cross-border access to information is one of the most pressing issues for law enforcement agencies.

The chiefs see an opportunity for a virtual leap forward following Washington's passage of the Clarifying Lawful Overseas Use of Data (CLOUD) Act. The new law allows the U.S. to sign bilateral agreements with other countries to simplify the sharing of information on criminal justice matters, as long as signatories have proper safeguards in place.

The chiefs say current procedures present challenges in the age of cloud computing and mobile devices, including delays in obtaining information from other countries and the growing tendency of service providers to store data in different places around the globe.

The chiefs point to two specific examples they argue highlight the "inefficiencies and delay" caused by the legal mechanisms now in place for Canadian authorities seeking information from sources abroad.

In one case, Google records related to a child pornography investigation were not received until 14 months after a legal assistance request was submitted, hindering the efforts of both the prosecution and defence. In another, it took 22 months to receive only a portion of requested Microsoft, Google and Yahoo records in a large fraud investigation.

The "cumbersome and time-consuming nature" of the legal assistance process fails to meet the needs of investigations, the chiefs said in a background document accompanying their resolution.

The document also states that the current system ignores the reality that not all states have specialized liaison offices to support the work of foreign police agencies.

The association is confident the U.S. CLOUD Act could open the door to an effective agreement between Washington and Ottawa that would respect Canadian constitutional guarantees and represent "a major step forward" in crime-fighting.

The chiefs are also encouraging the government to address cross-border access with additional countries through the Council of Europe Convention on Cybercrime, a framework for co-operation between more than 50 nations including Canada.

The Liberal government has conducted consultations on cybersecurity, but it has yet to address some key questions about how to ensure police and spy agencies have access to information that will help them solve crimes in the digital realm without trampling on privacy or charter rights.

A spokesman for Public Safety Minister Ralph Goodale said the federal government "acknowledges that digital technologies pose challenges to law enforcement," and it is committed to finding solutions that keep people safe while protecting personal privacy,

"We appreciate the input of the Canadians Association of Chiefs of Police on issues such as this one," Scott Bardsley said.

"Given the complexity of this matter, which involves various organizations and has privacy implications, additional time is required to review both the overall issue and the resolution."

Tobi Cohen, a spokeswoman for privacy commissioner Daniel Therrien, said that while the watchdog has not yet studied the police chiefs' proposal, alternative arrangements to the current international legal assistance process should not undermine privacy protections in Canadian law.

"Any new information-sharing agreement with the U.S. that has implications for privacy should involve consultation with our office," she said.

"We've also noted that international information sharing can lead to serious human rights abuses. That's why impartial oversight, in the form of judicial authorization for warrants and production orders, is critical before sensitive personal information may be turned over. We maintain the courts are best placed to balance the interests of the police and of individuals."