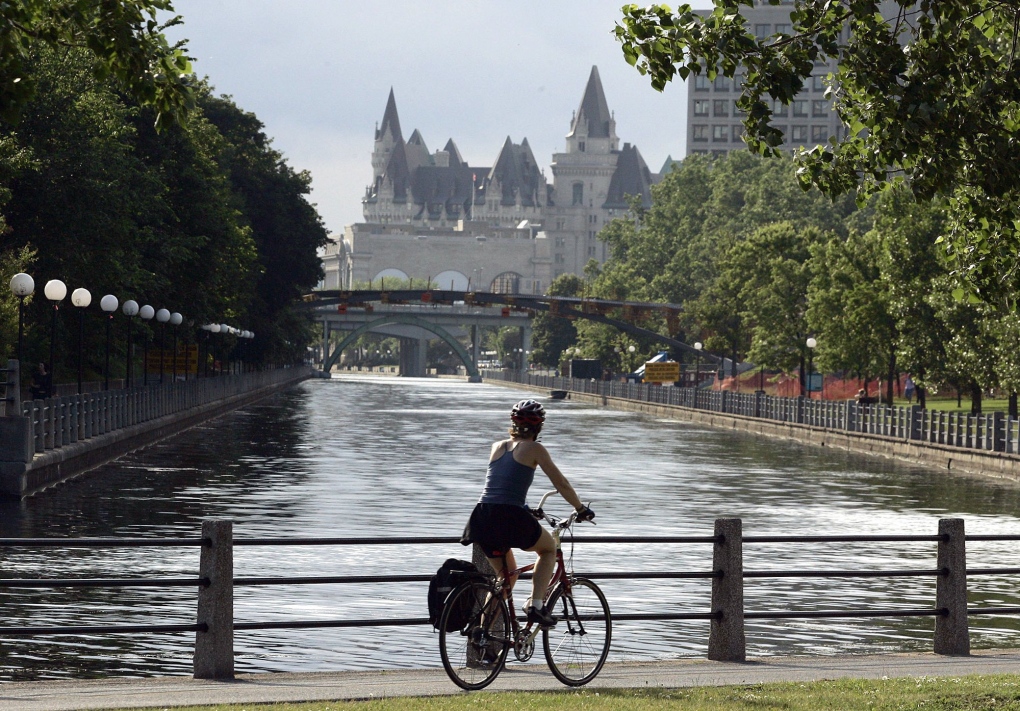 A cyclist pedals along side the Rideau Canal in Ottawa, Monday June 19, 2006, with the historic Chateau Laurier in the background, where the Rideau Canal flows into the Ottawa River. Ontario's Rideau Canal system, a 202-kilometre long historic waterway that is vying for recognition as a UNESCO World Heritage Site. (CP/ Fred Chartrand)

OTTAWA -- The Rideau Canal is a world heritage site but its picturesque waters flow under troubled bridges.

A newly released report says eight of the 11 historic bridges over the canal in eastern Ontario are in "poor condition or worse."

Timbers have split, trusses are bent, planks are riddled with severe rot, girders are rusted and corroded, mortar is crumbling.

"All eight of the structures are in inadequate condition," says an inspection report commissioned by Parks Canada from the engineering firm Delcan Corp.

The Burritts Rapids Swing Bridge, a steel-truss structure built in 1897, is typical of the decay Delcan found. The vehicular bridge in the village of Burritts Rapids, 65 kilometres south of Ottawa, was rated "inadequate" in both structure and function.

"Severe rot is present on the underside of the timber stringers," says the 2013 engineering report, obtained by The Canadian Press under the Access to Information Act.

"Four truss members are bent. The effect of these bent members on the capacity of the structure is not known."

A swing bridge is designed to rotate away from the canal as necessary, allowing tall-masted boats to pass through.

The report did not examine the many bridges crossing the canal not owned by Parks Canada, such as structures owned and maintained by the City of Ottawa.

Parks Canada, which paid Delcan $79,000 for the visual checks on the 11 bridges, says such third-party inspections are carried out every five years.

An agency spokeswoman did not answer directly when asked how much immediate, urgent work had been completed -- and for how much money -- as recommended by the report.

"Annual maintenance inspections and routine repairs are completed on the bridges and urgent repairs are addressed as required," Melissa Larose said in an email.

"This type of work is routine and funded by annual operating budgets and executed by Parks Canada staff."

Larose noted that the Feb. 11 federal budget included $391.5 million over five years for highways, bridges and dams at historic properties and parks operated by Parks Canada across the country.

The agency has come under fire in recent years for poor stewardship of its vast holdings, estimated in 2012 to require some $2.9 billion in deferred repairs.

A report by Opus International Consultants completed earlier this year found that Parks Canada has been understating the condition of those assets, with 61 per cent of its 2,000 cultural properties in poor or very poor shape.

The agency's internal 2012 inventory had listed only 31 per cent in such bad condition.

Larose said there are no "immediate" risks to the public in the use of the Rideau Canal bridges.

"Public safety is a priority for Parks Canada," she said. "No bridges are currently closed for safety reasons. All the bridges will be retained."

Parks Canada carried out its usual spring maintenance on its bridges in April and May, to prepare for the 2014 navigation season on the canal, Larose said.

The three highest-rated Rideau Canal bridges were listed by inspectors as in only "fair condition" structurally. The top three included the busy Hog's Back Falls swing bridge in Ottawa, built in 1978.

"The timber girders have medium-to-severe splits and checks on their underside," Delcan found after visiting the structure near Mooney's Bay.

"The south approach railings are not in line with the bridge railings, resulting in a vehicle hazard."

The Rideau Canal, stretching 202 kilometres between Ottawa and Kingston, Ont., was declared a UNESCO world heritage site in 2007.

The waterway with numerous locks was constructed between 1826 and 1832 as an alternate to the St. Lawrence River route between Montreal and Toronto, which was considered vulnerable to American attack from New York State.