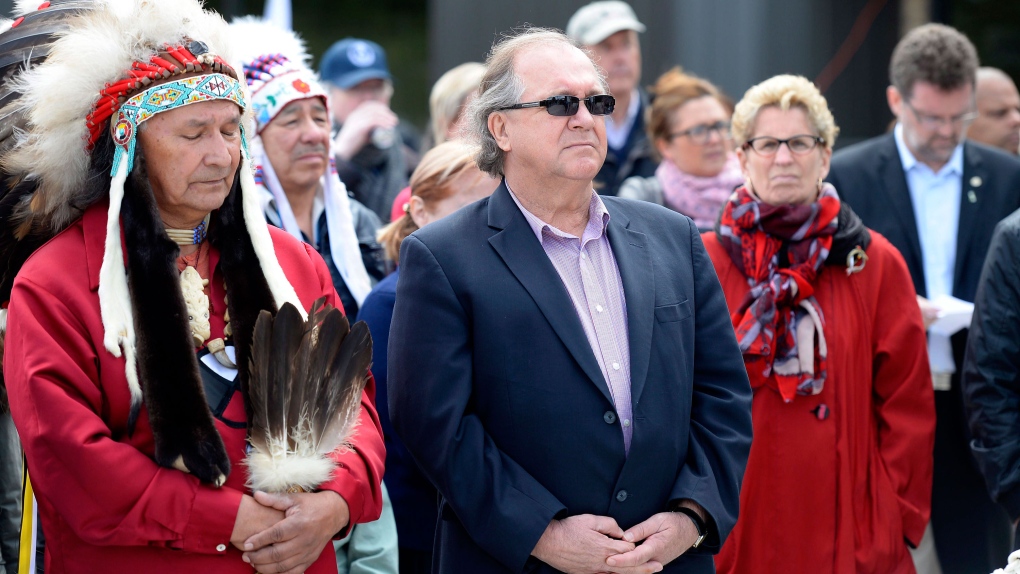 Traditional Chief Dominic Rankin of Pikogan, stands Minister of Aboriginal Affairs Bernard Valcourt and Ontario Premier Kathleen Wynne before the Walk for Reconciliation, part of the closing events of the Truth and Reconciliation Commission on Sunday, May 31, 2015 in Gatineau. (Justin Tang / THE CANADIAN PRESS)

EDMONTON -- The man heading the commission into the trauma caused by Indian residential schools says Ottawa plans to cut a program that helps survivors of the system to heal.

Justice Murray Sinclair said the program is for people who have told their stories of abuse at Truth and Reconciliation Commission hearings across the country.

Sinclair said the federal government is also balking at recommendations to improve mental health services that would help the extended families of these victims, especially in remote rural and Northern communities.

"Health Canada has decided on its own, without consultation with us or any other entity engaged in the Indian residential school settlement agreement, that effective this year, they are going to be terminating the Resolution Health Support Program, and leaving survivors who continue to experience personal difficulties after this event to essentially leave them on their own to find their own form of treatment," Sinclair told The Canadian Press.

"Our point is you can't expect people to heal immediately or to be able to overcome the personal difficulties they feel as a result of feeling those experiences again. And that healing is going to take some time."

Sinclair made the remarks during commission hearings in Edmonton being attended by hundreds of residential school survivors and their extended families.

During the hearings people who were forced to attend the schools have been recounting stories of sexual and emotional abuse they suffered and how it has affected them and their children and grandchildren.

Kim Quinney, the daughter of a residential school survivor, told the crowd about how she was sexually assaulted by a relative when she was seven years old, and that her abuser had himself been attacked while attending one of the schools.

Quinney said she eventually left home for the streets of Edmonton, where she became a crack cocaine addict, before seeking treatment and confronting her demons.

She said a support worker helped her find the courage to tell her story.

"I haven't been eating, sleeping right, been very emotional, and it has been difficult because of the fear," Quinney told the crowd as her children and other relatives stood beside her.

"It wasn't until I sat with a health support friend of mine earlier today. She told me, 'You are not doing it to hurt. You are doing it to heal."'

Federal Aboriginal Affairs Minister Bernard Valcourt said the federal government is committed to fulfilling the terms of the agreement it made to settle a class-action suit arising out of the residential school system.

Under that agreement the federal government apologized and set up the Truth and Reconciliation Commission to document the abuses. The process has included hundreds of support workers across the country.

"Canada is fully committed to fully respecting its commitment under the settlement agreement, and we will," he told The Canadian Press.

Health Canada said the federal government announced in 2012 that it would spend money on the supports program until March 31, 2016, to meet increased demand for emotional and health support services requested by eligible former residential school students.

"In recognition of the intergenerational impacts of residential schools, spouses, partners, children or other relations of former students who have experienced trauma associated with a family member's time at a residential school are also eligible to access support services."

Sinclair said the settlement agreement provides for ongoing health supports for residential school survivors who have signed a compensation agreement.

But he said there are other victims. These include the families of the survivors and others who attended the schools who were not eligible for compensation.

"The long-term health of aboriginal communities depends upon there being proper health supports being put in place. The government of Canada's response to this point has been that they feel that they have suitable existing programs in place," Sinclair said.

"We tend to disagree. Our point is until the settlement agreement was reached, those programs were always there, and they were failing. There is no reason to believe that they will suddenly change."

The commission released an interim report in February 2012 that included a recommendation to establish wellness centres that would specialize in childhood trauma and long-term grief for residential school survivors and their families and communities.

Sinclair said the commission keeps bringing up its concerns with the federal government, but to no avail.

"We have reiterated it at every meeting we have had and we will put it in our final report as well."