When the Austin family envisioned their new home in Ontario’s cottage country, they imagined their two young girls playing on a swing set in a big yard surrounded by nature.

What they didn’t imagine was that both of their daughters would quickly become ill thanks to a widespread infestation of toxic black mould in what was supposed to be their dream home.

“It’s devastating,” Bridget Austin told CTVNews.ca during a telephone interview on Wednesday. “You think you’re doing the right thing in life and moving forward and paying off debts and then everything goes up in smoke.”

In June 2018, the family of four moved from Grimsby, Ont. to a ranch-style bungalow sitting on 17 acres in the small community of Port Sydney, located just south of Huntsville, Ont.

Austin said the realtor told them the house had been built in 2016 and had never been lived in before.

Within one week of settling into their new home, Austin said both of her daughters, aged three and one at the time, developed fevers. Her eldest daughter was admitted to hospital where she was diagnosed with strep throat.

Despite taking medication, the girls continued to suffer from continuous fevers. 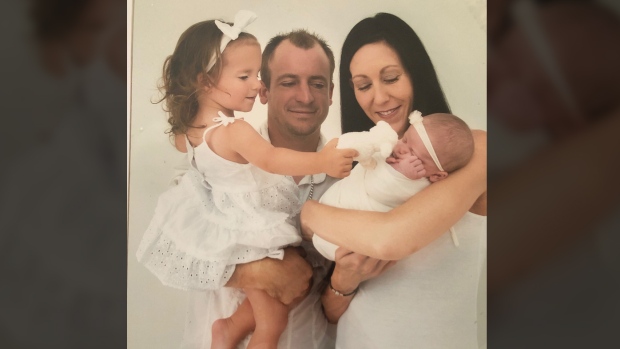 “The whole time we were in the home, they both were running about moderate fevers to high fevers,” Austin said. “We had no idea why.”

It wasn’t until a month later, when Austin’s husband and father-in-law began ripping up the vinyl flooring in the kitchen during the August long weekend, that they got a clue.

“We discovered black mould. It was growing up in behind the baseboards and the entire kitchen floor was black,” she recalled. 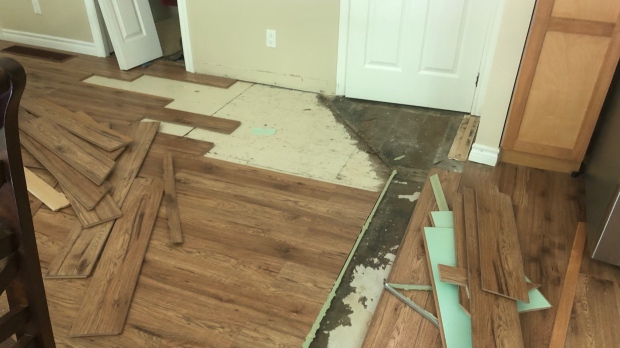 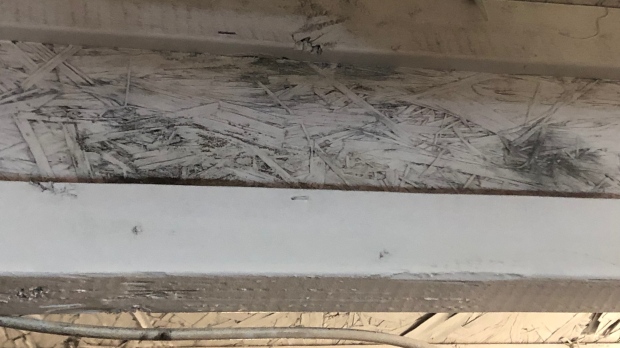 The family hired mould specialists who inspected the home and took samples. They discovered extreme levels of stachybotrys, or toxic black mould, as well as aspergillus, a fungus that can cause disease in people with weakened immune systems, damaged lungs, and allergies, and common penicillium, which can cause allergic reactions in people sensitive to mould, in the home.

“They basically deemed our house a tear-down,” Austin said. “They said that there is no amount of remediation that can be done to fix this home.”

Austin said they had no choice but to leave their home after only one month. Since then, the family has moved around several times before finding a townhouse to rent in Huntsville, where they currently live. 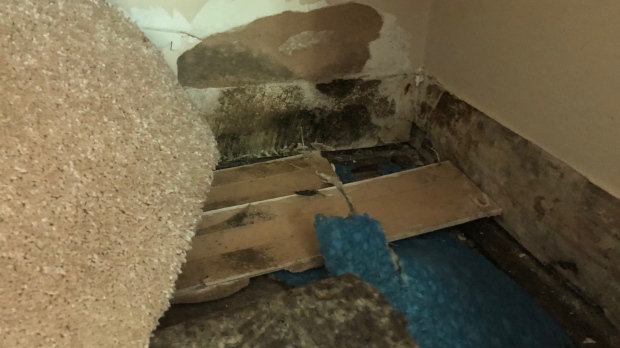 Shortly after the awful discovery, Austin said they returned to the mould-infested home to talk with the neighbours who told them the construction had been started in 2006 -- not 2016 as they were led to believe.

According to the neighbours, the foundation was poured in 2006 and left exposed to the elements for a number of years before a pre-fabricated modular home was delivered. The home was only partially completed and sat on the property without any siding for several more years. 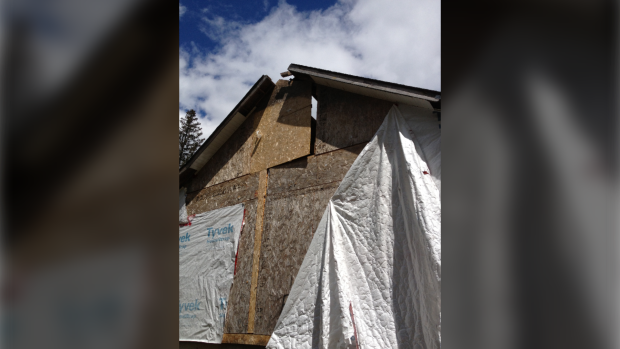 When the Austins turned to their insurance for help, they were told they wouldn’t be covered because the mould was preexisting in the house and a home inspector should have found it before they purchased it.

Austin said they had a home inspection conducted before the sale, but it didn’t find any mould.

The couple also appealed to their bank to allow them to pay interest-only payments on the mortgage, but they were turned down. They were also not allowed to pull equity out of the house because the bank was concerned they would lose that amount in addition to the mortgage, she said.

“We’re trying to survive paying rent, utilities on a rental and we’re also having to maintain a mortgage, utilities, property taxes all on our house at the same time,” Austin said.

Their only course of action, according to Austin’s insurance company, was to sue the builder who sold them the home.

The Austins have filed a lawsuit against the builder accusing him of covering up the mould before selling them the home. The legal proceedings are expected to take between two and five years, Austin said.

CTVNews.ca has attempted to contact the builder, but he has not responded to multiple requests for comment.

None of the allegations against him have been tested in court.

Austin said they have launched a GoFundMe campaign to appeal for donations because they’re struggling to make ends meet.

“Everything’s been ripped away from us,” she said. “We’re just at a loss. Our hearts are broken because of it. It’s very hard. We just don’t know what to do at this point or where to turn or where to go.”

What to know about mould

Mould can be difficult to detect during a standard home inspection because it’s not always visible and it can become dormant for extended periods of time, according to John Hansen, the president of the Ontario Association of Home Inspectors. 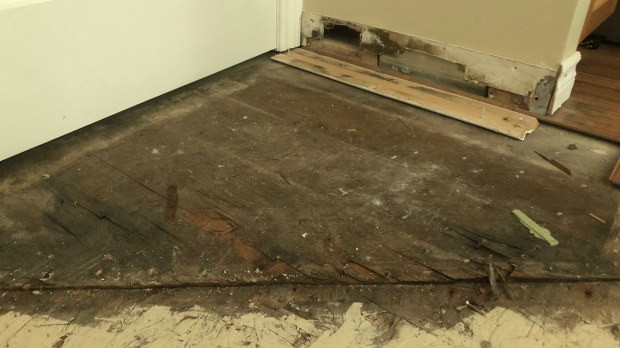 Hansen, a home inspector for eight years, said inspectors are not allowed to move or dismantle anything past what a typical homeowner could do, which means they can’t check under floorboards or inside walls for mould.

He said during a typical appointment, most home inspectors will use a moisture metre to look for elevated levels in the walls or baseboards. If there’s a disproportionate amount of moisture in one area of the home compared to everywhere else, Hansen said that could be a good indication that mould is present.

“It can be extremely difficult and sometimes impossible to see that there’s mould,” Hansen told CTVNews.ca on Thursday. “You’re testing for moisture, but if the moisture’s not there at the time of your inspection…”

Hansen said that if the air conditioning is on, for example, the moisture levels in the home may be reduced. 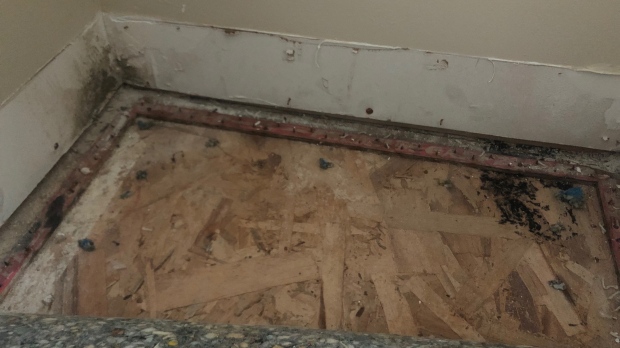 Hansen explained that the best way to identify mould with certainty is to have an air quality test conducted. He said air quality tests are usually an additional cost and not included in a typical home inspection.

“If mould is a concern as an allergen then you should consider having an air quality check of the house done at the same time as the home inspection,” he said.

Holmes said homebuyers should pay for the whole package when it comes to home inspections.

“You should be paying $1,200 - $1,500 for a home inspector to get a complete package,” the host of CTV's Holmes Family Rescue said. “This is the single most expensive investment of your life. What is $1,200 to $1,500 to get the right guy to do the right test to give you the right information?”

Hansen said homebuyers should also do their due diligence when hiring a home inspector. He said they should research their background, education, and whether they are registered in a recognized association.

Holmes agrees. He advised seeking a home inspector with a background in construction.

“A good home inspector knows the signs. He knows what to look for,” he said. “Get to know your home inspector before you even think of buying a house.”