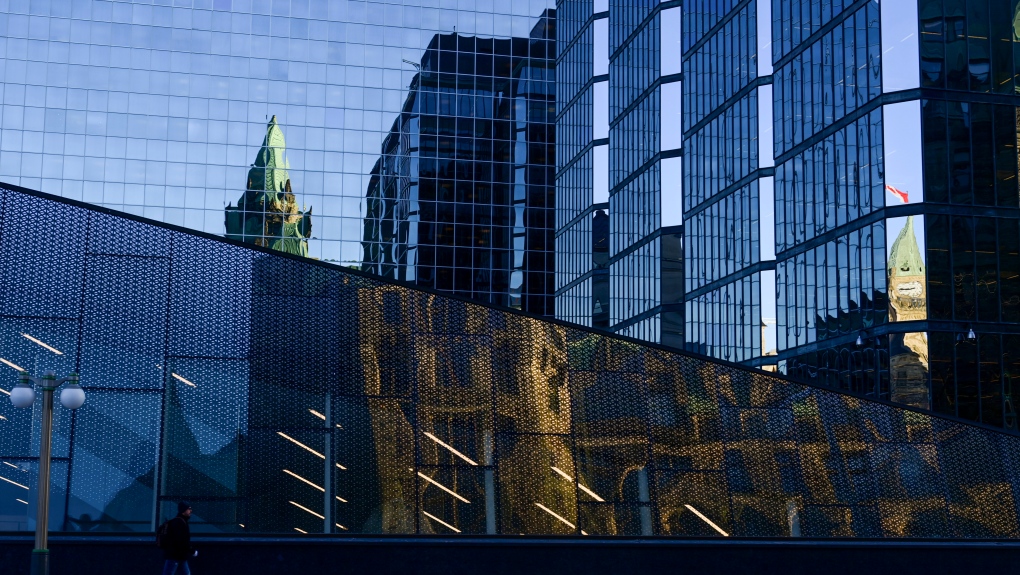 A pedestrian walks past The Bank of Canada in Ottawa on Tuesday, Dec. 15, 2020. THE CANADIAN PRESS/Sean Kilpatrick

OTTAWA -- Nine Algonquin First Nations in Quebec are considering litigation to stop Ottawa from allowing another Algonquin group to build a new suburb on the outskirts of the city.

Ottawa city council voted down a motion last week to have city planners further analyze a proposal submitted by the Algonquins of Ontario and a large property developer to turn 445 hectares of land about 20 kilometres outside the city into a new community.

That put the property on the city's list for future construction.

While Ottawa Mayor Jim Watson has described the project as a step towards reconciliation, Algonquin First Nations north of the Ottawa River in Quebec say they have not been consulted.

The Algonquin Anishinabeg Nation Tribal Council, which represents nine federally recognized Algonquin First Nations in Quebec, met Thursday to discuss how to stop a project they consider an infringement on their rights in their historical land.

"We would still very much like to have that dialogue with the City of Ottawa," Chief Lance Haymond of the Kebaowek First Nation said in an interview with The Canadian Press.

"We also took the opportunity yesterday to have a presentation from a lawyer, legal adviser, as to what our potential options are in terms of litigation."

Haymond said the Algonquins of Ontario include only one federally recognized First Nation and do not represent the Algonquin nation as a whole.

The group was created more than 10 years ago by Ontario and the federal government to negotiate the resolution of a land claim covering a vast swath of eastern Ontario, including all of Ottawa. Besides the recognized Algonquins of Pikwakanagan First Nation, the body also represents nine other Algonquin communities. It's worked with developers on smaller projects in Ottawa before.

"There's nine communities that are being left out that and forgotten in this process," Haymond said, referring to the Algonquin nations in Quebec.

He said the Algonquins once controlled all of the Ottawa River watershed and Ottawa Valley and they've never entered into a treaty and never been conquered. The provincial boundary down the middle of the river is a relatively recent creation.

"We profess to have underlying rights and title to the territory," he said.

He said the Algonquins of Ontario bought the property on the outskirts of Ottawa and used the city's planning process to get a development advanced under the guise of reconciliation.

"From our perspective, this is a straight, straight-up, land, real-estate deal between developer and the City of Ottawa," he said.

The proposed project is not close to existing infrastructure or transit service, though the proposal includes a promise to pay for transit.

"The City of Ottawa and the development company are using the Algonquins of Ontario and the process of reconciliation to have these lands brought into the urban plan," Haymond said. "It's a dirty kind of sneaky way of getting a project approved, that otherwise would have been rejected based on the city's own criteria."

But Chief Wendy Jocko of the Algonquins of Pikwakanagan First Nation said the project will be transformational, allowing Algonquin people to take "their rightful place within the economic fabric of Canada's capital city."

She said Indigenous people should be financially independent to achieve "true reconciliation," and the project demonstrates that the Algonquin people are capable of building successful businesses and communities.

"Our Algonquin cousins in Quebec have been particularly vocal, suggesting we do not have the right to make decisions about our own traditional territory," she said in a statement.

"While we respect their right to be heard, we are disappointed by their decision to publicly air their opinions about (the project) without engaging in a discussion with us first, and we categorically disagree with their claims."

Kirsten Anker, a professor of Indigenous law at McGill University, said Indigenous people have suffered from colonial practices. Those include governments that deal with small local Indigenous groups rather than negotiating with tribal councils that represent large numbers of people.

"That pattern of divide and conquer, I mean, there's no question that that is part of the story here," she said.

"Splitting up communities, fostering political division in communities, in order to facilitate a group who will say yes to development is the pattern that you see over and over."

She said Ottawa city councillors and the mayor should be aware of this historical context when making decisions that affect Indigenous people.

"It's just too appealing to deal with the group that's in front of you, providing appealing options for development and that you can also tick the box on reconciliation as well, I can see how that it's a kind of self-interested blindness."

Haymond said although the mayor has labeled the project as reconciliation, the real beneficiaries of this development are the city treasury and Taggart, the development company that partnered up with the Algonquins of Ontario.

In a statement relayed by his office, Watson said he looks forward to seeing the Algonquins of Ontario benefiting from the project, noting that he will meet with Algonquin chiefs from Quebec and Ontario in the coming weeks and months to listen to their concerns.

Jocko said the Algonquins of Ontario don't want to prohibit or exclude the Quebec Algonquins from pursuing development opportunities or asserting their presence and jurisdiction in Ottawa.

"Personally, I would love to see the day that there are sustainable, prosperous developments owned and controlled fully and jointly by the Algonquins in Ontario and Quebec," she said.

"Even with these recent tensions, I will not allow this to be stricken from the realm of the possible."

This report by The Canadian Press was first published Feb. 20, 2021.