Misconduct hearing begins for Toronto cop over G20 'kettling' in 2010 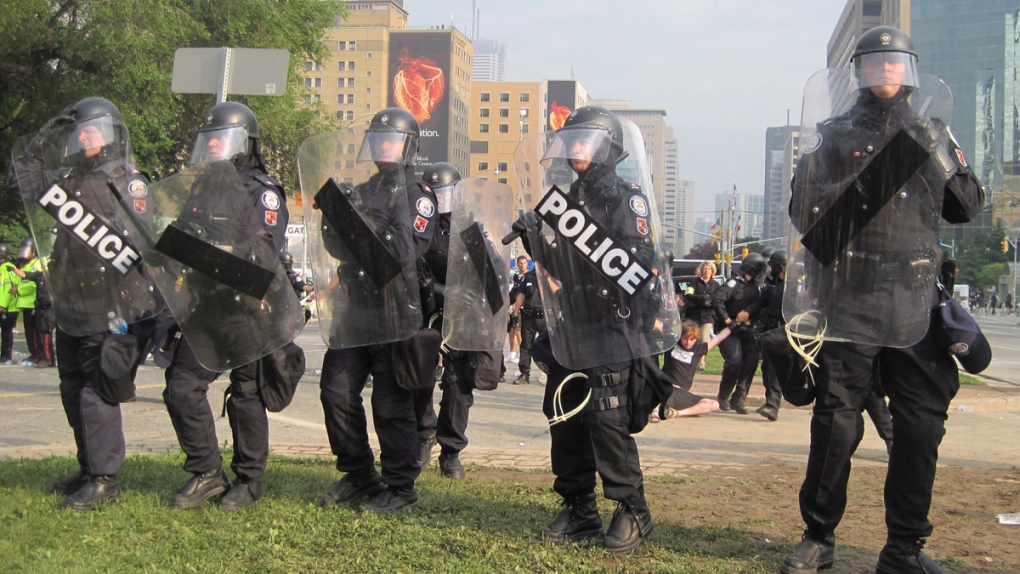 TORONTO -- A senior police officer who ordered the arrests of hundreds during Toronto's G20 summit four years ago had no regard for their conduct or intentions when he issued his sweeping commands, a prosecution lawyer told the officer's disciplinary hearing on Wednesday.

Supt. Dave (Mark) Fenton has pleaded not guilty to a total of five charges of unlawful arrest and discreditable conduct stemming from two "kettling" incidents that occurred over the summit weekend.

Fenton ordered officers to box in protesters in front of a downtown hotel. More than 260 people were arrested and taken to a makeshift prisoner processing centre, which came under severe criticism for its deplorable conditions.

The second incident occurred the next day when, six minutes after coming on shift, Fenton ordered police to keep scores of people standing for hours at a downtown intersection despite a severe thunderstorm that left them drenched.

"The order made in each case was, the evidence will show, indiscriminate," prosecution lawyer Brendan van Niejenhuis told the hearing taking place at Toronto Police headquarters.

"The composition of the crowd was mixed...some were passers by, others were curious onlookers who stopped to see what was going on and some undoubtedly were protesters."

At the heart of the hearing, Van Niejenhuis argued, is one "ultimate question" that must be addressed by retired Ontario Superior court judge Peter Grossi, who is presiding over the case.

"Were the arrests lawful and necessary, and did they constitute conduct that would lower the esteem of the Toronto Police Service in the eyes of the public," he said.

Lawyers for some complainants -- who were caught up in the mass detentions -- also addressed the hearing, arguing that Fenton's actions were overly broad and led to the violation of people's civil rights.

"Normal bystanding citizens were kettled and detained without any plausible reason for doing so," said Adrienne Lei, counsel for three complainants.

"Our position is that it was an egregious abuse of power under the guise of public order policing. It was excessive, without any lawful authority and did not consider what actual circumstances on the ground called for."

Fenton also repeatedly referred to the protesters as "terrorists" over the summit weekend, Lei added.

"The policing model ordered by Fenton was designed, structured and implemented to violate the rights of citizens," Lei argued. "These are the hallmarks of a fascist totalitarian regime. This is not Toronto."

Fenton's defence lawyer, however, cautioned that the disciplinary hearing was not a public inquiry.

The hearing is only dealing with the two issues, Peter Brauti said -- whether Fenton had grounds to issue the arrest orders, and whether he failed to monitor the processing and detention of those who had been arrested.

Brauti also noted that it was also important to remember that Fenton was only working with the information he had.

"Accurate, inaccurate, what was the information that he had, what was his decision based on?" he asked. "That goes to the core of this case."

In a statement to civilian oversight investigators, Fenton has said he had no option to the mass arrests to make the city safe.

The officer, dressed in his uniform, sat beside his lawyers as his hearing got underway, addressing the room only to plead not guilty to the charges he faces.

More than 1,000 people were detained over the summit weekend in what is considered the largest mass arrest in Canada's peacetime history. Most were released without charge.

One of those was Matthew Beatty, a 36-year-old teacher who was acting as an observer at a peaceful protest outside the hotel where the first incident took place.

Beatty was among the first witnesses to testify at Fenton's hearing and described the rising panic in the crowd as people realized they were being hemmed in by officers on all sides.

"We asked them to let us go by and they'd say go the other way...it was at that point we realized we were trapped."

Beatty testified that some of the people around him appeared to have little to do with the G20 protests, including a 16-year-old who borrowed his phone to call his mother and a man who had just stepped out of a nearby restaurant.

The tension in the crowd only got worse as police began randomly grabbing and arresting individuals, he said.

"I remember hearing fearful screams from women, people yelling 'watch it,"' he said. "I remember yelling to the police officers, saying...'what do you want us to do?"'

Eventually one officer told the crowd that everyone needed to stand out in the street, put their hands behind their head and slowly back up to the police line in order to be arrested -- that helped defuse the situation somewhat, Beatty said.

When he was arrested, officers bound his hands with plastic ties, shackled his ankles, and placed him on a bus that took him to a detention centre where he spent about 17 hours in a cage with other detainees before eventually being released without any charges.

Fenton's lawyer pointed out to Beatty that he had known little to nothing about the background of most of the people he was detained with and couldn't have known if they had plans to commit violent acts.

"Correct," Beatty responded. "My issue is that if that intelligence existed, it seems to me there's a big jump between 'we have feelings these individuals are doing x, y, z' and 'that necessitates the arrest and incarceration of 260 people."'

Fenton's disciplinary hearing is expects to last for six weeks.