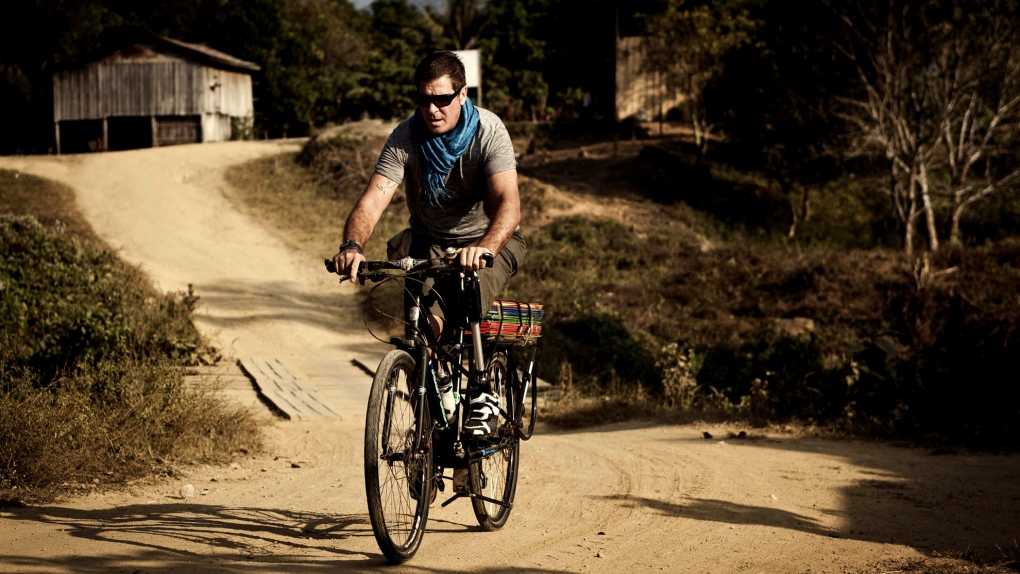 Almost 15 years ago, a motorbike accident in Italy left Stephen Sumner with an amputated left leg and a strange, debilitating condition known as phantom limb pain.

That condition, the 58-year-old told CTVNews.ca, soon became “the worst aspect of my entire life.”

“I was just getting destroyed by it,” Sumner said via telephone from his home in Vancouver. “I was very literally suicidal at a certain point.”

Sumner said he tried -- and failed -- to mollify the constant and excruciating pain with an admixture of alcohol and stoicism.

“I was just trying to mind over matter it,” he said. “It just wasn’t working.”

That continued for years until in a bout of particularly unbearable agony, Sumner went online and discovered mirror therapy: a treatment in which an amputee uses a mirror to reflect a remaining limb, essentially tricking their brain into thinking that that an amputated arm or leg is still there.

“I felt, ‘Oh my god, it’s there again!’ -- I felt better,” Sumner recalled of his first mirror session. “It’s now been eight years and I’ve been almost totally pain-free.”

The therapy also helped Sumner -- who has worked as everything from an English teacher to a bicycle salesman to a longshoreman -- find his calling in life.

“I would say from significant experience that… amputees are faced with almost boundless hardships,” he said. “A lot of these people feel that they’ve been abandoned by everything and everyone.”

Wanting to share this “life-changing” treatment, Sumner has since taken multiple months-long trips to war-scarred countries across Asia, Africa and the Middle East where he gets on a cargo bike laden with custom-built acrylic mirrors to search out others suffering from phantom limb pain. So far, he’s delivered well over 2,000 mirrors to fellow amputees.

“I’m almost like a missionary, if you will,” Sumner said. “I feel that I’m bringing something to somebody that’s very, very important.”

When asked to describe what phantom limb pain feels like, Sumner screams over the phone.

“That’s a reflection of what’s commonly referred to as ‘electric shock pain,’ which is the worst style of phantom limb pain,” Sumner said.

There are also sensations that he refers to as crushing, cramping and burning. Pain events, Sumner said, are cyclical and can last for days -- and nothing, not even pharmaceuticals, can make them go away. Sumner first shared mirror therapy on a 2011 bicycle trip through Cambodia. The small Southeast Asian country has the inglorious distinctions of being the second most landmine-riddled country in the world as well as having the most amputees per capita -- legacies of a series of bloody and protracted conflicts that started in the 1960s with the American war in neighbouring Vietnam and ended only with a UN-backed civil war peace deal in the 1990s. Sumner has been back to the country numerous times since.

Sumner explains mirror therapy like this: you simply have to sit with a mirror positioned in such a way that you only see a whole limb being reflected where an amputated limb used to be. And then you meditate, perhaps trying to move the phantom limb, or perhaps just contemplating the image of your whole self until you enter a relaxed state.

In cases where someone has two arms or legs missing, Sumner will recruit a young relative or volunteer to sit in that persons’ lap to provide the reflection. And wherever Sumner goes -- whether that be Laos, Ethiopia or Lebanon -- he leaves extra mirrors at clinics and hospitals while teaching others how to share this therapy. He also offers a guarantee of sorts: spend 10 minutes in front of your mirror twice a day for a total of five weeks, “and then you can reasonably expect that your pain will be, if not gone, then it will be radically diminished and that you more than likely won’t have to repeat the treatment at all.”

“They might have been living with this agony on a daily basis for 35 or 40 or 45 years in some cases,” Sumner said. “This is life-changing stuff.”

MIRROR THERAPY AT A GLANCE

Mirror therapy was pioneered in the 1990s by neuroscientist Dr. V.S. Ramachandran and his colleagues at the University of California, San Diego.

While it has anecdotally proven to be effective, on a scientific level, the therapy remains poorly understood. Still, it -- and similar virtual reality-based therapies -- are even being used in places like Canada. “Almost all adult amputees, after they have an amputation, will experience phantom limb pain or sensations,” Mayo said.

For most, Mayo adds, that pain will decrease over time.

“But there are some patients that have a chronic debilitating phantom limb pain that will persist,” she said.

According to Mayo, her patients describe their phantom limb with “classic nerve pain characteristics” such as “burning, numbness and tingling (and) electric shocks.”

“When you have an amputation, the nerves are still there, right?” Mayo explained. “So when you lose your leg, they cut the nerves, but the nerves are still sending signals up your spinal cord into your brain, and your brain is still thinking that the foot’s there… So it will be sending pain signals that can either present in the residual limb or sort of shoot and you get this phantom limb sensation or pain.”

Mirror therapy, Mayo says, works by both “retraining the brain to what the new norm (of) the body is” and creating a distraction “from the painful sensations that (patients are) experiencing.”

“We’re playing along with the motor-sensory cortex in the brain and trying to sort of rewire it through guided motor imagery and mirror therapy,” she said. “So (in) a lot of mirror therapy, they’ll be sort of relaxing their intact limb on the other side, because a lot of the sensation that patients describe is like their foot is cramping or their fists are clenched. The therapist will (then) sort of work the patient through with their intact limb to relax (their) hand or move it in a relaxing way.”

And while it does not necessarily work for everyone -- especially patients who are intellectually disabled or have multiple amputations -- it remains an important tool at her amputee rehabilitation clinic.

“It’s always worth a try to see if it will help,” Mayo said. “I think anything is good for pain management, especially when we’re looking at non-pharmaceutical options… A lot of these patients get inappropriately prescribed opioids for phantom pain.”

Sumner is currently sharing mirror therapy with fellow amputees in northern Sri Lanka -- a region that was racked by a vicious civil war between 1983 and 2009 -- as part of a months-long journey that began in November and will also take him and his cargo bike to countries like Myanmar and Vietnam. “I ride up into the provinces and search out more hospitals, more clinics and even more villages,” he said. “(I’ll) ride through some of the most beautiful country on earth.”

Although he has received some financial support from local NGOs and groups like the International Committee of the Red Cross, he funds his trips largely through private donations and his own scanty savings.

“I’ve never ever had more than two nickels to rub together, it seems,” Sumner said. “I’m just a guy with mirrors who’s an amputee that doesn’t suffer from phantom pain.”

Still, Sumner persists and will continue delivering mirrors on this trip until his funds run out and he is forced to return home to Vancouver.

You can follow Sumner’s journeys through his Facebook page and website, www.meandmymirror.com, where he also blogs and accepts donations. Sumner’s custom-built acrylic mirrors cost between $10 and $25 to produce, and he almost always gets them locally made.

“In my mind, I can’t believe the fact that I’m the only guy in the world that does what I do,” he said. “In my mind, there should be an army of me out there.”