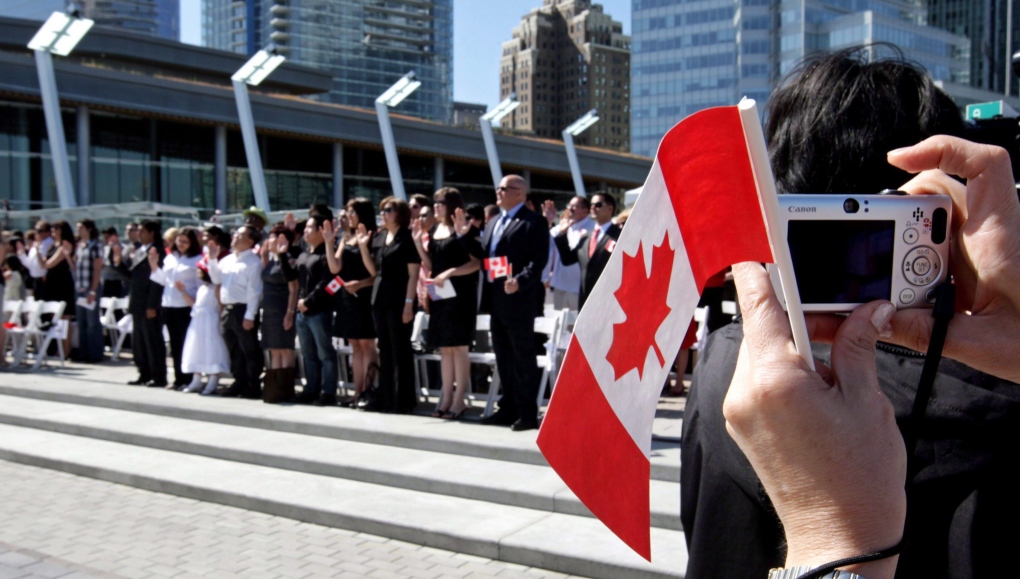 A woman takes a photograph while holding a Canadian flag as a group of 61 new Canadians take the oath of citizenship during a citizenship ceremony held as part of Canada Day celebrations in Vancouver, on Wednesday, July 1, 2009. (Darryl Dyck / THE CANADIAN PRESS)

OTTAWA -- The Liberals have raised the cap on the number of applications the government will accept for the coveted parent and grandparent visa program.

The immigration minister issued formal instructions Friday that this year and in each year going forward, 10,000 applications will be accepted, up from 5,000 in each of the previous two years.

Raising the cap on applications was a promise the Liberals made during the election campaign.

The move signals that the broader Liberal plan on how many immigrants Canada will accept in 2016 is likely nearing release, as Immigration Minister John McCallum had previously said the two were connected.

The parent and grandparent visa program is one of the most popular immigration streams but in 2011, the previous Conservative government shut it down, citing problems with the program and a need to work through a massive backlog in applications.

When they reopened the program in 2014, they made a number of changes, including increasing how much money someone is required to have before sponsoring a parent or grandparent, and how long that support must be guaranteed.

But the most criticized step was a cap on new applications at 5,000. The Liberals had promised to increase it during last year's campaign.

They had signalled the move was coming in January, when rather than cutting off intake of new applications at 5,000, they accepted over 14,000.

The first 10,000 complete files will be processed on top of those already in the system.

According to information on the Immigration Department's website, they are still working through files received before Nov. 4, 2011.

"These instructions contribute to a strategy to facilitate family reunification and fulfil the Government of Canada's commitment to double new application intake to a maximum of 10 000 applications annually," say the ministerial instructions for the new cap, published online Friday afternoon.

While the instructions change the cap, they don't change any other elements of the program, including the applications will be processed on a first-come, first-served basis.

This has created a lucrative business for couriers who are charging hundreds of dollars to guarantee an application is first in the queue.

After a public outcry earlier this year, McCallum had said he would look into if any changes could be made in future years, but noted the increased cap would ease some of the crunch.

In 2014, the last year for which full figures are available, just over 18,000 people were admitted into Canada under the program.

How many people will actually come to Canada this year under the program will be contained in what's known as the immigration levels plan, a document the government is required to publish each year by Nov. 1.

Since the House of Commons was not sitting then because of the election, the Liberals now have until March 9 to publish the information.