Lac-Megantic train derailment: What we know so far

The company that owns the train that exploded in Lac-Megantic, Que., says a locomotive shutdown may have released the air brakes that were supposed to hold the 73-car train in place.

Investigators have yet to confirm the cause of the accident.

Montreal, Maine & Atlantic Railway, or MMA, acknowledged that it does not have “complete information” about the chain of events that led to Friday’s disaster. The company said the government’s investigation into the derailment has “largely prevented” it from completing its own probe.

However, company chairman Edward Burkhardt told CTV News Channel that a small fire broke out on the locomotive that had to remain idling in order to maintain brake pressure on the train as it was stopped for the night, 13 kilometres away in Nantes.

“Based on the information that we have, we have a pretty good idea of what occurred, and that is that this train was parked, being held in position with hand brakes and with an air brake set on the locomotive. All of this was in accordance with our operating rules,” Burkhardt said in a telephone interview from Chicago.

Burkhardt said firefighters put out the small fire with handheld extinguishers and then shut down the idling locomotive without asking for permission. As the firefighters were on their way back from the scene, they met a company official they had asked to meet them and informed him of what they had done.

“When the locomotive shut down it was just a matter of time until the leakage of air out of the brake cylinders would allow the brakes to release, and that’s exactly what happened,” Burkhardt said.

Burkhardt said a dozen members of company management are at the scene, and he plans to travel to Lac-Megantic on Tuesday.

Investigators are still trying to piece together exactly what happened. But what is known for sure is that the train carrying crude oil was parked and locked down on the tracks in Nantes late Friday night. The conductor left the train and went to a hotel for the night.

Around 11:30 p.m., firefighters responded to reports of a blaze on the train’s locomotive. Shortly after 1 a.m. Saturday, the train somehow came free and made its way to Lac-Megantic, where it derailed, caught on fire and sparked a number of massive explosions.

On Monday evening, Quebec provincial police announced that the death toll so far is 13, with nearly 40 people still missing. The blaze destroyed about 40 buildings and flattened a large section of the town.

It’s not yet clear what caused the first fire and what role, if any, it may have played in the subsequent derailment.

Donald Ross, the Transportation Safety Board's investigator in charge, has said investigators are looking at the state of the train's air brakes and hand brakes, and the engineer will likely be interviewed.

According to the BNSF Railway rulebook, widely considered the industry standard, engineers are required to use hand brakes to ensure a train is secure against undesired movement, and "the air brake system must not be depended upon to prevent an undesired movement.”

The train in question was built by General Electric in 1979 for Atchison, Topeka and Santa Fe Railway company based out of Chicago. It was then sold to MMA Railway in July 2007. CTV News has confirmed the train originated in North Dakota and travelled through Toronto and Montreal before the derailment.

Investigators from the Transportation Safety Board have managed to recover the train's black box, though officials from the agency have not yet speculated on what might have caused the accident.

Transport Minister Denis Lebel said a "full investigation" is underway and the agency is in contact with MMA.

“If anyone is found to have contravened any federal transportation regulations we will take immediate steps to enforce those regulations,” Lebel told reporters in Lac-Megantic Monday evening.

Lebel denied accusations that the federal government had cut rail inspectors, saying “that’s false, we have not cut any inspectors.” He noted that the locomotive in question had been inspected on July 5 and no problems were found.

He said rail safety regulations have been tightened, but has asked department officials to look at what measures, if any, can be taken to further improve rail safety.

“We will learn from this incident and we will take action,” he said. 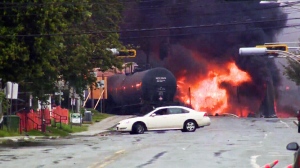 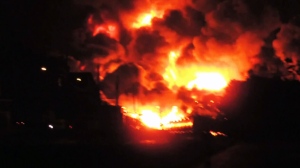 Dramatic photos and videos from Lac-Megantic