How soccer is helping young immigrants feel at home in Canada 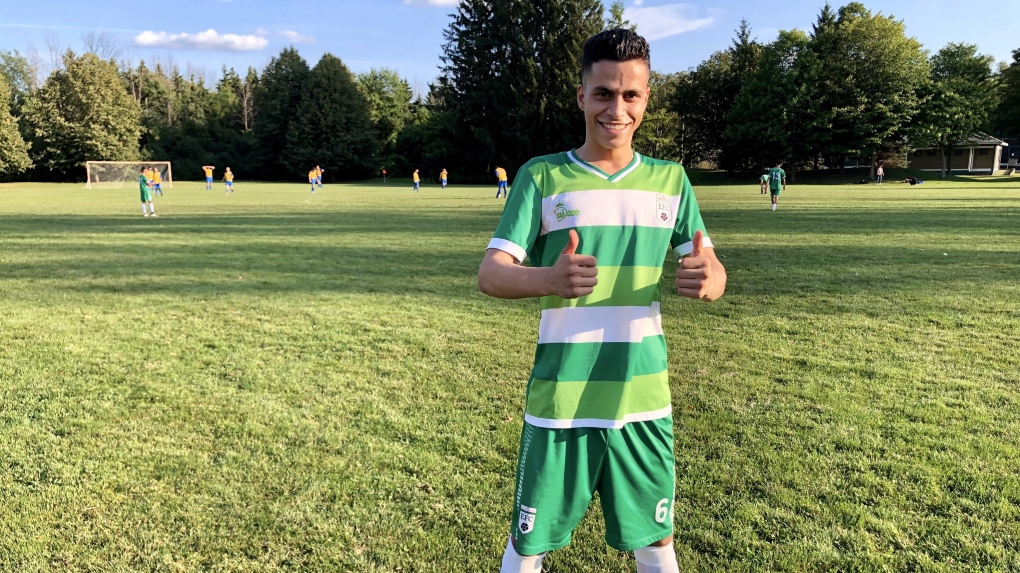 Omran Alahmad gives the thumbs up at a soccer field in Ottawa, Sunday, Aug.11, 2019. Omran Alahmad has played soccer every week since his arrival in Ottawa almost four years ago, much the way he did as a boy growing up in Syria.Alahmad. (THE CANADIAN PRESS/Maan Alhmidi)

OTTAWA -- Omran Alahmad has played soccer every week since his arrival in Ottawa almost four years ago, much the way he did as a boy growing up in Syria.

Alahmad, 18, travelled through Jordan to come to Canada in 2015 with his parents and five siblings, but he was determined that it wouldn't mean giving up on the sport he's played since he was just three years old.

"I've been playing since I was three years old," he said. "We started playing on the street."

Before long, Alahmad soon found himself a member of Eagles FC -- a soccer club comprising nearly 60 newcomers to Canada, including immigrants and refugees, that established itself as a full-blown club last September.

"I used to see kids playing soccer in the park -- some of them were really talented," said team manager Noor Sakhniya, who helped the players in establishing their own club. "They couldn't play with a club because they couldn't afford it."

The registration fees at Ottawa soccer clubs vary between $600 and $2,000, he said: "That's a lot of money for an immigrant family that has two or more kids who want to play soccer."

Immigrant kids risk ending up spending a lot of time on the street if they aren't occupied by a sport they like, said Sakhniya. "When we make them commit with the team at least for two or three days a week, we save them from troubles."

The number of soccer players in Canada is growing every year. According to the Canada Soccer Association, there were more than 810,000 registered players, coaches and referees involved in soccer in the country in 2018.

Much of that popularity has been driven by immigration. Nearly 7.6 million foreign-born individuals who took part in the 2016 census said they came to Canada through the immigration process, representing 21.9 per cent of Canada's total population -- a proportion that continues to overtake the 22.3 per cent recorded during the 1921 census, the highest level since Confederation.

Some of the immigrant players have pursued soccer in different countries. Abbas Ali, 20, is a computer engineering student. He's played soccer in Syria, Turkey and Canada since he fled war-torn Iraq 16 years ago.

"I'm going to carry on (playing soccer), for sure," Ali said.

The time he spends playing the game is an opportunity to make friends and to engage in other social activities with his teammates. "These guys are all my friends," he said, gesturing towards his teammates.

Sport is a social institution that brings people together and it's a part of the culture, said Karen Foster, a sociologist at Dalhousie University in Halifax. "It can help people get out of isolation."

Foster said familiar social activities are vital in helping immigrants integrate into Canadian society, and are especially important for teenagers who are likely feeling displaced and don't have as many opportunities to get involved in activities without their families.

The men's team is now competing in Ottawa Carleton Soccer League -- "our goal is to qualify to Ontario Soccer League," said Sakhniya -- and the club has already established three other teams for kids under 12. "We are going to start a team for girls as well."

The club is a not-for-profit organization, so the players are only charged for the cost of the activities including the league participation fees. The next thing is to find a sponsor, he added.

"It's the most growing sport (in Canada), and immigrants need to tap into this sport to help their new country. We have some excellent players, who are 14 to 16 years old. They could go play for university teams, famous clubs and even the national team when Canada co-hosts the 2026 World Cup."