From burnings to beatings, homeless people face violence on the streets 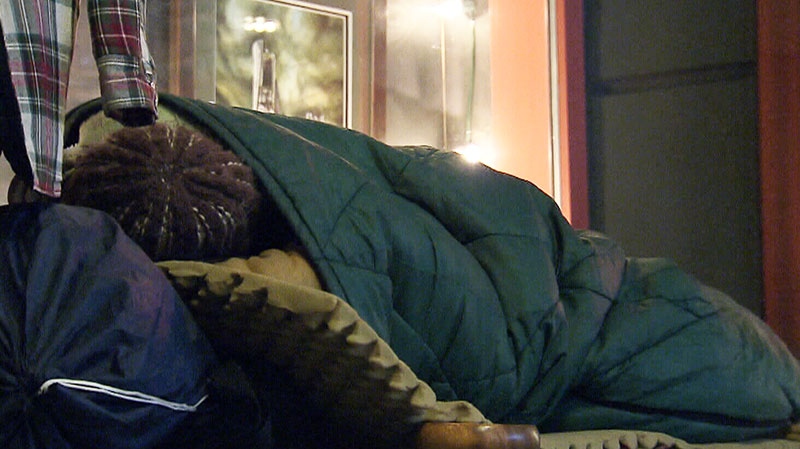 Tyler Dunlop says his moment of terror came after he passed out in the back parking lot of a building in Edson, Alta.

The 30-year-old homeless man says he awoke to the sound of taunts as he was being punched and kicked by four intoxicated youths.

"They ganged up on me and beat me within an inch of my life," he said of the beating in 2011, which he didn't report to police.

Dunlop's brush with violence offers a glimpse of the dangers faced by people living on the streets.

On Tuesday, two men in Nova Scotia will be sentenced after they pleaded guilty to second-degree murder in the slaying of Harley Lawrence, a 62-year-old homeless man set on fire as he slept in a bus shelter in Berwick northwest of Halifax.

Daniel Wayne Surette, 27, and Kyle David James Fredericks, 26, admitted in an agreed statement of facts that they doused Lawrence in $10 worth of gas before setting him on fire in October 2013.

Ian Burton says he almost experienced something similar when he was living on the streets in Halifax in the fall of that same year.

Burton, 30, says a youth came at him one night with a bottle of hair spray, flicking a lighter in an attempt to set him alight as he stood on a wharf downtown. He managed to flee but he says the episode served as a reminder of how dangerous it can be to live on the streets.

"The streets have a territory-like feel to it," Burton says.

Statistics Canada does not track murders, assaults and sexual assaults committed against homeless people. But people who live on the street and their advocates say they happen frequently.

"We have a lot of work to do in protecting vulnerable Canadians," says Tim Richter, the president of the Canadian Alliance to End Homelessness, which estimates about 235,000 people lived without shelter last year.

In downtown Toronto, Joe Sallai says he's lived on the streets since he was 16 and has been kicked, hit and spat on. He has seen people hurl bricks at other panhandlers.

"I've seen them get pulled by their hair and stuff just because they were panning," he says. "Somebody wanted to be ignorant and walk by and do it. I've seen it happen quite a few times."

Life descends into a constant state of wariness, Sallai says.

"If not, they'll just catch you off guard and that'd be it."

Stephen Gaetz, director of the Canadian Observatory on Homelessness at York University in Toronto, says alarm bells should be going off for policy-makers and police after a municipal study in Waterloo, Ont., last fall.

Of 281 people surveyed, 41 per cent of them said they were a victim of a violent attack since becoming homeless. Some of the violence involved homeless people beating each other up, he said.

"If that was my neighbourhood or your neighbourhood I kind of feel like there would be troops on the streets," Gaetz said. "We would see that as a crisis."

Christina Murray, who was homeless but now has housing in Halifax, says violence can break out among people who are competing for privacy in shelters and space on sidewalks.

She says she knows firsthand what it's like to be assaulted in such a situation.

"I was at my friend's and she was letting me stay there and another girl came in and she wanted to stay there," says Murray, 57.

"This fight started and she got a hold of my hair and pulled out a garbage pail full of my hair."

Dunlop says each outburst of anger and violence leaves lasting trauma, adding that he feels nausea and fights off panic attacks when a "loud or vexatious" youth approaches him.

"It is a fear behaviour, with people trying to unconsciously eliminate the threat of homelessness in their own lives by harming those who remind them of it," he says.

Questions and answers on violence against homeless people in Canada

Question: What can police and governments do?

Answer: Stephen Gaetz, a professor at York University's faculty of education and a researcher on homelessness, says Canada is approaching the problem in "a backward way."

"We ticket the homeless. We move them on," he says. "And what it does is push the homeless away from police."

He says co-ordinated efforts by provincial health, justice and community services departments are needed to address the problem of homelessness, with the key aim of providing safe, low-income housing.

Advocates have long been pushing for an approach known as "Housing First," where the homeless are offered some choice in having their own place to stay, along with access to support services.

In the past, the homeless have had to earn their way into better housing, from shelters through to affordable housing units, by first accepting support and treatment.

Question: For people who are facing mental illness, what helps?

Answer: Ian Burton, a 30-year-old who says he was attacked while homeless in Halifax, says often the key first step is improved emergency medical treatment, where emergency room personnel recognize a mental health issue in a homeless person and assist the patient to seek longer term treatments.

"That would be the first step out, and you can look at housing arrangements after that," he said.

Answer: Barb Perry, who lectures on the topic of hate crime at the University of Ontario Institute of Technology, said existing Canadian law allows judges to consider if a crime is committed with hateful intent. If so, they can impose a more serious penalty.

However, she said the law is seldom invoked and there isn't broad awareness of it among courts or prosecutors.

Like Gaetz, she said she's doubtful increasing prosecutions in this area would do more than send a symbolic message.

"Help people find a place to live," she says.