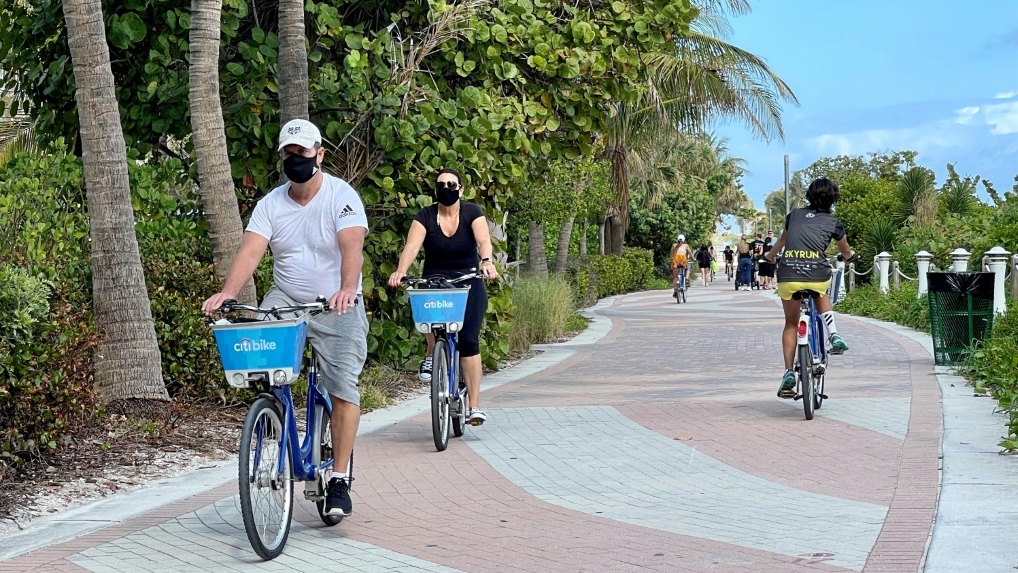 MONTREAL, CANADA -- Birds of a feather normally flock together, but the pandemic has divided Canada's "snowbird" warm weather migrants into two camps: those staying home this winter and those heading to Florida no matter the cost.

Nearly a million Canadians make the annual pilgrimage, fleeing to the southern United States to pass what would otherwise be gray and snowy months with their toes tucked in the sand and ocean breeze in their hair.

The coronavirus has led a majority to forgo the trip this year -- but for those flouting Canada's repeated calls to stay put, the price tag on winter at the beach has skyrocketed.

With the land border between the U.S. and Canada closed for non-essential travel since March, Canada has implored its citizens to stay home.

"Now is not the right time for a vacation abroad," Prime Minister Justin Trudeau said on Wednesday, as the country's second coronavirus wave surges with no sign of slowing.

About 900,000 Canadians spend a large portion of the winter in Florida and in other southern U.S. states, Johanne Blain, director of the Canadian Snowbird Association for the French-speaking province pf Quebec, told AFP.

She estimates that only 30 per cent of that number are doing so this year, however.

That said, rules on the U.S. side are fairly welcoming to sun-starved northerners: The country is allowing in Canadians who fly even for non-essential travel. Canada, on the other hand, is not admitting Americans under the same circumstances.

And while Canadians do not have to respect quarantine rules in Florida, they must do so for 14 days upon return home.

Those who want to make the trip by car or motorhome, meanwhile, simply take advantage of a legal loophole to circumvent the closed land border.

His clients board a plane in the Montreal suburbs and arrive 12 minutes later in Plattsburgh, New York, where a KMC employee meets them with their vehicle, transported across the border.

The experience does not come cheap: Each plane ticket costs C$500 (around $390) and hauling the vehicle 55 miles (90 kilometers) across the border sets customers back $1,000.

Around 2,000 people have so far used the service, according to Couturier.

"All we want... is to have peace of mind and be surrounded by joy, not gloom," a "snowbird" who had recently arrived in Florida with her husband, told AFP.

"We can't take it anymore, we just want to live our life, we are 60 years old, we decided to live in a motorhome," she said, requesting that her name not be used.

Whether or not to head south is "a bit of a heartbreaking decision" for those who spend all year in motorhomes, Blain said.

Such snowbirds generally do not have a permanent home and migrate seasonally between Canada and Florida, often for many years, she said.

Snowbirds are also paying top dollar to have companies like KMC transport their vehicle all the way to Florida for an average price of C$1,500-1,800 -- but it can cost up to $4,500.

"Thanks to the snowbirds, we had to hire more personnel to meet the demand," Couturier said. "It's a very good situation for us right now."

More than 3.6 million Canadians officially visited Florida last year, or one in 10 people.

Blain said she and her husband will not be among those visiting this winter and did not want to run the risk of catching the coronavirus.

Florida has reported more than twice as many cases as Canada -- around 1.2 million -- despite having a population that is only a little over half the size.

"When you are sick, you are vulnerable, and on top of that not even in our own country, even if we do have functioning health insurance," she said.

"We're better off close to family, because you never know what can happen," she said.

Is it a good idea to mix and match COVID-19 vaccines? Experts aren't so sure

U.S. may cut some Moderna vaccine doses in half to speed rollout, official says

As students finish up the holiday break, not everyone is heading back to class

Scotland to enter another lockdown, likely until spring: report