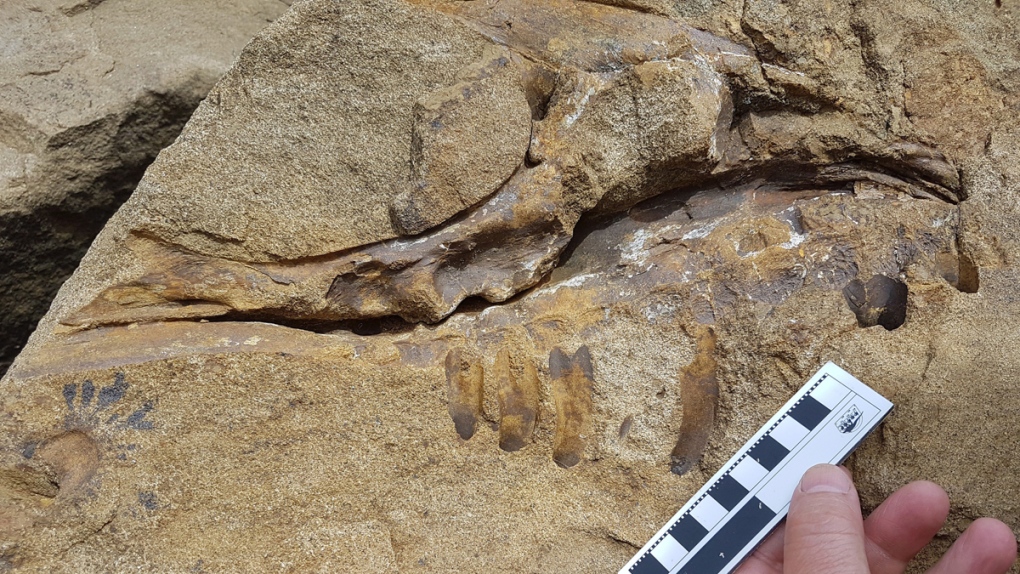 A fossil of a dinosaur skull is shown in this June 12, 2017 handout photo. (Richard McCrea / THE CANADIAN PRESS)

TUMBLER RIDGE, B.C. -- A piece of dinosaur skull unearthed in northeastern British Columbia earlier this month is the first of its kind discovered in the province, an expert says.

The fossilized tyrannosaur skull was found near Tumbler Ridge, in an area that has produced hundreds of dinosaur teeth, bones and footprints since 2001, but until this month had never yielded a skull.

Richard McCrea, director of the Peace Region Palaeaontology Research Centre, said the discovery means B.C. now has "some bones in the game" when it comes to researching the types, age and geographic range of dinosaurs -- information that until now mostly originates from Alberta.

"We're in a frontier in British Columbia because there's been no research in this area," he said. "This is quite a jump for us."

Vancouver Island resident Rick Lambert spotted the skull while hiking through the area about 600 kilometres west of Edmonton.

A chiropractor who had once studied and worked in geology, Lambert has found hundreds of fossils including lobsters and crabs, but said discovering a dinosaur skull was a surprise.

"I never expected to find something like that. It's not anything I actually kept my eye out for," he said, adding that he was equally surprised to learn a skull had never been found in the region before.

"I thought at least they'd have four or five of those in a drawer somewhere," Lambert said.

The 100 kilogram fossil -- including the surrounding rock -- features a boomerang-shaped bone from the upper jaw between the eye and nose of the dinosaur, with teeth projecting down.

McCrea said finding this specific piece of bone is significant because it can be used to determine the type of tyrannosaur it originated from.

Tyrannosaur is a grouping of dinosaurs that include the Albertosaurus and Gorgosaurus. McCrea said fossils of these dinosaurs date back about 74 or 75 million years.

The fossil is about 30 to 40 centimetres in length and about 25 centimetres tall at the highest point. McCrea said the full skull was likely close to metre long.

The bodies of tyrannosaurs matched their large skulls. McCrea said a tall person would struggle to reach the top of their back hip, with some having a hip height of over two metres, and could be eight to 10 metres in length.

Determining the type of tyrannosaur may take some time and involve comparing the fossil to others found in Alberta.

Efforts are now underway to find more fossils connected to the skull, but the endeavour is not as simple as returning to the trail where it was found.

McCrea said the rock slab was actually moved to the area about 14 years ago, likely after being extracted from a quarry in the region.

"That actually gave us a little bit of a puzzle at first ... because we have no record of large meat-eating dinosaurs from this area," he said.

He said there are a few leads on the source of the rock and once that's confirmed, he plans to take a look at the area.

Odds of finding the remainder of the skull are slim but confirming the original location would still provide valuable information about the geological context and even uncover other fossils.

"You don't get anything at all if you don't look and dig," he said.