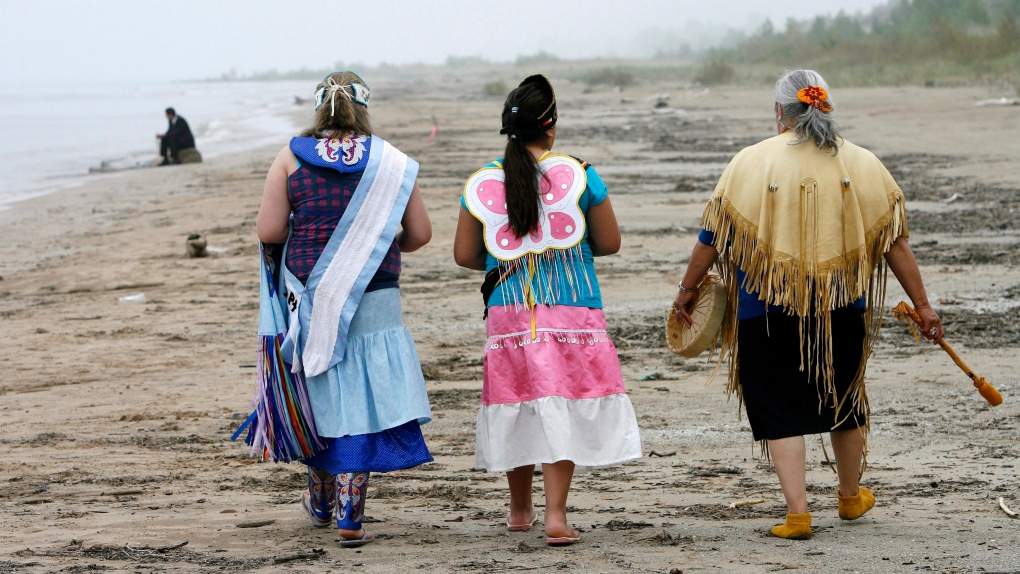 Three women walk on Ipperwash beach near Forest, Ont. in this file photo from 2009. (THE CANADIAN PRESS/Dave Chidley)

A bitter and bloody land dispute between Ottawa and a southwestern Ontario First Nation that culminated in the police killing of an aboriginal protester two decades ago has formally come to an end.

The federal government and the Chippewas of Kettle and Stony Point First Nation signed an agreement Thursday to return Camp Ipperwash, a former military base built on land appropriated in 1942, to the First Nation.

The agreement also gives the First Nation $95 million "to invest in a brighter future."

"This is the day the community will finally realize the land is being returned," said Chief Thomas Bressette. "Today, WWII is finally over for the Chippewas of Kettle and Stony Point with the closure of the taking of our lands in 1942. We look forward to a better relationship with Canada going forward, and today marks a new beginning."

The First Nation - located along the shores of Lake Huron, 35 kilometres northeast of Sarnia, Ont. - says it plans to use the settlement funds to invest in compensation for members, community infrastructure, economic development and community healing and renewal.

Indigenous and Northern Affairs Minister Carolyn Bennett, who was among those who signed the agreement, called it a "landmark settlement"

"Today we are closing a dark chapter of our shared history," she said. "But we are also celebrating a new beginning for the First Nation on its journey toward healing and reconciliation within its community and with Canada."

The Chippewas of Kettle and Stony Point First Nation had sought the return of the Camp Ipperwash lands since the end of the Second World War.

In 1993, some members of the First Nation began an occupation of the property and in September of 1995, protester Dudley George was shot and killed by a police officer after a splinter group of about 30 protesters occupied nearby Ipperwash Provincial Park, claiming it contained a sacred burial ground.

The officer was later convicted of criminal negligence causing death and an inquiry found the government of Ontario, Ottawa and the Ontario Provincial Police all bore responsibility for the events that led to George's death.

In his final report in 2007, Ipperwash inquiry commissioner Sidney Linden called for the disputed land to be returned immediately to the Stony Point First Nation, along with compensation.

The settlement that was formally signed Thursday specifies that work will be done to ensure the land which was used by the military for 50 years - the military withdrew from the base in July 1995 - is safe and environmentally sound.

That process is to include clearing the land of unexploded military devices such as bombs or grenades and the preservation of the sensitive local environment and sacred cultural sites.

"Many here worried they wouldn't live to see the return of Stony Point, stolen by Canada 80 years ago," Bryant said. "Chief Tom Bressette and council courageously said 'no' to an unjust federal settlement offer almost 20 years ago, which turned out to be a small fraction of the final settlement celebrated today. All First Nations will benefit from this precedent."