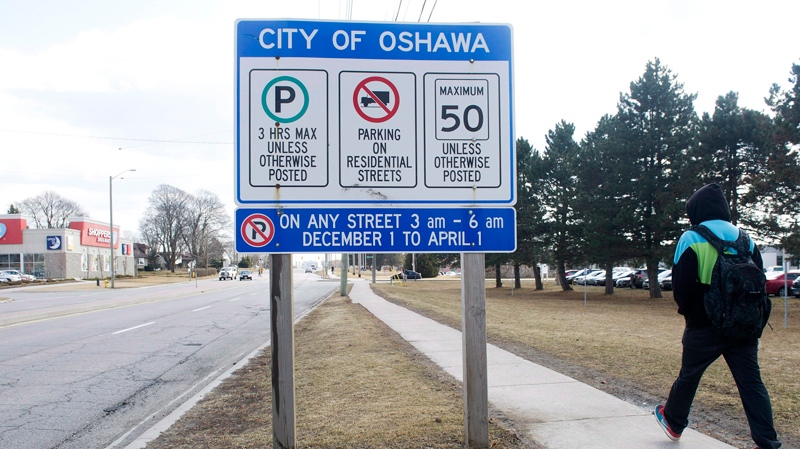 A student walks to the University of Ontario Institute of Technology in Oshawa, Ont., on Tuesday, March 13, 2012. With the latest census figures highlighting the city as a metropolitan area with population growth exceeding the national average - one of just four such areas in recession-weary Ontario - Oshawa is a bright spot in a province being somewhat eclipsed by the success of the West. (THE CANADIAN PRESS / Nathan Denette)

TORONTO -- Two years after graduating from college with an accounting degree, Amanda Coombes expected to be working full-time in her field. Instead, she's living with her mom and working at McDonald's.

These days, in hard-hit Ontario, a job is a job.

"It's hard for us," Coombes, 23, said of the challenges she and her fellow graduates face in their search for work in their chosen field. Older applicants, some laid off after 25 years in the business, offer life and work experience that make them formidable rivals.

"We're competing with people who have been trying to find work and have three times the amount of experience as we do."

Coombes is among the casualties of Ontario's precipitous decline from the country's economic engine to its most populous have-not province.

National Household Survey data released Wednesday by Statistics Canada shows that Ontario had two of the three urban centres with the lowest share of employment income as a percentage of total income -- Peterborough and St. Catharines, at 67 per cent and 66.6 per cent, respectively.

StatsCan has already reported that the unemployment rate for 15- to 24-year-olds has reached 16.4 per cent, compared to Ontario's overall rate of 7.5 per cent.

It's hardest for young people in high school, who have to compete with older workers -- particularly for retail jobs, said Derek Burleton, deputy chief economist at TD Bank.

Although Ontario has fared better than expected since the economic downturn, some of its growth can be attributed to temporary factors that may not be there in the long run, Burleton said.

The province's once-thriving manufacturing sector has been in relative decline for a decade, but it's been masked over the last five years by a strong housing market and low interest rates, which account for a lot of the province's growth, he said.

"So this is where I think to some extent you could argue that the challenges are just beginning for the Ontario economy," Burleton said.

Youth unemployment in particular has raised fears among the governing Liberals that young people will move out of the province to find jobs.

They've promised to make it a top priority, recently announcing a $195-million program that would pay employers to train and hire young people, as well as help youth pay for costs like tools and transportation.

"There's a lot of young people who have a lot of talent and they just haven't had the opportunity to grow," said Finance Minister Charles Sousa.

"And we want them to be able ... to do some of those initiatives right here in Ontario as opposed to finding themselves having to go outside Canada to do those things."

Eisha Alfred, a 21-year-old aspiring physiotherapist, has just started looking for a job after finishing her college education in fitness and lifestyle management in June.

She needs money to pay back student loans, but she's hoping to avoid a McJob by taking a pre-employment program at Springboard, a non-profit organization, that could connect her to the right employers.

"What I'm trying to do is not just do any monotonous, random job -- which I could do because money is money," said Alfred, who lives in Toronto's east end.

"But what I'm trying to do is get into a facility or clinic ... so that I could be exposed to it. I'm trying to find someone that's willing to be somewhat of a mentor. It's just experience as well."

Other young people are creating their own jobs by starting businesses straight out of university. Some 2.6 million Canadians, nearly 10 per cent, reported earning some form of self-employment income in 2010, the NHS numbers released Wednesday show.

Amir Manbachi, a third-year PhD candidate in biomedical engineering, recently founded a company with his advisers at the University of Toronto.

Spinesonics Medical Inc. is developing a sensor that allows surgeons to get a better picture as they're inserting screws into vertebrae. They've received a $50,000 provincial grant to help them commercialize the device.

Manbachi, 28, said he wanted to start his own business because he didn't see many opportunities in the job market. But companies don't have many options either, he added.

"I think the reason is obvious: we're living in one of the most unpredictable and rapidly changing times than ever before. So no one knows what's going to happen."

There's reason for optimism when it comes to Ontario's economic future, economists say.

Ontario can sell goods to a growing United States and foreign markets, as well as attract investment by European companies who want access to the U.S. market, said Burleton. It offers a competitive tax rate for businesses and is the centre of Canada's financial services sector.

But as power and wealth move westward, it's unlikely Ontario will climb to the top once again.

"Even if it were to recover fully and be the growing at the pace that we saw in better days, I don't think Ontario can match Alberta's growth," said RBC economist Robert Hogue, who analyzes housing markets and provincial economies.

"Ontario doesn't have the same catalyst for growth as Alberta had."