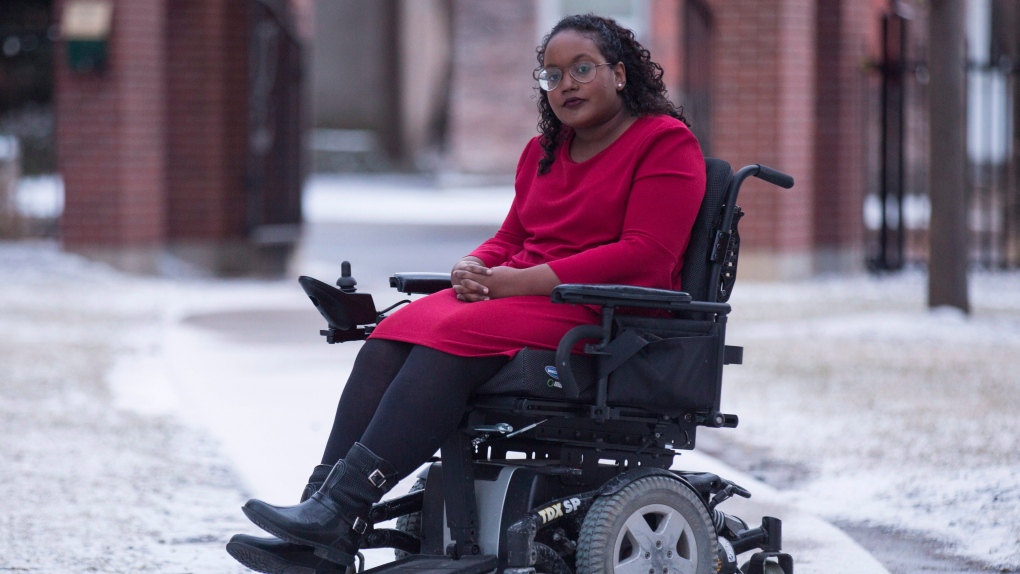 Sarah Jama, 23, a disability justice advocate who has cerebral palsy, poses for a portrait at her home in Hamilton, Ont., on Tuesday, March 13, 2018. THE CANADIAN PRESS/Peter Power

Disabled Canadians are about twice as likely to experience violence as their able-bodied peers, with greater instances of victimization taking place at every stage of life, new data from Statistics Canada indicated Thursday.

The numbers, drawn heavily from the agency's 2014 General Social Survey on victimization, take an in-depth look at the experiences of Canadians over the age of 15 who identify as having a physical, sensory, cognitive or mental health disability and do not live in an institution.

The report, while breaking down data on both genders, offers a particular focus on women, who experience noticeably higher rates of victimization in many areas.

While the report explores factors such as homelessness, sexual orientation and exposure to childhood abuse that exacerbate the likelihood of being victimized, report author Adam Cotter said the data clearly demonstrates that merely being disabled is enough to elevate a person's risk of harm.

"The experience of having a disability itself (is) contributing to those higher rates," Cotter told The Canadian Press in an interview.

Those rates, which reflect the self-reported experiences of disabled people in the 12 months before the survey was conducted, drastically surpass numbers seen in the general population.

While StatCan found the rate of violent victimization of women in the able-bodied population totalled 65 per 1,000 people, the figure for disabled women more than doubled to 137 per 1,000. Numbers for men came in at 58 and 105 per 1,000 respectively.

The numbers doubled again for people whose disability was cognitive in nature or involved mental health, making them four times as likely to have experienced violence as the general population.

Four in 10 self-reported instances of robbery, physical or sexual assault involved a victim with a disability, the report said. The number was higher for disabled women, who comprised 45 per cent of such victims.

Risk of violence decreased with age, but disabled people remained at higher risk from childhood through to old age, the numbers found.

As in the general population, nearly 90 per cent of disabled sexual assault victims were women. But while 29 in 1,000 women overall reported surviving a sexual assault, the number jumped to 56 per 1,000 for disabled women. Women with a cognitive or mental health condition were at greater risk, StatCan said, identifying their rates of victimization at 121 and 131 per 1,000 respectively.

Cotter said widespread misconceptions about the sexuality of disabled women contribute to the higher instances of violence they faced.

The 23-year-old Hamilton resident, who has cerebral palsy and uses a wheelchair, said she was waiting for a bus when she was approached by two men who began asking her personal questions. Jama alleged one man grabbed her and reacted incredulously when she resisted, telling her "well, it's not like you're going to get some anywhere else."

Jama said she deals with other less overt forms of violence regularly.

"People often make decisions about how they interact with me because of how I look," she said. "I'm seen as vulnerable, and there's this idea that people with disabilities are incompetent and can't make their own decisions."

While most of the population can find sanctuary from violence in their own homes, the StatCan data suggests that is less likely for the disabled. One in three instances of victimization took place in a disabled person's home, the data found, adding the figure was double that recorded for the general population.

The numbers, advocates said, paint a picture that has been clear to community members for years -- disabled people, particularly women, experience more harm and inadequate protection from society.

Bonnie Brayton, national executive director of the Disabled Women's Network (DAWN) Canada ,said disabled women have been overlooked for years, noting that the numbers should be a wakeup call.

Federal Minister for Persons with Disabilities Kirsty Duncan thanked StatCan for the research, saying Ottawa is committed to safeguarding the rights of disabled Canadians.

"Our government recognizes that people with disabilities are more at risk of experiencing violence," she said. "These numbers are alarming and we are working to rectify the situation."

Brayton said the latest figures likely underestimate the scope of the problem, since they omit people living in institutions and rely on evidence from people who disclose that they have a disability.