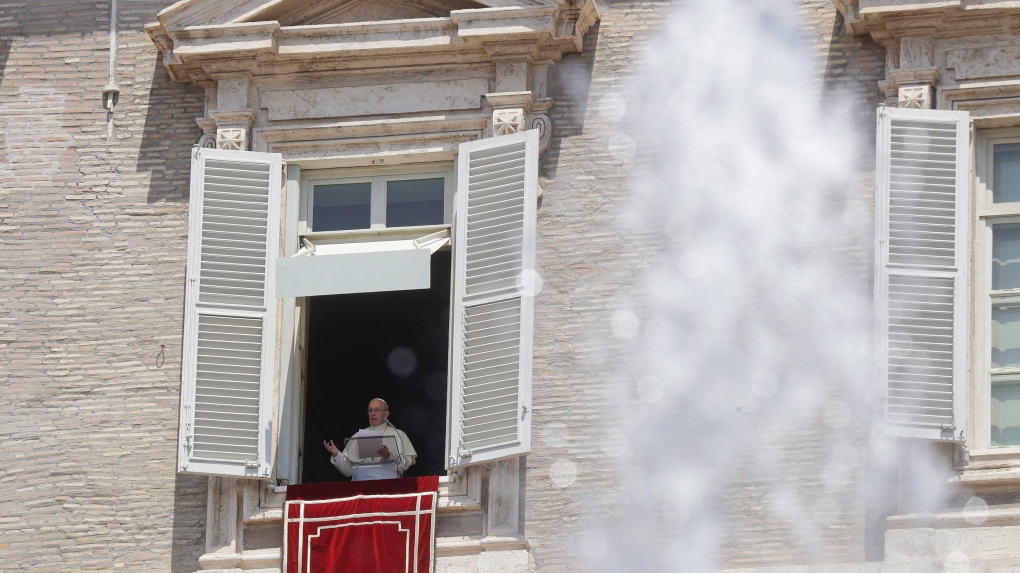 Pope Francis delivers his message from the Apostolic palace during the Angelus noon prayer in St. Peter's Square at the Vatican, Sunday, July 15, 2018. (AP Photo/Gregorio Borgia)

TORONTO -- Rose Marie Fowler was in her 40s when she decided to live a life in the service of God, becoming what the Catholic Church calls a consecrated virgin.

It was a deeply personal decision reached after years of contemplation, she says.

Now 81, having kept her vow consistently, the Edmonton resident is welcoming a directive from the Vatican that states physical virginity is not a prerequisite to taking on the vocation.

"(The Pope) basically said that physical integrity is not the only thing to be considered, and I really thought it was well put by him," said Fowler, calling the guidance from the Vatican a "wonderful instruction."

In a document released this month, the Vatican said a woman who wishes to become a consecrated virgin does not need to have "kept her body in perfect continence," indicating she does not need to physically be a virgin.

The consecration of a virgin is one of the oldest sacraments in the church. In order to become spouses of God and dedicate their lives to the church, Christian women who become consecrated virgins can't have been married before.

Women go through "the rite of consecration," which involves a mass and an expression of their intention to dedicate themselves to God. Unlike nuns, consecrated virgins do not wear special robes or live secluded from the secular world.

The Vatican's directive has been criticized by some consecrated virgins.

The U.S. Association of Consecrated Virgins called the Vatican's directive "deeply disappointing in its denial of integral virginity as the essential and natural foundation of the vocation to consecrated virginity."

Fowler said she was disappointed by that reaction.

"It is not about whether you agree with it or not," she said. "It is about respecting what the Pope had to say, and as far as I am concerned, it is a good interpretation."

Mary Bastedo, who said she has been a consecrated virgin for more than 20 years, also lauded the Vatican for its guidance.

"I welcome the clarification about physical virginity, because this vocation is not about purity, it's about wholeheartedness," said the 67-year-old. "The intentionality is to live a life of virginity, that means it is a life that is given to the Lord."

Bastedo said that years ago, she felt she had a calling to live a life of celibacy as a "fruitful way of being given to God."

In 1989, her bishop spoke to her about the Rite of Consecration to a Life of Virginity, she said. After praying and reflecting about it for a year, Bastedo said she eventually made a decision. In March 1990, she was consecrated.

"It really is a joyful vocation," said Bastedo, who lives in Toronto where she said about 10 women are living as consecrated virgins.

Bastedo said the document from the Vatican is an interpretation many like her have been waiting for.

"It is not a change," said Bastedo. "It is a clarification."