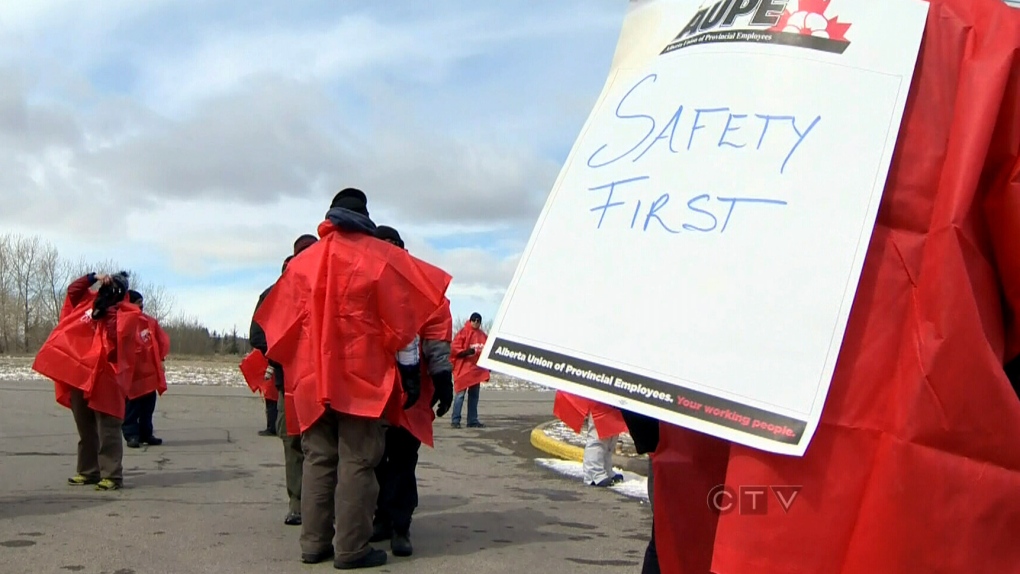 Corrections officers continue their protest outside of the Calgary Correctional Centre, Tuesday, April 30, 2013.

Guards at Alberta correctional facilities are ending their illegal job action and will return to work Wednesday.

The Alberta Union of Public Employees said late Tuesday that an agreement had been reached with the provincial government.

The strike started last Friday at the Edmonton Remand Centre.

According to the province’s deputy solicitor general, Tim Grant, 42 jail guards in several facilities across the province had returned to work.

Remand centre staff were the first to walk off the job Friday after a union member was suspended for complaining about safety issues at the newly-built facility.

On Monday, court sheriffs, social workers and clerks in Edmonton, Calgary, Lethbridge and other communities walked off the job in a show of solidarity with the striking guards.

All court services employees were back at work, Grant said.

Earlier Tuesday, a Court of Queen's Bench justice raised the fine levied on the Alberta Union of Public Employees from $100,000 to $350,000.

Following hours of arguments from the AUPE and the province on Monday, the justice found the union in contempt of court for defying the back-to-work order.

The Alberta Labour Board issued a back-to-work order on Saturday, declaring the strike illegal.

However, a number of guards opted to ignore the order.

The labour strife began late last week, when guards at the Edmonton Remand Centre walked off the job.

Striking guards have said the open-concept design of the $580-million jail poses serious risks to both staff and inmates.

The AUPE claims it had found five pages worth of design flaws after touring the sprawling facility, which will eventually hold up to 2,000 inmates.

The union has also said it was not satisfied with some of the new procedures implemented at the mega-jail.

News of the walkout quickly spread to other Alberta correction facilities, with workers joining in the wildcat strike.

With files from The Canadian Press and CTV Calgary