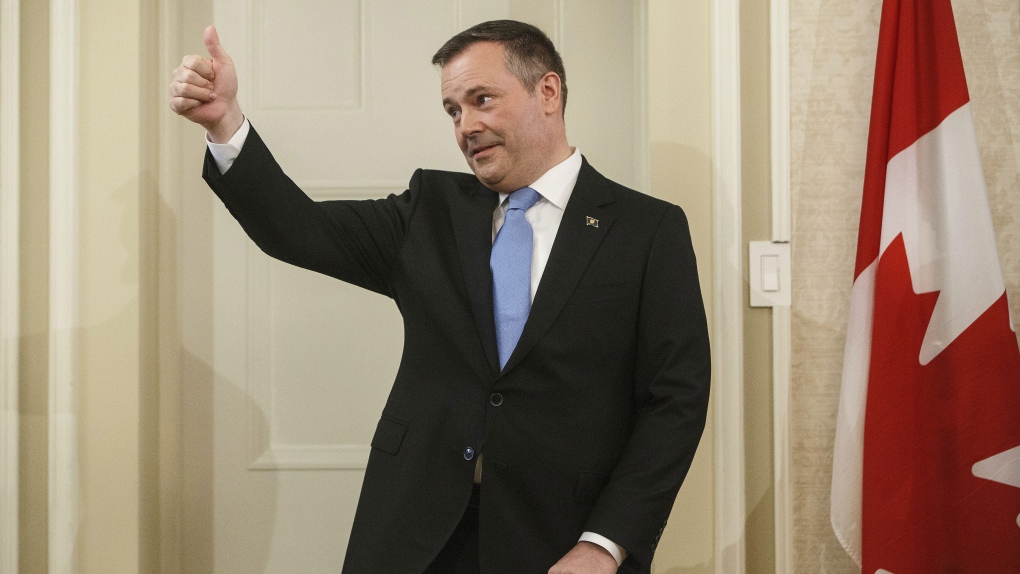 Jason Kenney gives a thumbs up as he is sworn in as premier of Alberta in Edmonton on Tuesday, April 30, 2019. THE CANADIAN PRESS/Jason Franson

"The war room makes for good theatre, but the people who follow this closely are going to look at this as amateur hour," said Keith Stewart of Greenpeace.

"Chasing environmentalists might play well politically, but it's not actually relevant to the discussion that Alberta and Canada need to be having," added Simon Dyer of the clean-energy think tank Pembina Institute.

Both groups have been singled out by Kenney as examples of ones distorting the truth about the impact of the oilsands. The premier has said government staff will be tasked with responding quickly to what he calls myths and lies.

Kenney has also promised to fund lawsuits against offending environmentalists and to call a public inquiry into the role of money from U.S. foundations.

"Stay tuned," Energy Minister Sonya Savage said Tuesday. "We'll have something to talk about next week."

Environmental groups have already been discussing informally what the United Conservative government might have in mind and how they should react.

"We've been contacted," said Devon Page of Ecojustice, an environmental law firm. "We've been saying to the groups, 'We're here. We'll respond and represent you as we have in the past.'

"What we're trying hard not to do is to do what I think the Kenney government wants, which is to get distracted."

Dyer and Stewart said their groups are about 85 per cent funded by Canadians. The Pembina Institute was founded in Drayton Valley, Alta., and its headquarters remain in Calgary.

Both called the war room political posturing aimed at the party's base.

"A lot of the rhetoric around our work and our contribution to Alberta has been based on complete misinformation," said Dyer, who pointed out Pembina has worked with virtually every major energy company in the province.

Stewart called the threats a rerun of the 2012 campaign against environmental groups fuelled by the right-wing The Rebel media group and led by Stephen Harper's federal Conservatives.

"We learned to play rope-a-dope," said Stewart. "Stephen Harper was our best recruiter.

Each group is confident in the accuracy of the facts it cites. Dyer said Pembina research has been used by investors, academics and governments.

Stewart said the issue isn't facts, but how they are understood.

"Often what it is is a disagreement over which fact is important. Industry will say, 'We're reducing emissions per barrel.' We'll say, 'Emissions are going up.' Both statements are true and it depends which you think is more important."

Cara Zwibel of the Canadian Civil Liberties Association said the Kenney government must tread carefully. It's OK to defend your position, but not to threaten, she said.

"If we're talking about initiating lawsuits against individuals or organizations on the basis of speaking out on issues of public importance, then that raises serious problems," she said. "Then we have a much more obvious impact and potential violation on freedom of expression."

The province could possibly expose itself to legal action if its statements harm a group or individual -- say, by putting them at the centre of a Twitter firestorm, said an Edmonton lawyer.

"There's certainly some kind of moral responsibility in terms of understanding that kind of highly charged rhetoric," said Sean Ward, who practises media law. "You have to understand the consequences that are likely to follow."

Ward said any cases the government funds would also be tough to win.

"There are a lot of available defences. It's difficult to see that this sort of general debate they're going to be able to shut down with defamation law."

Environmentalists say their response will be to avoid distraction and carry on.

"The vast majority active in this place don't want to go back to a high conflict, polarizing environment," Dyer said. "We're not interested in polarizing this debate."