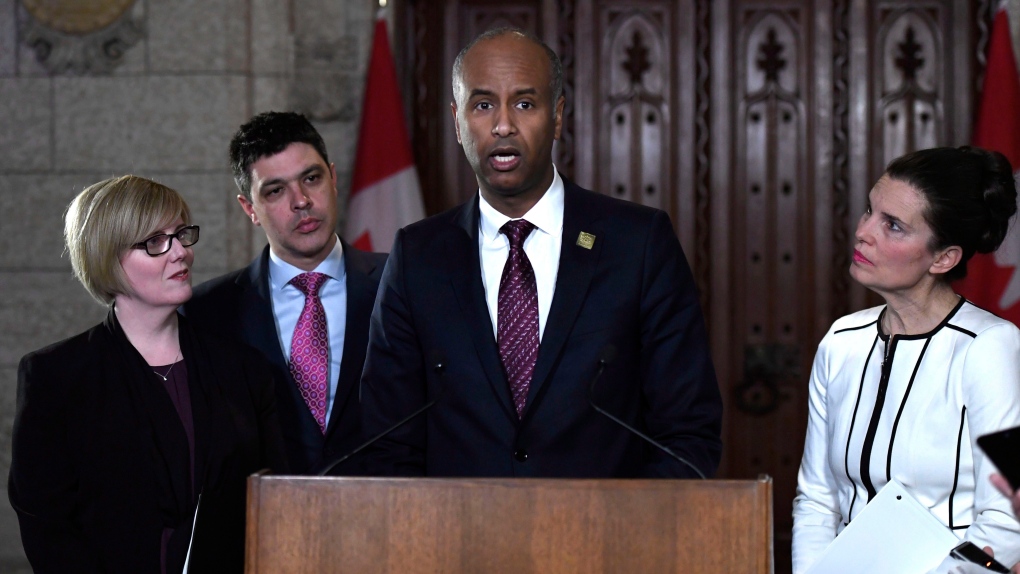 Minister of Immigration, Refugees and Citizenship Ahmed Hussen makes an announcement on medical inadmissibility in Ottawa on Monday, April 16, 2018. (THE CANADIAN PRESS/Justin Tang)

OTTAWA -- After four decades, the federal government is getting rid of rules that turned away would-be immigrants with intellectual or physical disabilities, Immigration Minister Ahmed Hussen said Monday.

The government will no longer be allowed to reject permanent resident applications from those with serious health conditions or disabilities.

Most of those impacted by the policy have been economic immigrants already working and creating jobs in Canada, but whose children or spouses may have a disability, Hussen said.

"The current provisions on medical inadmissibility are over 40 years old and are clearly not in line with Canadian values or our government's vision of inclusion."

He cited the case of a tenured professor at York University who was denied permanent residence because his son had Down syndrome and another case of a family that came to Canada and started a business, but were rejected because of a child with epilepsy.

"These newcomers can contribute and are not a burden to Canada," the minister said. "These newcomers have the ability to help grow our economy and enrich our social fabric."

The changes will amend the definition of social services by removing references to special education, social and vocational rehabilitation services and personal support services.

Ottawa is also tripling the cost threshold at which an application for permanent residency can be denied on medical grounds.

This will allow immigrants with minor health conditions that have relatively low health and social services costs to be approved for permanent residency, such as those with hearing or visual impairments.

Of the 177,000 economic immigrants admitted to Canada every year, about 1,000 are affected by the medical inadmissibility policy. The changes are expected to dispense with a majority of these cases.

There have been calls to repeal the policy entirely, including from the House of Commons citizenship and immigration committee, which studied the issue last year.

Liberal MP and committee chair Rob Oliphant said he had hoped government would announce a full repeal. But more work must be done to determine the full cost implications to the provinces, he said.

"We at committee could not get good cost data," Oliphant said.

But Conservative immigration critic Michelle Rempel says she believes the costs could indeed be high. She was critical of government's decision to move ahead with changes before any concrete data has been developed to determine the costs to the provinces and territories.

"My concern is that the federal government is downloading costs to the provinces without a real plan to deal with that and that seems like something they should have done and considered before they made this announcement."

Hussen told reporters Ottawa will pay the costs of the changes announced Monday, but remained unclear about whether this would mean additional money in health or social services transfers.

"We will reflect on these changes to see the impact that they will have. We have to wait and see what the numbers will be before I can answer that question, " Hussen said.

Meanwhile groups that have been advocating for a full repeal of the policy are expressing disappointment over the changes, which they say don't go far enough.

James Hicks, national director of the Canadian Council of Canadians with Disabilities (CCD), called the changes mere "tweaks." His organization wanted a full repeal of the medical inadmissibility provisions.

"While today's announcement should make it easier for some persons with disabilities to come to Canada, it falls far short of legislative reform that we had expected."

Felipe Montoya, the university professor whose case was cited by Hussen, welcomed the changes, but added he feels they fall short of what many advocates and individuals have pushed for:

"We recognize this timid move in the right direction, but will be relentless in calling for what should have been done today and not in some indefinite future -- full elimination of this discriminatory policy."

The changes are expected to come into effect immediately.