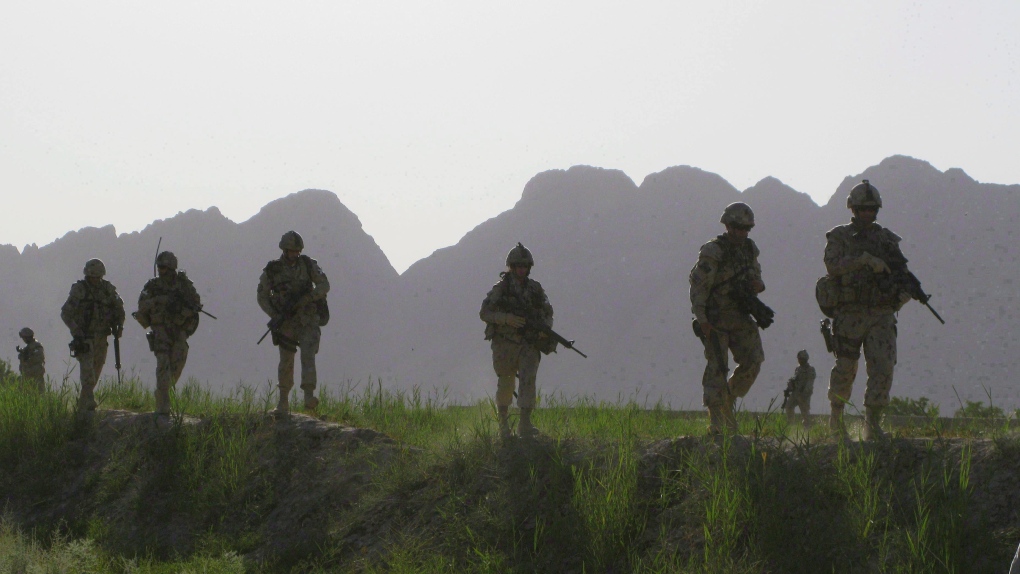 Canadian soldiers patrol an area in the Dand district of southern Afghanistan on Sunday, June 7, 2009. (Colin Perkel / THE CANADIAN PRESS)

VANCOUVER -- A B.C. Supreme Court justice says current and former members of the Canadian Forces who were injured in Afghanistan can continue their class-action lawsuit against the federal government.

The lawsuit was filed last fall, with plaintiffs arguing the new Veterans Charter and the changes it brings to the compensation regime for members of the Canadian Forces violate the constitution and the Charter of Rights and Freedoms.

Lawyers for the Attorney General of Canada asked the court to throw out the case, arguing it had no chance of success and was not the appropriate way for the veterans to express their concerns.

Justice Gordon Weatherill dismissed the federal government's application on Friday, but also threw out three smaller arguments made by the veterans.

"This action is about promises the Canadian government made to men and women injured in service to their country and whether it is obliged to fulfil those promises," he said.

Weatherill struck an argument made by the veterans that they have been unlawfully deprived of their property rights without due process of law and contrary to the United Nations' Universal Declaration of Human Rights.

Weatherill also struck arguments that Parliament had not scrutinized a set of rules known as the Table of Disabilities and Instructions and that the Crown owed the veterans a duty of care consistent with the social covenant.

None of the allegations have been proven in court, and the Attorney General of Canada has yet to file its response to the veterans' lawsuit.

The new Veterans Charter eliminated the lifetime disability pension for disabled soldiers and replaced it with lump-sum payments.

The veterans argue the disability payments for injured soldiers pale in comparison to awards handed out for worker's compensation claims and by civil courts for far lesser injuries in motor vehicle accidents or personal injury.

The lawsuit they filed said each received a pension and other compensation from the Department of Veterans Affairs, including lump sum payments ranging from $41,000 to nearly $261,000.

Campbell is a 32-year veteran of the Canadian Forces who served in Cyprus, Bosnia and Afghanistan.

In June 2008, Campbell, of the Edmonton-based Princess Patricia's Canadian Light Infantry, was struck by an improved explosive device and Taliban ambush.

He lost both legs above the knee, one testicle, suffered numerous lacerations and a ruptured eardrum. He has since been diagnosed with depressive disorder and post-traumatic stress disorder.

Campbell received a lump sum payment for pain and suffering of $260,000. He will receive his military pension, with an earnings loss benefit and a permanent impairment allowance but he is entirely unable to work and will suffer a net earnings loss due to his injuries, the lawsuit claims.

Another plaintiff soldier suffered severe injuries to his leg and foot in the blast that killed Canadian journalist Michelle Lang and four soldiers. He was awarded $200,000 in total payments for pain and suffering and post-traumatic stress.