A difficult potato harvest could bring pricier spuds to the supermarket 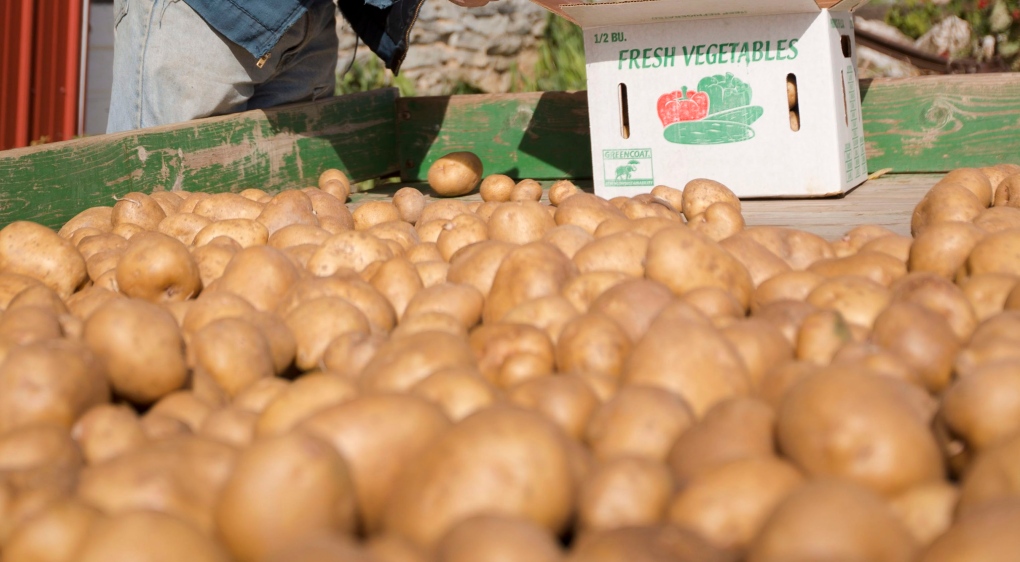 TORONTO -- Canadian potato producers left more crops in the ground this year than in any prior year on record, raising the possibility of price increases for consumers.

Data released Friday by Statistics Canada shows that more than 360,000 acres of potato crops were planted this year – a 3.7 per cent increase over last year – but more than 20,000 of those acres could not be harvested. There has not been a year where more than 20,000 acres went unharvested since StatCan started compiling that data in 1985.

Even though this year's total potato harvest was four per cent higher than last year's and 2.4 per cent above the five-year average, it was well below what the industry had been hoping for, according to the United Potato Growers of Canada.

Alberta's harvest was hampered in part by a late-September snowstorm, while Manitoba faced a slew of weather-related difficulties that began with a dry growing season.

"The rains [that] could have been used earlier in the season started coming in copious amounts just as harvest was beginning, waterlogging soils and bogging down equipment," reads a commentary from the potato growers' group.

"As growers waited for heavier soils to dry out, they were hit by a major blizzard on Oct. 10. After another delay, growers went back after two weeks and dug what they could but had to give up on Oct. 26 as the ground froze for winter."

An estimated 13,000 acres of potato crops were abandoned in Manitoba this year – more than half the national total. It's enough that even though farmers in Manitoba seeded nine per cent more of their fields with potatoes than last year, they harvested fewer potatoes in total.

WHAT IT MEANS FOR CONSUMERS

The problems in Manitoba have been cited as one of the factors sparking fears of a potato or french fry shortage in the U.S.

French fries are particularly at risk because they are made with larger potatoes, while the potatoes that have been harvested in the U.S. have been smaller than normal, according to Bloomberg News.

The American potato sector also experienced one of its worst years on record, with production declining by more than six per cent.

The U.S. potato crop yields about four times as many potatoes as the Canadian one. Filling this year's American production deficit would require about one-quarter of the entire Canadian crop.

Whatever happens between Canada and the U.S., analysts expect the basic law of supply and demand to take over, with prices increasing in response to the reduced harvest – even though Canadian consumers have already been paying more for potatoes this year.

Sylvain Charlebois, director of the Agri-Foods Analytics Lab at Dalhousie University in Halifax, told CTV News Channelon Dec. 2 that potato prices in Canada had already been rising long before fears of a shortage hit the headlines, with potato prices jumping 20 per cent year-over-year and frozen french fry prices increasing by 17 per cent over the same period.

Alberta and Manitoba combine to produce approximately 40 per cent of Canadian potatoes, meaning the difficult seasons there will definitely have an impact on the national picture.

One thing that might help lessen the damage for consumers is a relatively strong season in Prince Edward Island. Canada's smallest province is its biggest producer of potatoes, responsible for nearly 24 per cent of the national crop.

Despite Hurricane Dorian drenching the island in September, P.E.I. producers reported a strong potato harvest, up 2.5 per cent over last year.

Big production jumps were also recorded in Quebec and New Brunswick. Even in Alberta, where production was far below expectations, the harvest was still nearly nine per cent above its usual level because so many more farmers were planting the crop.