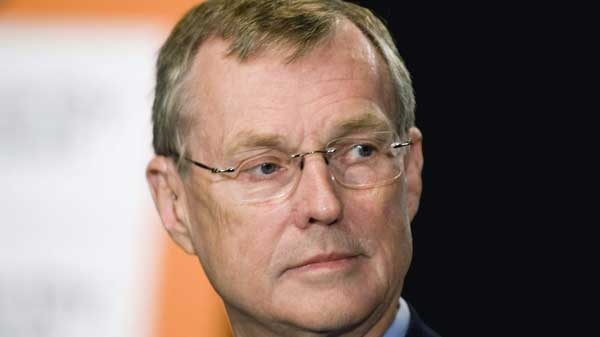 OTTAWA -- TD Bank chief executive Ed Clark says being a champion of social issues is not something rewarded "just in heaven" but also benefits the bank's bottom line.

The bank executive, who gave a key speech at the WorldPride Human Rights Conference in Toronto on Wednesday, said TD awoke to diversity issues about a decade ago and has since become a major advocate for the LGBT (lesbian, gay, bisexual and transgender) community and sponsor of 42 pride festivals across North America.

In an interview before the speech, Clark said he has not tried to calculate whether his bank's public advocacy on the issue has won him more customers than it has lost him, but thinks overall it has been good for TD (TSX:TD).

"I don't know and I don't care, to be honest," he said. "People are trying to build great institutions that will last 100 years, (so if) somebody says, 'Well, I'm going to take my money out if you sponsor pride parades,' you say, 'Take it out."'

Over time, creating an institution that is on the right side of history and creates a welcoming, open culture for people of different sexual orientation and ethnic groups is a positive, Clark added.

"There are rewards not just in heaven, but eventually in the shareholder, if you run an institution that people say, 'I love their employment brand, they create a different atmosphere."'

He noted that TD is among the most profitable financial institutions in the western world in terms of shareholder returns.

Clark said he consciously began trying to make the culture at TD inclusive for all employees when in 1994 he offered same sex benefits to his employees. He was shocked when only 55 signed up, a startlingly low number for an institution with 55,000 employees.

That's when he realized people were afraid to reveal who they were.

"That was a profound, upsetting event for me. I said, 'Wow, it probably also means there are also a lot of other prejudices sitting out there that we're not really dealing with,' and so I made a personal initiative that we are going to change the culture."

He met with some resistance. Clark recalls in his speech that one executive told him the bank was losing customers to rivals because it was so openly supportive of gay issues. He said he told him to go work for a competitor if that's what he felt.

From the original 55 who were willing to identify themselves as gay in 1994, the bank now has 21 operating diversity groups with total membership of 3,000 employees.

Despite recent gains for many minorities, Clark notes that the LGBT community is still vastly over-represented in terms of the number of youth on the street, youth suicides and victims of bullying.

"So we should not as Canadians be smug that yes we have same-sex marriage... we still have a battle here," he said.

Clark said he is currently involved in an effort to establish a crisis centre for LGBT youth because traditional big city shelters tend not to be welcoming of that community.

As well, he announced $100,000 donation to the Rainbow Railroad, a Toronto-based group that helps LGBT victims from foreign countries seek refuge.

A recent online survey for Sodexo Canada, a facility manager for business, hospitals, universities and others, found that nearly all Canadian respondents said workplaces should be inclusive of all employees, regardless of sexual orientation.

The survey found that 89 per cent of the respondents, who were fully employed, felt workplaces should make efforts to welcome all workers, with 72 per cent believing that diversity should be a priority with employers.

Those polled also believed that more could be done to ensure that lesbian, gay, bisexual and transgendered employees feel comfortable and valued in the workplace. Sixty-seven per cent said there was still work to be done to create a more inclusive work environment, with 49 per cent saying their own employers needed to work harder in this area.

Lastly, 84 per cent said having diversity at work could help employers come up with new perspectives when faced with business challenges.

The June 16 Sodexo Workplace Diversity Survey was conducted online by Leger with 1,090 Canadian workers between April 25 to April 30. The polling industry's professional body, the Marketing Research and Intelligence Association, says online surveys cannot be assigned a margin of error as they are not a random sample and therefore are not necessarily representative of the whole population.