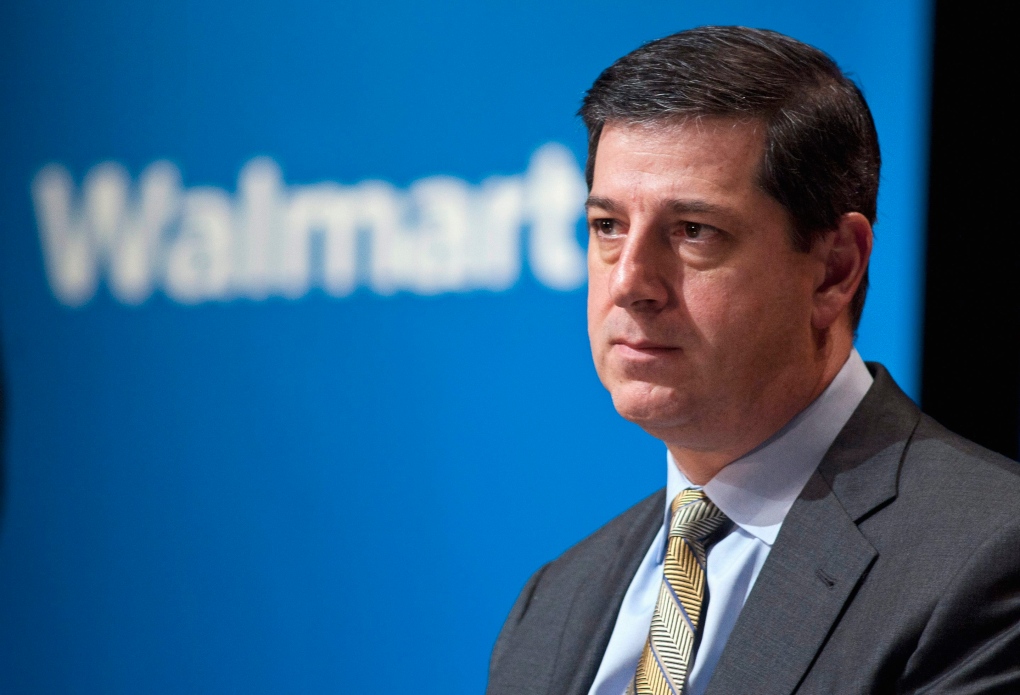 Wal-Mart President and CEO Bill Simon listens to a reporters question during Wal-Mart's announcement of a comprehensive effort to provide healthier and more affordable food choices to their customers, in Washington, Thursday, Jan. 20, 2011. (AP / Cliff Owen)

The plan includes hiring more than 100,000 veterans in the next five years, spending $50 billion to buy more American-made merchandise in the next 10 years and helping its part-time workers move into full-time positions sooner.

The move comes as Walmart's attempts to rebound from blows to its reputation in recent months from an alleged bribery scandal in Mexico and a deadly fire in November at a Bangladesh factory that supplies clothes to the company. Walmart, which often has been criticized for offering low-paying jobs and not buying more from U.S. manufacturers, said its plan will highlight the career opportunities in the retail industry.

"We've developed a national paralysis that's driven by all of us waiting for someone else to do something," Bill Simon, president and CEO of Walmart's U.S. business, said at an annual retail industry convention in New York on Tuesday morning. "The beauty of the private sector is that we don't have to win an election, convince Congress or pass a bill to do what we think is right. We can simply move forward, doing what we know is right."

The company said plans to hire every veteran who wants a job and has been honourably discharged in the first 12 months of active duty. The program, which will start on Memorial Day, will include jobs mostly in Walmart's stores or in its Sam's Club locations. Some will be at its headquarters, based in Bentonville, Arkansas or the company's distribution centres.

Dave Tovar, a Walmart spokesman, says that the company hasn't worked out the details but it will "match up the veterans' experience and qualifications." Simon, who served in the Navy, said that veterans have "a record of performance under pressure."

"They're quick learners, and they're team players. These are leaders with discipline, training, and a passion for service. There is a seriousness and sense of purpose that the military instills, and we need it today more than ever," he said.

Walmart said First Lady Michelle Obama's team has expressed an interest in working with Walmart and with the rest of the business community. In the next several weeks, Simon said the White House will convene the Department of Veterans Affairs, the Department of Defence and major U.S. employers to encourage businesses to make commitments to train and employ American's returning veterans.

The first lady, who spearheaded a White House drive to encourage businesses to hire veterans, praised Walmart's announcement on Tuesday, calling it "historic."

"We all believe that no one who serves our country should have to fight for a job once they return home," The first lady said in the statement. "Walmart is setting a groundbreaking example for the private sector to follow."

In addition to hiring veterans, Walmart said that it will buy spend $50 billion to buy products made in the U.S. over the next 10 years. According to data from Walmart's suppliers, items that are made, sourced or grown in the U.S. account for about two-thirds of the company's spending on products for its U.S. business. The company said it plans to focus on buying more in areas such as sporting goods, fashion basics, storage products, games and paper products.

The commitment comes as economics are changing for making goods overseas. Labor costs are rising in Asia, while oil and transportation costs are high and increasingly uncertain.

Simon, Walmart's CEO, said that a few of the company's manufacturers have told Walmart that they have defined the "tipping points" at which manufacturing abroad will no longer make sense for them. Simon cited one supplier called 1888 Mills, which made most of its towels overseas, but had an underutilized factory in Griffin, Georgia.

Walmart said it worked with the supplier on a couple of innovations and now the U.S. factory is hiring again. The towels made in the U.S. will be in 600 of its stores this spring, and another 600 stores in by the fall. The towels' label will say "Made Here."

The final piece of Walmart's plan is to help part-time workers transition into full-time employment if they desire to. Simon said that about 75 per cent of its store management start as hourly associates, and their average pay is $50,000 to $170,000 a year.

"There are some fundamental misunderstandings out there about retail jobs, and we need to do better at explaining the opportunities we offer," he said.