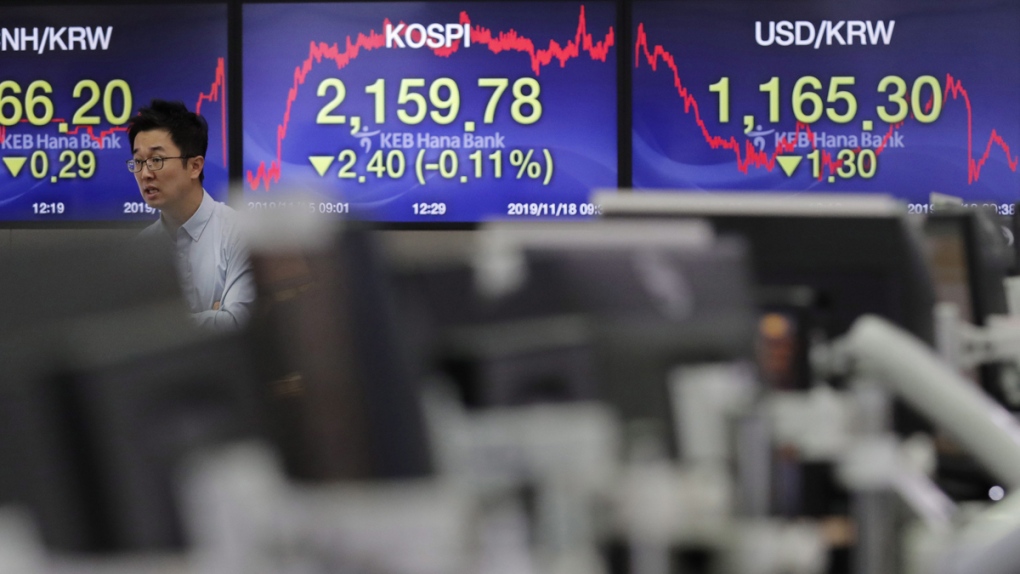 "While we continue to get some trade information related to the latest negotiations with U.S. and China dribbling out, I think overall today the markets are rather directionless because there's not a whole lot of data to swing sentiment one way or another," said Craig Fehr, Canadian markets strategist at Edward Jones.

Even though markets have recently marched to new highs, it has come amid a dramatic decrease in volatility, signifying a "rather cautious rally", he said.

"So even as the Canadian and the U.S. markets have rallied to highs, it's come in an environment where defensives are performing quite well relative to cyclicals, which tells me that there's still a fair bit of caution in this market despite the fact that we've seen a pretty steady rally in the past several weeks," he said in an interview.

Monday's stock movement came as new questions were raised about whether China and the U.S. can reach the first phase of a trade agreement that avoids some of the tougher areas of dispute.

At issue is whether U.S. President Donald Trump will agree to roll back tariffs, and the amount of agricultural purchases by the Chinese. Both sides are trying to avoid taking steps that would be perceived as caving by their backers, said Fehr.

"I think it's a perfect example of just how cloudy the situation continues to be that even what seemingly was the easiest part of the deal is even encountering some setbacks."

The TSX moved lower on a large drop by the health care sector and a substantial decrease by energy as lower crude prices pushed shares of Canadian producers such as Encana Corp. down 4.5 per cent.

Fehr said oil prices dropped because Chinese policymakers are looking for additional ways to try to stimulate credit growth within the domestic economy -- an indication that the world's second-largest economy continues to struggle.

"Any time we see perceived weakness in China's economy, that tends to take its toll on commodities prices and I think that's a little bit of what we're seeing today."

Health care lost 4.4 per cent as several cannabis producers sustained large share losses as the sector continues to face hard times. Aurora Cannabis Inc. shares fell 16.4 per cent while Hexo Corp. was down 10.2 per cent in the first day of trading after it disclosed that a section of a Niagara, Ont., cultivation facility that has since closed was not licensed as required by Health Canada.

Technology was the best performing sector on the day while materials rose on higher gold prices.

Barrick Gold Corp. shares gained 1.9 per cent after the company announced plans to sell its 50 per cent non-operating interest in an Australian gold mine for US$750 million in cash.

The Canadian dollar traded for 75.68 cents US compared with an average of 75.58 cents US on Friday.