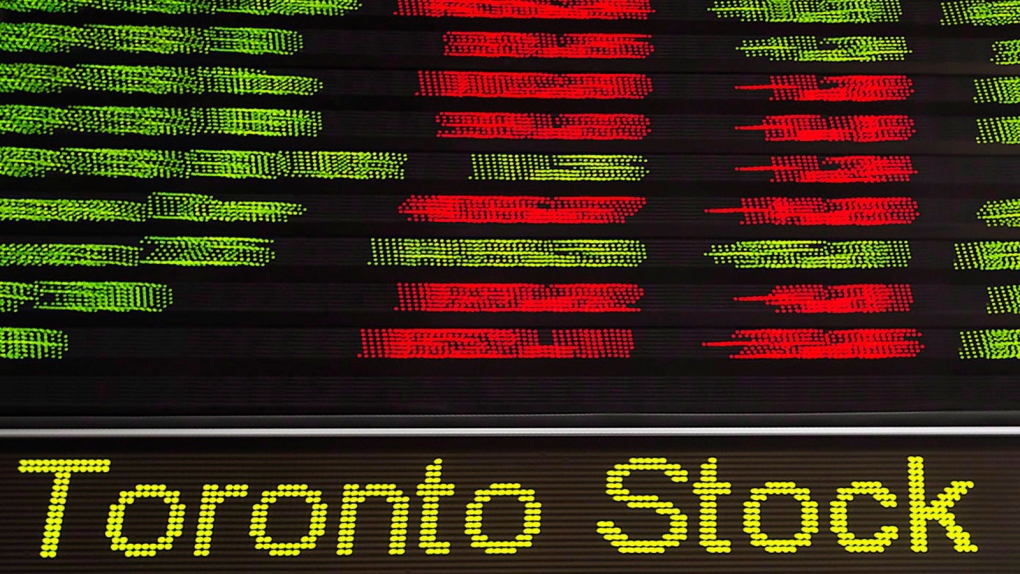 Financial numbers flow on the digital ticker tape at the TMX Group in Toronto's financial district on May 9, 2014. THE CANADIAN PRESS/Darren Calabrese

TORONTO -- Canada's main stock index had its worst day of the year Wednesday as ramped up trade rhetoric stoked fears of an economic slowdown that stood in contrast with the Bank of Canada's more optimistic outlook.

China signalled overnight that it could retaliate against U.S. trade threats by using its dominant position in rare earth minerals to restrict sales used in technology and military equipment.

That unnerved investors who fled equities for the safety of fixed income investments like U.S. treasuries. Bond yields hit a 20-month low and the yield curve inverted for a second time this year, historically a sign of a potential recession.

"The markets today are predominantly trading on trade fears and the worry that this will cast a shadow on the global economy and weigh on the global growth outlook," said Candice Bangsund, portfolio manager for Fiera Capital.

Bangsund said the yield curve inversion is just as much a false signal now as was the previous case before markets recovered to new highs.

"So we think this is another short-term slump within a cyclical market."

The S&P 500 fell below the 2,800-point threshold, considered the floor from a technical perspective.

"There's just a lot of uncertainty and I think that it's likely going to get worse before it gets better," Bangsund said in an interview.

The reaction marked a sharp disconnect from the Bank of Canada's neutral position and optimistic commentary about the economy from earlier in the day, Bangsund said.

"It's a case of sentiment versus fundamentals," she said.

"The markets are overly nervous about the US-China trade backdrop and have largely disregarded the fundamentals backdrop which is actually in fairly healthy shape. The U.S. economy is growing at a healthy and trend-like pace and inflation is hovering around two per cent."

The Canadian dollar traded at an average of 74.00 cents US compared with an average of 74.20 cents US on Tuesday after the Bank of Canada kept its key interest rate on hold at 1.75 per cent. The central bank pointed to "accumulating evidence" of improvements in the economy, but noted that trade risks remain.

Nine of the 11 major sectors on the TSX were down, led by health care and consumer discretionary. It fell more than three per cent on a 31 per cent decrease for Canada Goose shares after the luxury parka retailer reported that its revenue in the latest quarter was the slowest growth in eight quarters.

Financials were down on lower bond yields, reaction to the central bank's interest rate move and the Bank of Montreal's drop in quarterly profits to $1.5 billion.

Crude was down 3.5 per cent earlier in the day but largely recovered following the reopening of a pipeline in Cushing, Okla., that endured outages and disruptions due to flooding from heavy rains.

Materials were also up on a share boost for Turquoise Hill Resources Ltd.