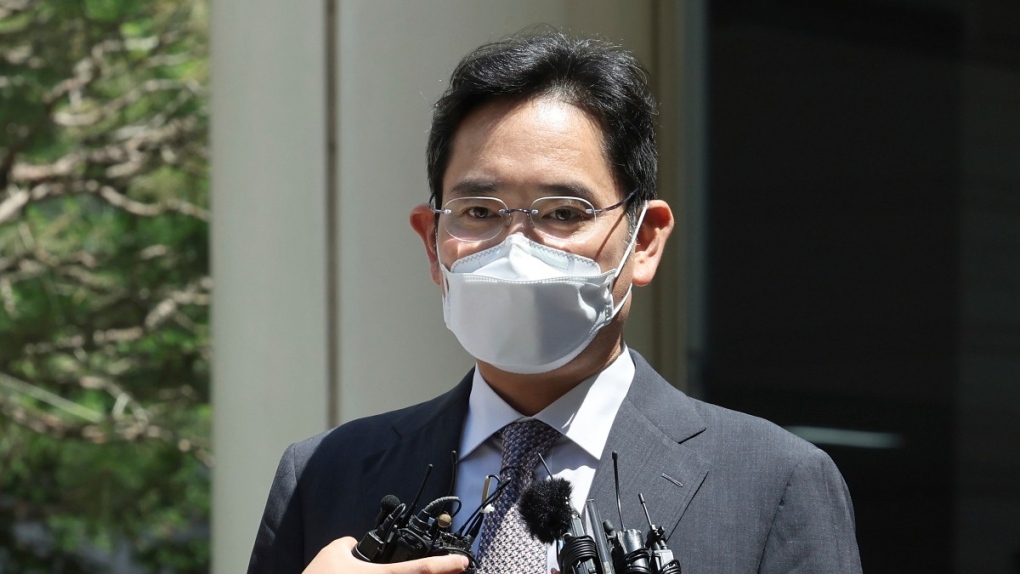 Samsung's de-facto leader secured a pardon Friday of his conviction for bribing a former president in a corruption scandal that toppled a previous South Korean government, an act of leniency that underscored the tech company's huge influence in the nation.

Lee Jae-yong's pardon is partially symbolic since he was released on parole a year ago after serving 18 months of a prison term that would have ended in July, and critics say the billionaire has remained in control of Samsung even while behind bars. Still, the pardon will allow the heir to the electronics juggernaut to fully resume his management duties and could make it easier for the company to pursue investments and mergers.

The Justice Ministry said President Yoon Suk Yeol, who as a prosecutor investigated the corruption scandal involving Lee, will issue the pardon Monday, a national holiday when some 1,700 people are set to receive clemency, including other top business leaders.

Lee, 54, was convicted in 2017 of bribing former President Park Geun-hye and her close confidante to win government support for a merger between two Samsung affiliates that tightened Lee's control over the corporate empire. Park and the confidante were also convicted in the scandal, which enraged South Koreans, who staged massive protests for months demanding an end to the shady ties between business and politics. The demonstrations eventually led to Park's ouster from office.

While some civic groups criticized the decision, recent opinion polls have indicated South Koreans -- years removed from the protests in 2016 and 2017 -- largely favored granting Lee a pardon. That reflects the continuing hold Samsung has in a country where it makes not just smartphones and TVs but also issues credit cards, builds luxury apartment buildings and runs the country's most sought-after hospital.

Business leaders and politicians had also called for Lee's pardon, which they said would allow Samsung, one of the world's largest makers of computer memory chips and smartphones, to be bolder and quicker in business decisions by fully reinstating his rights to run the business empire.

Justice Minister Han Dong-hoon said the pardons of the business tycoons were aimed at "overcoming the economic crisis through encouraging business activity" at a time when South Koreans are grappling with rising prices, high personal debt and a faltering job market.

Lee's detractors say he already fully resumed his management duties once out on parole -- even though South Korea's law bans people convicted of major financial crimes from returning to work for five years following the end of their sentences. Former Justice Minister Park Beom-kye defended Lee's involvement in Samsung's management, insisting that his activities weren't in violation of the ban because the billionaire wasn't receiving wages from Samsung.

In a statement released through Samsung, Lee said he was grateful for "receiving an opportunity to start anew."

"I want to express my apologies for causing concerns for many people because of my shortcomings. I will work even harder to fulfill my responsibilities and duties as a businessperson," Lee said.

Lee still faces a separate trial on charges of stock price manipulation and auditing violations related to the 2015 merger.

Among others set to be pardoned is Lotte Group Chairman Shin Dong-bin, who received a suspended prison term in 2018 on similar charges of bribing Park, whom then-President Moon Jae-in pardoned in December. Chang Sae-joo, chairman of Dongkuk Steel Mill, and former STX Group Chairman Kang Duk-soo will also receive clemency.

A coalition of civic groups, including People's Solidarity for Participatory Democracy, issued a statement criticizing the move to pardon the business leaders, accusing Yoon of cozying up to "chaebol," referring to the family-owned conglomerates that dominate the country's economy.

"President Yoon Suk Yeol's sell-out (to business) sends a signal to chaebol chiefs that they are free to commit all the crimes they want," the groups said, accusing Yoon of damaging the rule of law.

Former President Park was convicted of a broad range of corruption crimes, including colluding with her longtime confidante, Choi Soon-sil, to take millions of dollars in bribes and extortion from Samsung and other major companies while she was in office.

She faced a prison term of more than two decades before Moon pardoned her in December, citing a need to promote unity in the politically divided nation. Choi remains in jail. Chang, of Dongkuk Steel Mill, was released on parole in 2018 with about six months left on a 3 1/2-year prison term on charges that he embezzled millions of dollars in corporate funds and used some of it to gamble in Las Vegas.

South Korea's Supreme Court last year confirmed a suspended prison sentence for Kang, who headed STX from 2003 to 2014, on charges of embezzling corporate funds and other crimes.

A notable exclusion from Yoon's pardons was former President Lee Myung-bak, who in June was granted a temporary release from a 17-year prison term after prosecutors acknowledged his health problems.

Han, the justice minster, said that the government did not consider the pardons of any convicted politicians or government employees this time, saying that the focus was on the economy.

Lee, a CEO-turned-conservative hero before his fall from grace, was convicted of taking bribes from big businesses including Samsung, embezzling funds from a company that he owned, and other corruption-related crimes before and during his presidency from 2008 to 2013.