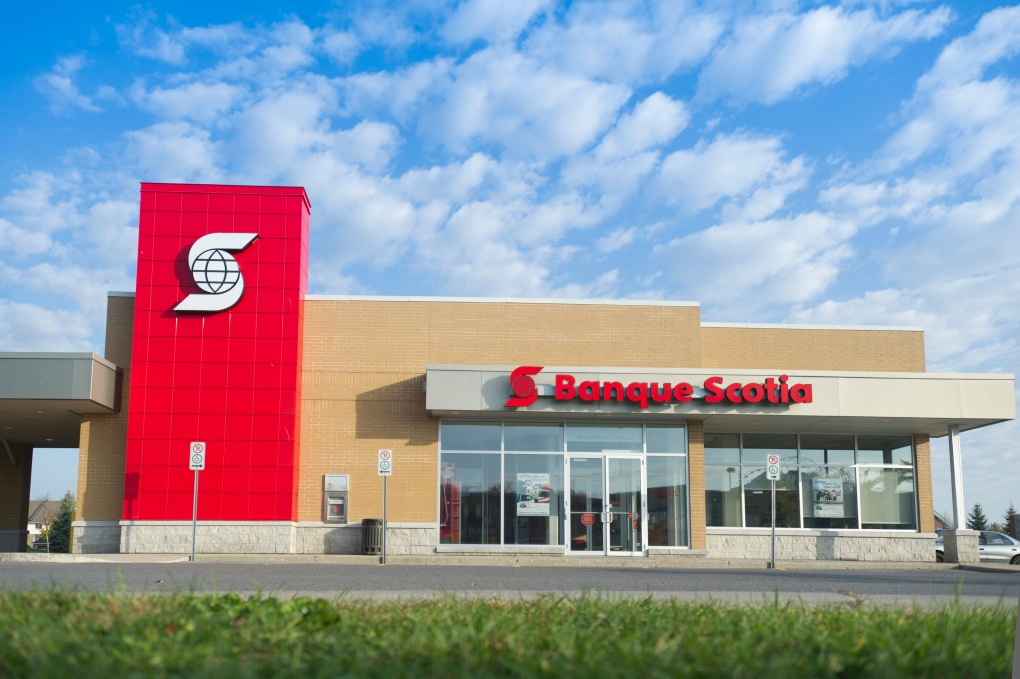 The Scotiabank logo is pictured at a bank branch in Gatineau in October 2013. (THE CANADIAN PRESS IMAGES / Nathalie Madore)

TORONTO -- Scotiabank (TSX:BNS) has agreed to settle a class-action lawsuit seeking unpaid overtime with some of its retail branch bank employees.

Details of the settlement weren't made public by the bank and are subject to court approval, but a spokeswoman for Scotiabank said Thursday the settlement was "not financially material" to the bank.

A hearing is scheduled for Aug. 12 in Toronto to approve the settlement.

Cindy Fulawka, a personal banking representative at Scotiabank, filed the lawsuit against the bank in December 2007 seeking to represent some 5,000 Scotiabank personal or senior bankers, financial advisers and small business account managers.

In her lawsuit, Fulawka alleges that the bank breached the minimum standards of overtime compensation provided for by the Canada Labour Code, as well as employment contracts. She also argues that Scotiabank was unjustly enriched by keeping money for itself that should have been paid as wages to Fulawka and other employees.

Scotiabank created "a working environment and circumstances in which the class members are required to work overtime hours in order to carry out the duties assigned to them, actively dissuaded from claiming or obtaining compensation for their unpaid overtime, failing to maintain accurate records of all actual hours worked by the class members and imposing on the class members an overtime policy that purports to create an unlawful barrier to payment of over time," the lawsuit says.

In addition to lost wages, the suit also asked the bank to change its policies and practices relating to overtime compensation.

Scotiabank said Thursday that if the settlement is approved, the bank will invite all eligible class action members to make claims for any overtime that was worked, but not previously compensated, during the claim period identified in the suit.

"Scotiabank is participating in the settlement proposal to reinforce its long standing commitment to pay employees for their overtime work or provide time in lieu," the company said in a release.

"The bank is confident that its employee policies, including on overtime, have been applied fairly and consistently."

According to her claim, she worked on average between five and 15 hours per week of additional work to meet work and sales requirements, but wasn't paid beyond her agreed maximum standard hours, and was discouraged from claiming overtime in what was a "uniform, consistent and system practice" at the bank.

In March 2013, the Supreme Court of Canada cleared the way for the class-action lawsuit against Scotiabank and another against the CIBC that alleged thousands of workers were denied overtime pay even though they were assigned more work than could be completed within their standard hours.

In the CIBC case, teller Dara Fresco filed a lawsuit in June on behalf of more than 31,000 tellers and other front-line customer service employees working at more than 1,000 CIBC branches across Canada. That suit also covers assistant branch managers, financial service representatives, financial service associates and branch ambassadors at CIBC.

CIBC said Thursday that it plans to defend its position vigorously in court.

"The overtime policy at CIBC is clear, easily accessible to employees and exceeds legislative requirements in Canada. Under our policy, where overtime is requested or required of eligible employees, it is paid."

"CIBC also has a clear process by which to resolve employees' concerns about overtime that includes escalation to senior management as well as a separate external process through the government," the bank said in an emailed statement.