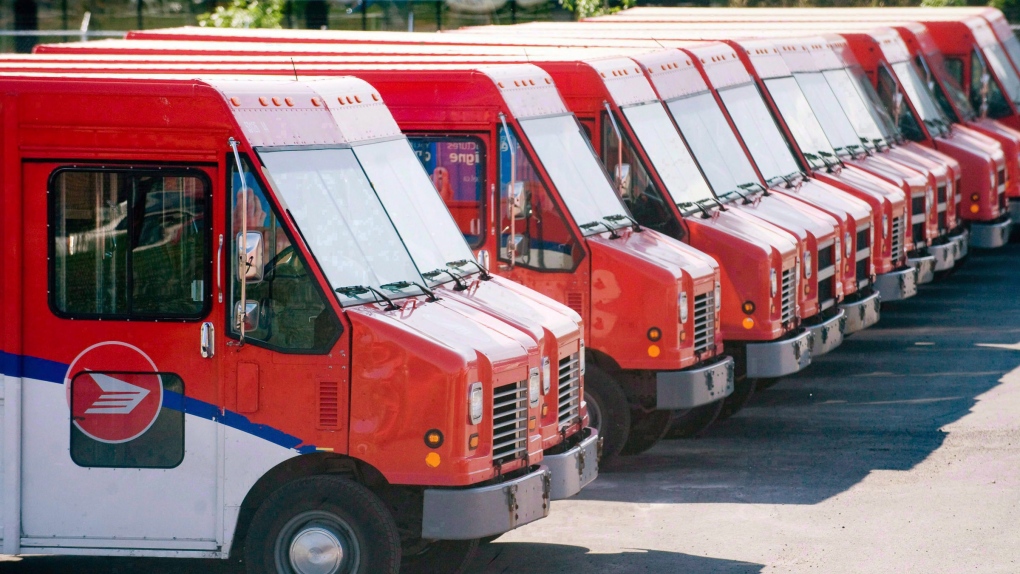 Canada Post vehicles sit outside a sorting depot in the Ville St-Laurent borough of Montreal, in a June 6, 2011 photo. (THE CANADIAN PRESS/Graham Hughes)

A new study shines a light on how the cost of bargains Canadians find online can quickly rise when they cross the border.

The C.D. Howe Institute study, released Thursday, says increasing Canada's $20 threshold on duty-free imports would not only benefit Canadian consumers and business, but it would also be fiscally neutral or positive for government coffers. The study’s authors note that any revenues the government collects in duties and taxes on relatively low-cost items is eclipsed by the high cost of federal custom agents needed to monitor the goods coming over the border.

Canada’s de minimis threshold (DMT)– the ceiling for imports, below which no tax or duty is charged and the clearance procedure into the country is minimal – is $20.

Any goods entering the country that are valued over $20 could be intercepted by customs officers who can levy additional federal and provincial taxes and duties.

The cost of an item purchased on eBay.com from a seller in the U.S., for example, could see a significant spike when taxes, duties, brokerage fees and costly border delays, are all factored in.

Unchanged since 1985, it is the lowest among industrialized countries.

The report authors say with the dramatic increase in online shopping, the Canadian government is taking in more revenue from the duties and taxes collected on small items imported by mail.

"What is gained in revenue, however, often fails to outweigh the high costs of customs procedures and assessment," according to the report.

The study, commissioned by eBay, found that Canada's low DMT is a "money-losing endeavor."

Christine McDaniel, a senior economist with Washington, D.C.-based Sidley Austin LLP and the study's co-author, said small businesses are hardest-hit by Canada's DMT as they're increasingly relying on imports for supplies.

"Our study shows that raising it would produce a net benefit for government, consumers and businesses," McDaniel told CTV News Channel on Thursday.

The report looks at the potential economic effects on government, consumers and businesses of increasing the DMT to CAD$80, CAD$100 and CAD $200.

By holding the DMT at $20 instead of $80, the study found that the government collects $39 million in additional revenues, but at a cost of $166 million.

With an increase in DMT, government agencies, such as Canada Post and the Canada Border Services Agency would no longer expend resources to assess the low-value parcels, the reports notes.

Businesses, meanwhile, would see cost savings, as they no longer have to spend time and money on the paperwork needed to process low-value parcels in order to claim tax credits.

The authors say that the report does not consider the effects a higher DMT would have on Canadian retailers.

"From an economic policy-maker's perspective, it's clear that the Canadian economy is spending a lot of money to collect not very much," McDaniel said. "And consumers and businesses, especially small businesses, are paying for it."