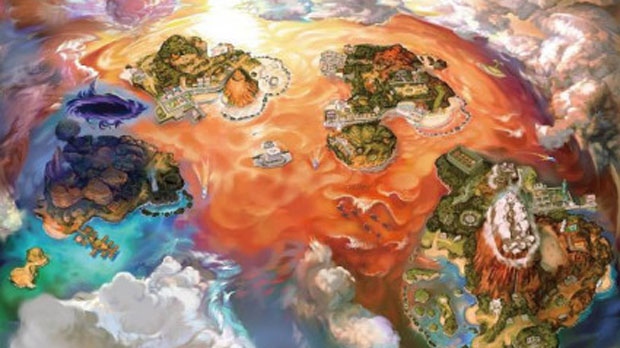 A shift to the Switch beckons for Pokemon in 2018 and beyond. Shown: Pokémon Ultra Sun and Moon world map. (Nintendo / The Pokemon Company)

The twin release of Pokemon Ultra Moon and Pokemon Ultra Sun in Nov. 2017 will be the core franchise's last appearance on Nintendo 3DS, paving the way for a shift in focus to other formats.

Though inextricably linked to Nintendo, the mainline Pokemon games are in fact developed elsewhere, at Tokyo-headquartered studio Game Freak.

For over two decades, Game Freak has overseen some 26 entries to the franchise, from its 1996 beginnings with "Pokemon Red," "Pokemon Green" and "Pokemon Blue," to 2016's "Pokemon Sun" and "Pokemon Moon."

But this year's remastering and reimagining of "Sun and Moon," known as "Pokémon Ultra Sun" and "Pokémon Ultra Moon," will together become the last of eight Pokémon role-playing adventures released on the portable Nintendo 3DS console.

Released in 2011 and treated to five subsequent refreshes over the intervening years, the 3DS has sold upwards of 67 million units in the six years since.

That's actually not too impressive for a Nintendo system -- its clamshell predecessor, the 2004 DS, shifted 154 million units, surpassing the Game Boy and Game Boy Color's combined 118m as well as the Game Boy Advance's 80 million-plus.

But during a time when the Wii U dramatically failed to live up to the Wii's 100 million home console performance, the 3DS's fortunes kept Nintendo buoyant.

Even with the new Nintendo Switch console on the market, and conceptually superseding the 3DS with its ability to be played on the go or plugged into a larger screen, the six-year-old flip-top has not been retired.

At least, not officially, but the signs are that Game Freak is preparing to bet on the Switch's continued success after the November 17 release of "Pokémon Ultra Moon" and "Pokémon Ultra Sun."

After "trying to push the 3DS system to its absolute limits" with "Pokemon X and Y" and then "Pokemon Sun and Moon," Game Freak's director Sigeru Ohmori told IGN that "we're now feeling that perhaps ["Ultra Sun & Ultra Moon"] is the maximum of what we can get out."

"We're really treating Ultra Sun and Ultra Moon as the culmination of our work with the 3DS system."

Game director Kazumasa Iwao elaborated on "Ultra Sun and Moon," explaining that the development team was around half the size of that for the previous pair of games.

So what have the rest of the studio been working on?

Game Freak wouldn't say, though rumors about a Switch edition of "Sun and Moon," referred to as "Pokemon Stars," have been swirling since Nov. 2016.