Newfoundland to enjoy fastest-growing economy thanks to oil: report 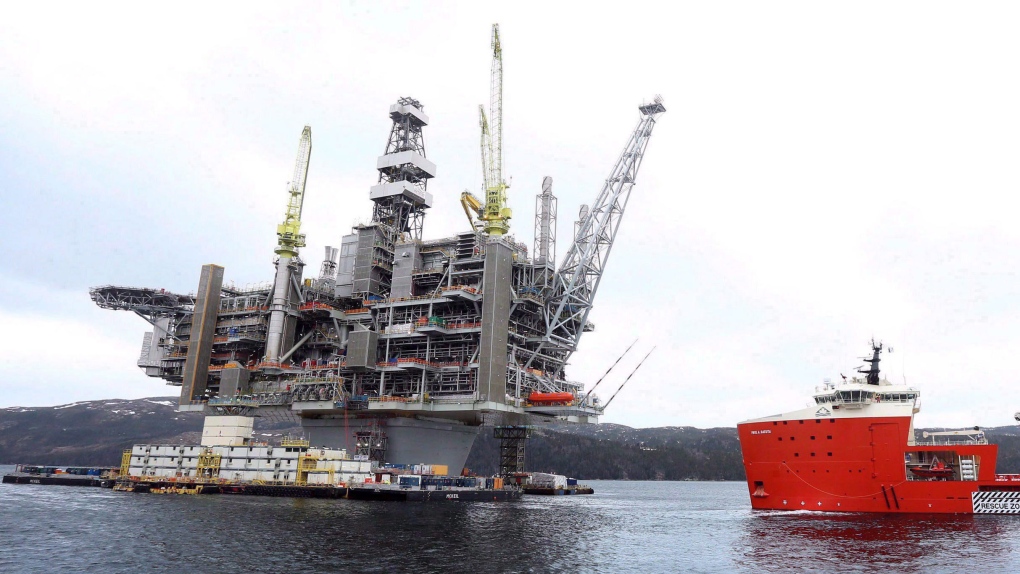 The Hebron Platform, anchored in Trinity Bay, N.L., is shown on Tuesday, April 18, 2017. Cash-strapped Newfoundland and Labrador has announced a 12-year plan to speed and enhance development of its offshore oil and gas resources. THE CANADIAN PRESS/Paul Daly

A dramatic economic turnaround is being predicted for Newfoundland and Labrador next year, according to a new report by a national economic think tank.

The Conference Board of Canada says the province is expected to lead the country in economic growth, thanks to offshore oil royalties.

Just a year after having the weakest economic outlook in 2018, the province's real gross domestic product is expected to grow by 5.2 per cent in 2019.

The provincial outlook report cited offshore oil activity and future developments like the Bay du Nord development project, expected to start construction in 2020, as "cause for optimism in the future."

Significant wage increases aren't expected until 2020 but employment numbers in the province should increase next year on the strength of the expanding offshore oil industry.

Prince Edward Island and British Columbia are also expected to see strong growth of 2.7 per cent next year, according to the report, with P.E.I. benefiting from steady immigration and a booming tourism industry.

Demand for P.E.I. products has also increased, and a balanced budget is expected to help the province tackle fiscal challenges like increasing health-care costs as well as rising household and government debt.

Alberta's domestic economy has picked up and GDP is set to grow 2.2 per cent in 2019, the report said, but uncertainty in the province's own oil sector around prices, transportation and mandated production cuts could result in lower-than-projected growth.

Other provinces are expected to see slower economic growth of below two per cent in 2019, with Nova Scotia and New Brunswick forecasted to see growth of one per cent and 1.3 per cent, respectively.

Both provinces are facing slower growth as populations age and baby boomers retire from the workforce.

Quebec and Ontario's economies are slowing down but both are predicted to grow by just under two per cent, according to the report.

In Quebec, economic growth is expected to slow to 1.8 per cent as more moderate job creation and increasing interest rates hold back consumer demand in the province. The numbers show a significant economic slow-down after strong economic growth of three per cent in 2017 to 2018.

Factors like a weaker housing market and more cautious consumer spending in Ontario contribute to a forecasted real GDP increase of 1.9 per cent in 2019, down from 2.2 in 2018. The report also cited the planned closure of General Motors' Oshawa plant as a potential downside risk to the province's forecast.

Meanwhile, job creation remains slow in Saskatchewan as the province is predicted to see modest growth of 1.6 per cent.

That number is still a bump from the province's expected 0.5 per cent growth in 2018, but will likely be held back as major construction projects like the Regina Bypass and Chinook Power Station near completion.

Manitoba is also expected to see modest growth of about 1.9 per cent as mineral production wanes and the province sees weaker investment as Manitoba Hydro's major construction projects wind down.