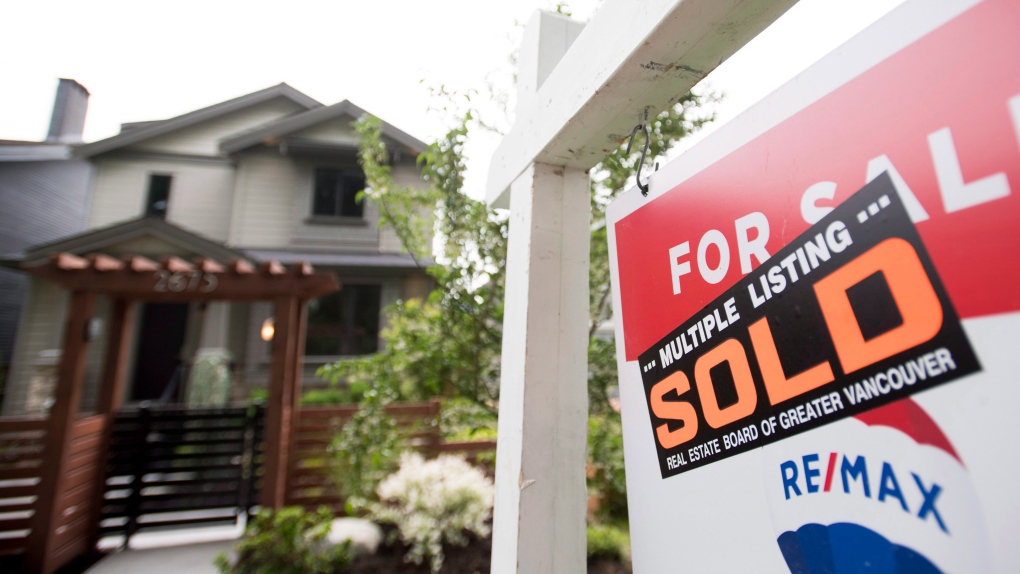 A real estate sign is pictured in Vancouver on June 12, 2018. (Jonathan Hayward/ THE CANADIAN PRESS)

Montreal's sizzling real estate market has spawned bidding wars, a common occurrence in recent years in the frenzied Toronto and Vancouver markets, but a rare phenomenon in Canada's second-largest city.

A mix of very low inventory, a solid Quebec economy and influx of foreign buyers has caused home prices in Greater Montreal to appreciate above the national average for the first time in seven years.

In contrast to mixed performances in the Toronto and Vancouver markets that tend to dominate headlines, Montreal's market is on a solid upward trajectory.

The Greater Montreal Real Estate Board reported home sales increased in July for their 41st consecutive month, hitting an eight year high for the month. The median single-family home price rose six per cent compared to the same month a year ago to $336,250 -- still much lower than in Canada's biggest market of Toronto, where the average home price stood at $782,129 in July.

The bidding war situation -- in which interest in a property is so strong that sellers can solicit quotes above the asking price from multiple buyers and choose the best offer --is especially strong in Montreal's West Island, where nearly one quarter of houses sold above the asking price in the second quarter, according to Royal LePage.

Sellers on the island of Montreal received bids about $15,000 or 3.5 per cent above asking price, said Dominic St-Pierre, senior director for Royal LePage in Quebec.

"It's probably going to get worse before it gets better," he said.

"Demand is still strong and the inventory is still going down and it's probably going to continue to go down for another six to nine months before it will stabilize."

The threat of further interest rate hikes, new listings and rising new home construction will eventually bring the market more into balance and relieve some pressure on buyers, he said.

Montreal's last sellers' market that prompted bidding wars occurred a decade ago, before the financial crisis.

For buyers, bidding wars can be an extremely stressful and expensive process, but for sellers, they are huge money-making opportunities.

Elena Trigiani and her husband, Thomas Poirier, were recently forced to pay 15 per cent above asking to come out on top in a war with six other bidders.

"The house in all fairness was priced for a bidding war," said the 29-year-old soon-to-be first-time mother.

The couple braced for battle after seeing lots of friends miss out on homes because they failed to go all-in.

"We knew that we were going to have to be able to react quickly if we knew the house was for us and that's what we did," she said.

Sellers, Megan Mallette-Di Liello and Patrick Vena reaped the benefits of being on the flip side, receiving an extra $20,000 when they sold their home listed at $735,000 in nearby Beaconsfield.

The parents of two young children knew from friends that there was a possibility of multiple offers but didn't want to get their hopes up.

"We were definitely satisfied. We didn't expect that," she said.

Di Liello had heard of sellers who deliberately listed at a low price to create a bidding war.

"That wasn't our intention. We thought what we listed it at was fair, and so to get over that, we were surprised."

While Montreal's real estate market is strong, the degree of over-bidding pales in comparison with Toronto and Vancouver, where some homes attracted scores of bids in their heydays and sold for $100,000 over asking.

"The next bidding war that they got into they would be that much more determined and that was one of the things that caused the laddering up of prices," he said in an interview.

Henderson also believes there's more runway for bidding wars for homes priced under $1 million because of the lower prices of homes in Montreal.

"Montreal has suffered for a long period of time under sort of a cloud of political uncertainty, but given its stability over the last number of years and the fact that the existing government is not expected to do anything radical, I think that is what has allowed Montreal now to play a bit of catch-up."

Montreal realtors say the inflow of foreign buyers that followed the introduction of taxes on them in Toronto and Vancouver have made a difference even if their numbers are relatively small.

Another factor on the West Island is the lack of housing options for seniors. That has convinced baby boomers to hang onto their large homes, said Jay Deakin, owner of Deakin Realty.

The volatility has made it hard to price homes and know what to expect in the coming months, he said.

"I'd like to say that we all saw this coming, but most of the brokers I talk to we didn't see the last 18 months coming. We weren't expecting that type of increase."