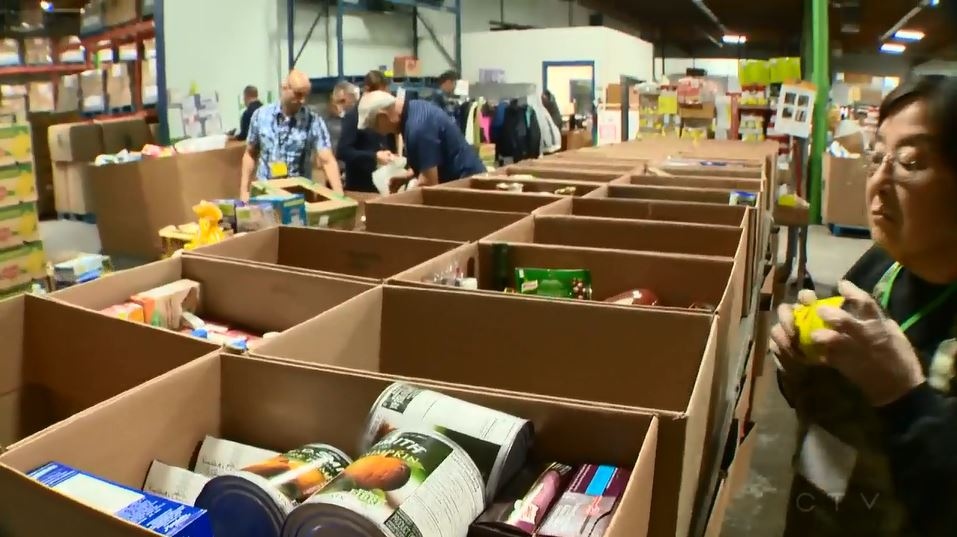 Donations made to a food bank are shown in this file photo.

With Loblaw Companies Ltd. offering customers $25 gift cards after admitting its part in a bread price-fixing scheme, some are saying the best use for that money would be to give it to charity.

Loblaw Companies and George Weston Ltd. will receive immunity from Canada's competition watchdog for their part in the price-fixing arrangement, after admitting to the scheme.

As a goodwill gesture, they’re offering gift cards to any customer who bought packaged bread products at any of their stores before March 1, 2015.

Loblaw CEO Galen G. Weston said Tuesday that the company hopes that customers will see the $25 “as a meaningful amount that demonstrates our commitment to keeping their trust and confidence.”

But some customers say they would rather have that money donated to a local food bank or to someone else in need.

Take your Loblaws card and shove it. Into the hands of someone that needs it. Everyone go here. https://t.co/ACNqhqky1i Register to get your card and then donate it.

Many are pointing out that $25 is not that much money for many Canadians. But given that Loblaw expects 3 to 6 million customers to receive the cards, that could potentially add up to a whopping $75 million to $150 million for those in need.

EVERYBODY. ABSOLUTELY EVERYBODY IN CANADA. SIGN UP. THEN SEND YOUR CARDS TO THE FOOD BANK. https://t.co/E8OyjRJgai

Loblaw spokesperson, Kevin Groh, told CTVNews.ca in an email that Loblaw thinks donating gift card to food banks is “a lovely idea, as we’re already a leading contributor to food charities nationwide. With the card in hand, customers could easily buy food for themselves or for a food bank,” he said.

He did not say whether Loblaw would provide an option on its website to have the gift card money sent directly to charity, saying the company’s focus “is really on customer trust and making sure we can efficiently put money in the hands of individual Canadians.”

Best idea I've heard re. #Loblaws bread price-fixing scheme --> Sign up for their $25 gift card and donate it to your local shelter or food bank. Spread the wealth. https://t.co/obc6j9hAI6

Michael Maidment, the executive director of the Ottawa Food Bank, has noticed all the chatter about donating the gift cards to organizations like his.

“I think it’s a great idea in these circumstances,” he told CTVNews.ca in a telephone interview.

“If people are willing to donate them – and it seems they are willing, based on all the talk o on social media -- that would be a great boost to food banks.”

He said food banks like his can often make cash donations go further than donations of boxed or canned foods.

“When we buy, we typically don’t buy at retail prices; we buy from wholesalers because we buy large quantities.”

Every dollar donated to a food bank is worth $5 in food, when you take into account food that is both bought and donated from wholesalers, he said.

“That’s the kind of buying power we have with cash.”

Food Banks Canada spokesperson Marzena Gersho says her organization is happy to hear that so many Canadians are considering donating gift cards to their local food bank.

She says more than 800,000 individuals turn to a food bank for help every month and donations of both food and cash are needed all year long.

If 1/2 of the estimated 4,000,000 people donate their cards, it would mean local food banks would receive $50,000,000 in gift cards. Imagine the enormous impact that could have. I don't ask often but please share! #BreadForFoodbanks 2/2 pic.twitter.com/n7MEqb59pZ