Imperial Tobacco gets into vaping business 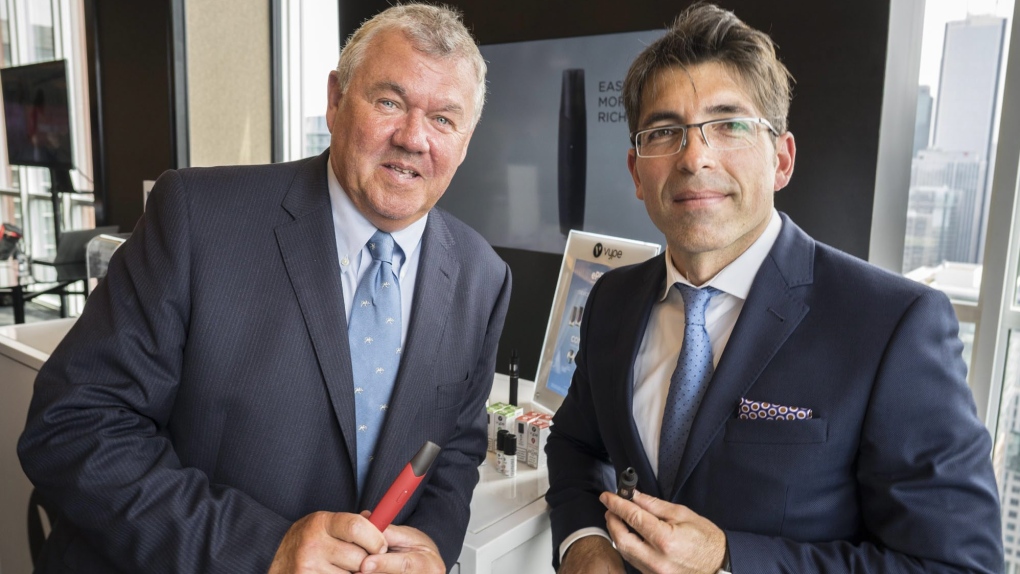 TORONTO -- Using World No Tobacco Day as a backdrop, Imperial Tobacco officially unveiled a vaping product to the Canadian market Thursday, saying the company is moving to help transition smokers away from combustible cigarettes to potentially less harmful products.

At a product launch in Toronto, the subsidiary of British American Tobacco (BAT) introduced Vype, a fillable e-cigarette that produces an inhalable aerosol that comes in a number of flavours and is available with various levels of nicotine, including one with none of the addictive chemical.

Jorge Araya, president and CEO of Imperial Tobacco Canada, said the aim of Vype and the company's heat-no-burn cigarette Glo, launched last year, is to help Health Canada reach its goal of having less than five per cent of the population smoking traditional cigarettes by 2035.

About 17 per cent of Canadian adults -- or about 4.5 million -- currently smoke combustible cigarettes. But over the last four to five years, almost two million Canadians have become "vapers," and many of them are either current or former smokers, Araya said.

E-cigarettes, in particular, are being touted as a means of helping smokers quit the addictive habit, which can cause lung cancer, chronic obstructive pulmonary disease and cardiovascular problems.

Imperial Tobacco, which sells such brands as Du Maurier, Players and Peter Jackson, has half of Canada's market share for cigarettes, said Araya, and the company's goal is to dominate the vaping market as well.

"Our journey, which we call 'transforming tobacco,' places more control and choice in the hands of consumers.... Transforming tobacco is our acknowledgment that society and the industry is changing and it is our commitment to lead this change through empowering consumer choice."

But David Hammond, a professor of public health at the University of Waterloo who specializes in tobacco control policy, said any company that really wanted to reduce the smoking rate would stop marketing cigarettes and challenging public health measures like plain packaging and health warnings on cigarettes.

"If they were really interested in doing that, they would stop those activities and get out of the smoked cigarette business," he said. "The best outcome here is for nobody to be using e-cigarettes or vaping and nobody to be smoking -- full stop."

Hammond said nothing else generates revenue and keeps a customer base like smoked cigarettes, so Big Tobacco "never really had a reason to cannibalize their key demographic."

"But, of course, once the market started to shift, they have an interest in being in that space," said Hammond, stressing that he has no problem with companies selling and making profit from products.

"What I do challenge is their claimed interest in reducing the number of smokers in Canada."

Last week, Bill S-5 to amend the Tobacco Act received royal assent, permitting the sale of vaping products to those age 18 and older, but restricting their promotion, including a ban on all lifestyle advertising as well as sponsorships and celebrity endorsements -- similar to prohibitions placed on tobacco products.

"The Canadian government in a way has been late to the game when it comes to vaping products," Araya told an audience of stakeholders at a swank downtown hotel.

But with the passage of Bill S-5, "these products are now legal in Canada, and we have now launched our line of potentially less harmful products called Vype across the country," he said, noting that BAT has invested US$2.5 billion over the last six years in their development.

However, Araya pressed the point that provincial regulations that treat vaping products like cigarettes -- often restricting visibility at retail counters and prohibiting information about how they are used -- will leave consumers who want to switch from tobacco without any knowledge of their existence on the market.

"A smoker walking into a convenience store to buy combustible cigarettes will never know that potentially less harmful alternatives are available," he said, noting that BAT has captured a significant portion of the vaping and heat-not-burn market in a number other countries.

"This is where we need federal leadership to have a very homogenous policy across the country."

The Vype system is made up of a battery-powered heating unit, which will retail for about $40, with bottles of e-liquids selling for about $7 each. Both are subject to HST.

The current device requires a user to fill a chamber with e-liquid from the bottle before turning it on, but Imperial plans to launch a version in July that uses a plug-in cartridge.