If you sold or used Bitcoin last year, the CRA needs to collect its due 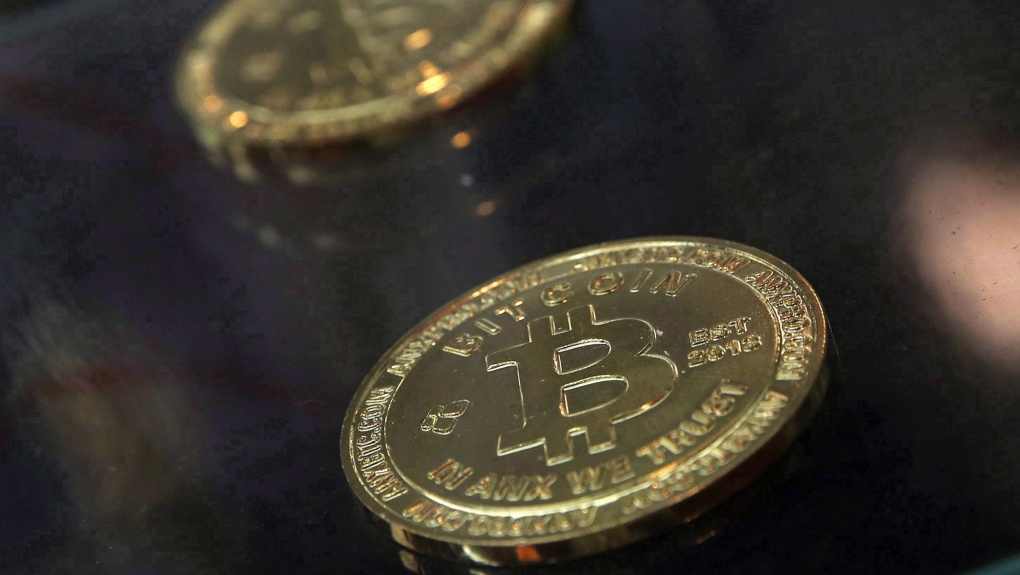 In this Friday, Dec. 8, 2017, photo, coins are displayed next to a Bitcoin ATM in Hong Kong. (THE CANADIAN PRESS/AP /Kin Cheung)

TORONTO -- It may seem early to start thinking about filing taxes, but this year's return could be particularly time-consuming for Canadians who have flocked to Bitcoin and other cryptocurrencies, especially those who don't realize they owe the government money.

No need to worry if you've purchased Bitcoin but haven't touched it since. But once that cryptocurrency is translated into a real-world dollar amount -- such as when you sell it or use it to buy something -- you are on the so-called tax man's radar.

The price of Bitcoin shot above US$19,000 in mid-December, prompting a surge of interest, along with some cautionary advice from officials. Bank of Canada governor Stephen Poloz warned about cryptocurrencies' risks and tax implications the same month.

"Characteristics vary widely but, generally speaking, they can be thought of as securities. The Canada Revenue Agency agrees," Poloz said during a Toronto speech. "That means, if you buy and sell them at a profit, you have income that needs to be reported for tax purposes."

But working out what to declare to the tax man is not that straightforward, experts say.

"There is no exact framework within the income tax act that tells us exactly how Bitcoin is taxable," said Lana Paton, managing partner of PwC Canada's Tax Services.

The CRA issued a letter in 2013 that stated that Bitcoin and other digital currencies were not considered to be legal tender. Instead, the government agency said, cryptocurrencies are viewed as a commodity. As such, any resulting gains or losses could be taxable income.

But until the gains on that virtual currency are realized -- whether that is by selling the digital currency, or using it to make a purchase -- those gains are not subject to tax.

When cryptocurrencies are used to pay for goods or services, the rules for barter transactions apply.

For example, if a merchant accepted Bitcoin in exchange for a desk, a pair of glasses or jewelry -- all items that can currently be bought using Bitcoin -- the seller will need to include the fair market value of the good or service sold in their income for tax purposes.

"You are trading one good for another and you uptraded, so you gained in value," said H&R Block senior tax professional Valorie Elgar.

"You're supposed to claim that as a capital gain."

GST or HST also apply on the value of any goods or services purchased using cryptocurrencies.

When making a purchase, any gains or losses on the cryptocurrency are considered realized and must be reported, said Paton.

That gain, whether it is thousands of dollars or a couple of loonies, is subject to tax, said Paton. And avid users of Bitcoin should calculate this amount for all transactions during the tax year, she added.

As well, if someone used Bitcoin to purchase another cryptocurrency, such as Ethereum, he or she would be considered to have sold the Bitcoin for its value in Canadian dollars at the time of the transaction, said Elgar.

It's also important to keep in mind that the fees associated with cryptocurrency transactions would also reduce the gain (or add to the loss) that must be declared to the CRA.

The average Bitcoin transaction fee hit a high of US$55.16 in late December, according to BitInfoCharts.com, before slipping to US$8.53 on Jan. 28.

The cryptocurrency gained in this process will need to be reported as income, said Paton. However, these businesses will also be able to deduct associated expenses such as the cost of computers and electricity.

The flurry of Canadian companies that entered the cryptocurrency mining fray last year will be subject to these guidelines. But the tax implications and the recent plunge in prices -- Bitcoin briefly fell below US$10,000 this week -- might just temper the cryptocurrency frenzy in 2018.