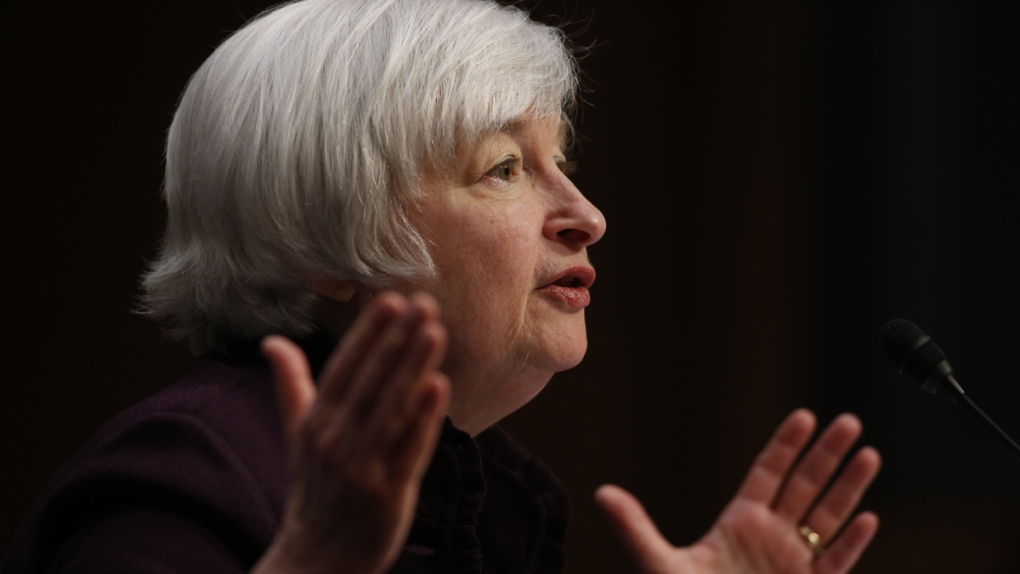 Federal Reserve Chair Janet Yellen testifies about the economy before the Joint Economic Committee of Congress on Capitol Hill in Washington, May 7, 2014. (AP / Charles Dharapak)

WASHINGTON -- Federal Reserve Chair Janet Yellen sounded an alarm Friday about widening economic inequality in the United States, suggesting that America's longstanding identity as a land of opportunity was at stake.

The growing gap between the rich and everyone else narrowed slightly during the Great Recession but has since accelerated, Yellen said in a speech at a conference in Boston on economic opportunity. And robust stock market returns during the recovery helped the wealthy outpace middle-class America in wages, employment and home prices.

"The extent and continuing increase in inequality in the United States greatly concerns me," Yellen said. "By some estimates, income and wealth inequality are near their highest levels in the past hundred years."

Yellen's extensive comments on economic inequality marked an unusual public departure for a Fed chair. Her predecessors as head of the U.S. central bank tended to focus exclusively on the core Fed issues of interest rates, inflation and unemployment. Indeed, the Fed's mandate doesn't explicitly include issues like income or wealth disparities.

But since taking over from Ben Bernanke in February, Yellen has made clear she is deeply concerned about the financial challenges that ordinary workers and families face.

Throughout this year, she has stressed the need for the Fed to keep rates low to boost economic expansion and hiring. She has said that the unemployment rate, now at 5.9 per cent, doesn't fully reflect the health of the job market: Yellen has expressed concern, for example, about stagnant incomes, the number of part-time workers who want full-time jobs and the many people who have given up their job searches and are no longer counted as unemployed.

In her first speech as Fed chair, she highlighted the hurdles faced by three unemployed workers. And in congressional testimony in February, Yellen called income inequality "one of the most disturbing trends facing the nation."

The widening gap in overall wealth is even more pronounced. The average net worth of the bottom 50 per cent of families -- a group of about 62 million households -- was $11,000 in 2013, Yellen said. Adjusted for inflation, that figure is 50 per cent lower than in 1989.

"I think it is appropriate to ask whether this trend is compatible with values rooted in our nation's history, among them the high value Americans have traditionally placed on equality of opportunity," said Yellen, a labour economist.

Many analysts argue that widening income inequality is hurting economic growth itself. The wealthy are receiving higher pay and rising investment earnings. Yet those households tend to spend less of their money than do low- and middle-income consumers who are dealing with sluggish wage growth. Because consumer spending accounts for roughly 70 per cent of U.S. economic activity, less spending tends to slow growth.

Yellen did not discuss the state of the economy, interest-rate policy or how her views might affect the Fed's actions. Nor did she address criticism that the Fed's super-low rates have helped sustain the wealth gap by fueling stock gains and facilitating mortgage refinancings. The affluent benefit disproportionately from stock-price increases and home refinancings.

"I do not mean to suggest that they account for all economic opportunity, but I do believe they are all significant sources opportunity for individuals and their families to improve their economic circumstances," Yellen said.

On Thursday, she visited a career centre in Chelsea, Massachusetts to meet with people looking for work.

At the Chelsea centre, Yellen listened to participants' stories about the job search difficulties they faced.

The Fed will next meet Oct. 28-29. It is expected to end the monthly bond purchases it has been pursuing to put downward pressure on long-term rates. But it's also expected to retain language that it plans to keep a key short-term rate at a record low for a "considerable time."

Most economists don't think the Fed will start raising short-term rates before mid-2015.