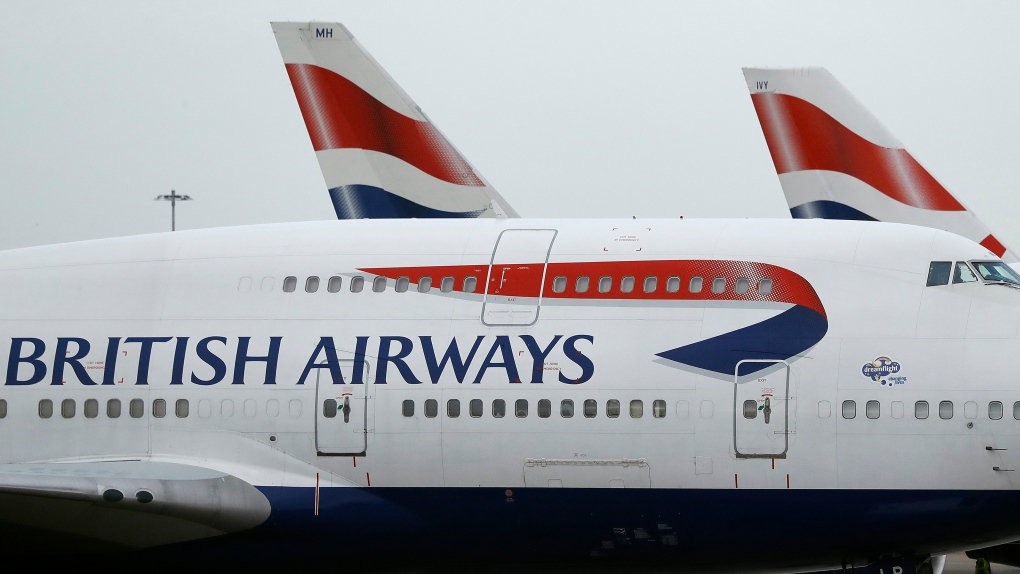 LONDON -- Canadian travel agencies are scrambling to help passengers whose British Airways flights have been cancelled on Monday and Tuesday after a pilots strike grounded the global carrier.

The airline says more than a dozen flights between Canada and London are slated to be cancelled over the two days, affecting about 3,500 passengers based on the size of the scheduled aircraft.

Toronto's Pearson International Airport is most impacted with four flights each day. One arrival and one departure are cancelled over the two days in Montreal, Vancouver and Calgary.

"Customers were sent email notifications if they have been affected," British Airways said in an advisory to travel agents.

Passengers can receive refunds or rebook for later flights. They may also be able to rebook on partner airlines such as American Airlines, Finnair and Aer Lingus, if seats are available.

Toronto travel agency TTI Travel says some customers have called to inquire but there doesn't appear to be any alarm.

"We've been looking at flights and trying to re-accommodate them and make some decisions around how we support them and what those options are," said TTI vice-president Lucy Lavigna.

Air Canada says it has added larger aircraft on the route between Toronto and London-Heathrow to accommodate increased demand it has seen in recent days.

"Last night we operated one flight on the route (we have four flights daily) with a 400-seat, Boeing 777 instead of the scheduled 298-seat Boeing 787-9, and will do the same tonight," said spokesman Peter Fitzpatrick by email.

"That makes for a total of about 400 extra seats in the market. We continue to monitor the situation, but there are no plans for additional capacity at this time, in part because our aircraft are already committed under the existing schedule."

WestJet Airlines said it's "business as usual" for the Calgary-based airline.

British Airways cancelled almost all its flights for 48 hours, affecting as many as 195,000 travellers, due to a strike by pilots over pay.

The U.K.'s flagship carrier said in a statement Monday that it had "no way of predicting how many (pilots) would come to work or which aircraft they are qualified to fly."

As a result, it said it had "no option but to cancel nearly 100 per cent" of its flights for the duration of the strike.

"We have supplemented our fleet by using aircraft and crew from other airlines (wet-leasing) and working with our partner airlines to schedule larger aircraft to take the maximum number of customers," said the trade support website that details customer guidelines.

British Airways operates up to 850 flights a day. London's sprawling Heathrow Airport was most affected by the work stoppage as it is the airline's hub and is used for many of the company's long-haul international flights.

The departure area at Heathrow Terminal 5 was almost empty, with only a handful of BA flights set to leave on Monday.

There were no queues at any of the check-in desks or security gates and only a handful of people waiting on benches. The terminal is typically quite busy.

British Airways said it stands ready to return to talks with the pilots' union, Balpa, and that it has offered all affected customers full refunds or the option to rebook. The airline had been preparing for weeks for the strike, giving travellers advanced notice.

"We understand the frustration and disruption Balpa's strike action has caused our customers," it said.

"After many months of trying to resolve the pay dispute, we are extremely sorry that it has come to this."

British Airways says it has offered pilots an 11.5 per cent pay raise over three years but the union says its members want a bigger share of the company's profits.

The union accuses British Airways of making big profits at the expense of workers who made sacrifices during hard times. British Airways' parent company, IAG, made a net profit of 2.9 billion euros (US$3.2 billion) last year.

"They've previously taken big pay cuts to help the company through hard times. Now BA is making billions of pounds of profit, its pilots have made a fair, reasonable and affordable claim for pay and benefits."

A further strike is penciled in for Sept. 27.

-- With files from The Canadian Press

There is Industrial Action planned by the pilots’ union, BALPA on 9 and 10 September 2019. We apologise for the significant impact this will have on our flights. If your flight is cancelled, please don’t go to the airport. For the latest info, visit https://t.co/rPEgyOeVyh.