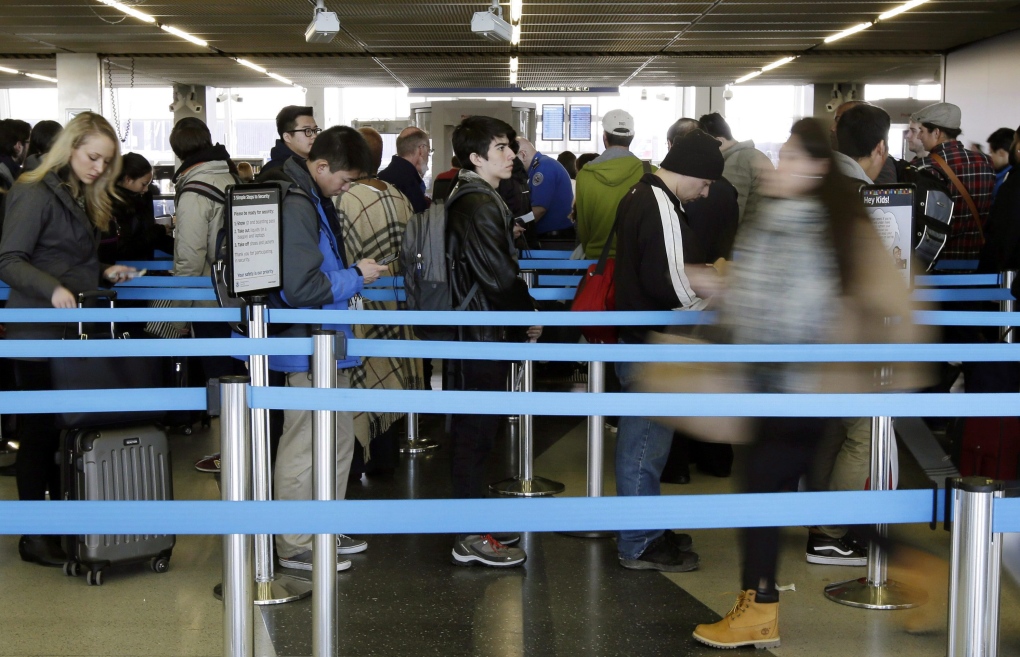 Travellers line up at a security checkpoint area in Terminal 3 at O'Hare International Airport in Chicago on Nov. 25, 2015. (AP / Nam Y. Huh)

"It is on the cusp of being a real problem, with serious, serious delays," says John Gibson, chairman of the Canadian Airports Council.

Canadian airports aren't currently facing the chronic disruptions that are increasingly angering U.S. passengers. Still, lines have steadily grown over the last few years as Canadian funding hasn't kept pace with the 21 per cent increase in passenger growth over the last five years.

The Canadian Air Transport Security Authority (CATSA) says, on average, it screens 85 per cent of passengers within 15 minutes.

But waits can be much longer at some large airports during peak travel times, with additional pressure potentially coming during the rush of summer travel - and the number of passengers is growing by 3.5 per cent each year.

If nothing is done to address the bigger volumes, Gibson said, passenger waits could regularly reach an hour.

The number of security screeners has in the past fluctuated depending on the size of government funding. More than 6,000 agents screened 58 million passengers last year.

The agency says it's doing the best it can with the resources it's provided by the government. An extra $29 million in the Liberal government's first budget will help to maintain the current threshold this year.

"Based on the long-term funding that we have right now, if we don't get additional funding then, yes (lines will be longer)," said spokesman Mathieu Larocque.

Passenger complaints associated with longer wait times have been growing, CATSA said in its 2015 annual report.

"As we see passenger growth across the country, most airports are seeing more passengers and that puts a greater demand on the system," said spokeswoman Erin Kennedy.

Transport Minister Marc Garneau said he got an earful about wait times during one of three roundtables he's held on proposed changes to the Canada Transportation Act.

"I think the system is working well. The only knock that I'm hearing is some people feel it takes too long to go through," he said in an interview.

"Being a traveller myself, I occasionally experience that."

The minister said it would be "premature" to comment on the 60 recommendations from former cabinet minister David Emerson's report or advice he's hearing from consultations, but said he plans to make specific proposals for change this fall. The public can participate in consultations on Facebook on June 15 in French and June 16 in English.

CATSA is funded from the Air Travellers Security Charge applied after the 2001 terrorist attacks to all flights. Originally created as a revenue-neutral way to fund airport security, the charge generates about $120 million a year more in revenues than is allocated to CATSA.

Relying entirely on passengers to fund airport security is a departure from other countries and other forms of transit, Air Canada wrote in a submission to Emerson's panel. In the United States, passengers pay only 30 per cent of security costs, with government funding 63 per cent.

"To ensure the aviation industry can reach its growth potential, the government should reinvest these funds into the industry, instead of directing the revenue elsewhere," the country's largest carrier wrote.

It called for Canadian fees to be lowered to match U.S. competitors, or at the very least ensure fees don't exceed the cost of providing the service.

The Montreal-based airline joined others in calling for mandated service levels.

Large global airports like London Heathrow and Hong Kong are required to process 95 per cent of passengers within five minutes.

Emerson backed many industry proposals, urging the government to reduce the security charge and provide its own funds. He also called for wait time limits to be mandated, and for Canada to change its approach to screening by focusing on passengers that pose the biggest threat rather than treating everyone the same.

He said CATSA has been reluctant to adopt technology and highlighted the TSA's pre-check program in the U.S. that streamlines screening for trusted travellers.

"If we have these tremendous lineups and inefficiencies in addition to the high cost structure in Canada, it makes it difficult for Canada to be perceived as a truly competitive international aviation market," he said in an interview.