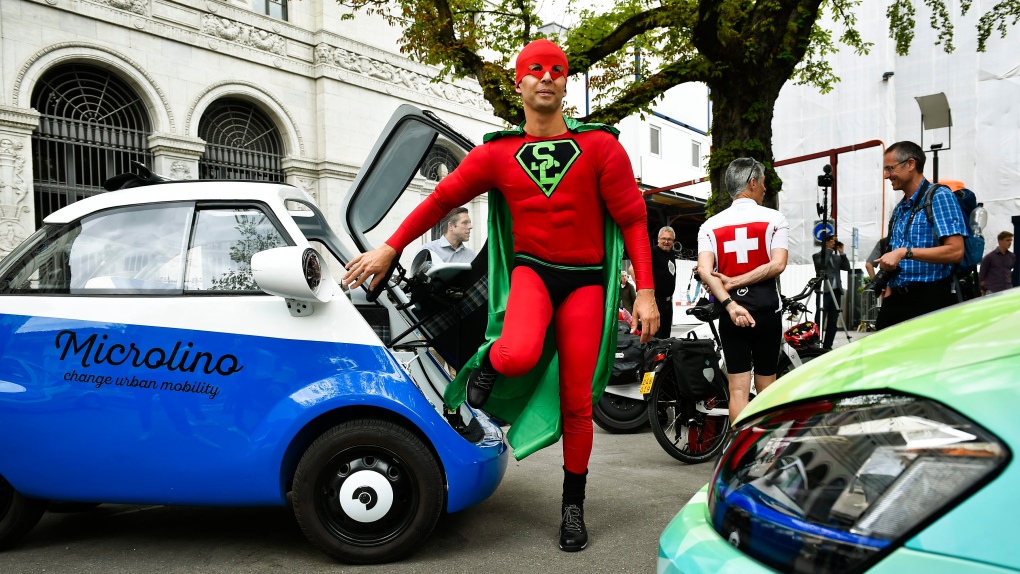 Driver Supercop from team "Maroc" gets out of his Microlino, during the start of the Wave Trophy 2017 tour, on Friday, June 9, 2017, in Zurich, Switzerland. (Michael Buholzer/Keystone via AP)

ZURICH -- Drivers in scores of electric vehicles, some in superhero or other quirky get-ups, embarked Friday on a weeklong trek around Switzerland as part of a grassroots movement to fight global warming.

The World Advanced Vehicle Expedition rally, now in its seventh edition, is the brainchild of an environmentally-minded Swiss former teacher who wants to promote plug-in vehicles over carbon-spewing combustion engines.

The rally takes the teams over 1,600 kilometres (995 miles) in eight days. It started in downtown Zurich with a ceremony among EV enthusiasts and no small number of gawking passers-by.

A total of 112 trucks, cars, motorbikes and three-wheeled contraptions somewhere in-between, all electric-powered, are riding in what's billed as the largest electric vehicle rally of its kind in the world.

One driver from Morocco wore a cape and superhero outfit, calling himself "Super-COP": an allusion to the U.N.-backed Conference of Parties process that led to accords like the Paris climate agreement in 2015.

The vehicles must run on electricity during the rally and travel at least 250 kilometres (150 miles) per day. Re-charging stations dot the route.

Nearly half of the vehicles this year are from Switzerland, while more than one-quarter come from Germany. Countries including Austria, Italy, France, Romania and Morocco are also represented.

Founder Louis Palmer, 44, quit his job as a teacher a decade ago and fulfilled his dream of building a solar-powered car -- getting help from researchers and supporters across Switzerland.

In 2010, Palmer travelled the world in his "solartaxi" for the adventure and to drum up attention and interest in cleaner transportation.