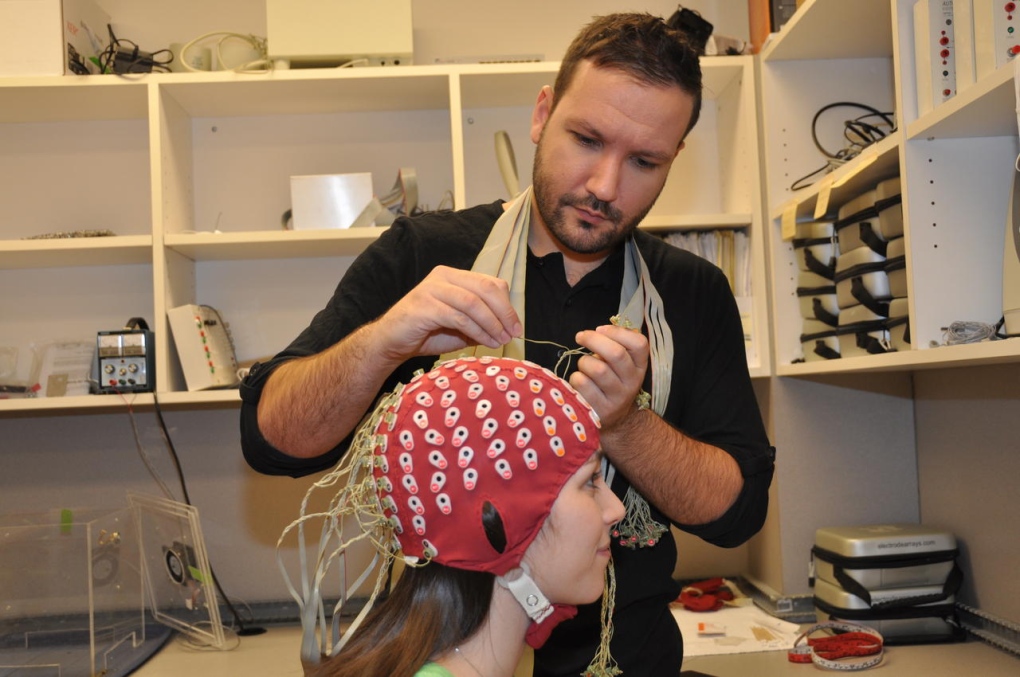 John Gaspar, an SFU psychology doctoral student, places 128 electrodes into a cap. The electrodes will pick up tiny changes in the wearer's brain activity. (SFU)

What sets intelligent people apart? Is it that they just know a lot more stuff? Have they done more reading? Studied harder?

Researchers at Simon Fraser University in Burnaby, B.C. recently found that people who perform well on memory tasks are those who are able to ignore distractions. Those who don't do well on the tests become distracted and miss key information.

The researchers had participants complete a visual test to gauge their "working memory" -- that part of our memory that acts as a sort of clipboard allowing us to remember a phone number for a while, for example.

The participants were shown a series of coloured boxes on a screen for less than a second and then had to remember as many boxes as they could. Several objects designed to distract the participants appeared on the screen at the same time.

The researchers also used EEG brain caps to track whether the participants' brains were processing all those irrelevant visual objects while doing the memory task. 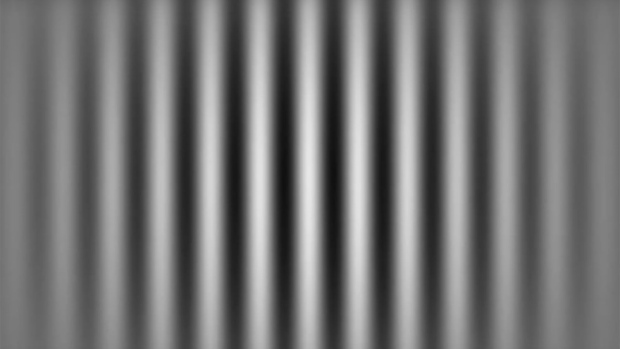 This isn't the first bit of research to link the ability to ignore distraction with higher intelligence.

One study a few years ago found that researchers from the University of Rochester could even predict how well someone would do on an IQ test based on their score in a visual distraction test.

The participants were asked to watch very brief video clips of black and white bars moving inside circles on a computer screen. They simply had to say which direction the bars were moving: to the right or left.

The bars were presented in three circle sizes, with the smallest circle dead centre of the screen, where human motion perception is known to be optimal. Afterwards, the participants took a standard IQ test.

(Here's the link if you want to try the test yourself https://youtu.be/qxt2Uo_GuXI)

Those who were faster at catching the movement of the bars in the smallest circle were most likely to have the highest IQ scores. The researchers believe that's because people with higher IQs have faster reflexes and are quicker at making perceptual judgments quickly.

Interestingly, those with high IQ scores were not great at detecting the bar movement in the bigger circles. Rather seeing that as a flaw in the high IQ participants, the researchers think that is evidence that the smarter participants had more of an ability to ignore large, background motion.

Lead researcher Duje Tadin said in a statement when the study was published in the journal Current Biology that it is not that people with high IQ are better at visual perception.

"Instead, their visual perception is more discriminating. They excel at seeing small, moving objects but struggle in perceiving large, background-like motions," he said.

The art of ignoring can be learned 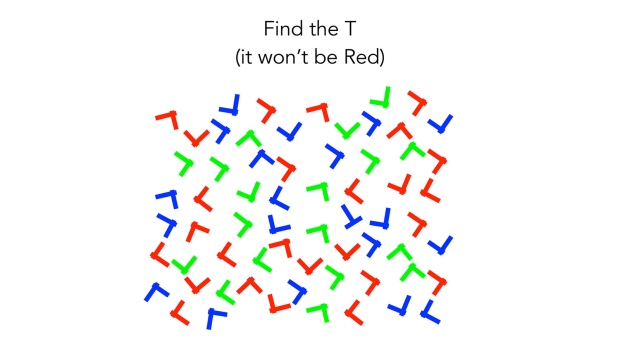 So essentially, smarter people are better at staying focused.

Given how many distractions we face in our modern lives, it's no wonder so many of us complain about feeling scatterbrained. Which may be why there is so much interest in yoga, mindfulness or meditation classes these days: we are desperate to learn how to focus.

Recently, researchers have found that people can learn how to be less distracted -- at least in their visual perception. The key lies in not just knowing what to look for but also what not to look for.

For this study, researchers at Johns Hopkins University conducted experiments in which participants were asked to search for certain letters on a computer screen among other similar shapes in assorted colours. Sometimes, they were told the letter would not be a certain colour, such as red; other times they were given no colour hints.

(For an example of the test, watch this video: https://www.youtube.com/watch?v=q5UVJCnsxrI)

At first, when participants were told they should ignore one colour, their reaction time at finding the letter slowed. But after extended practice -- about 100 trials -- they got better at finding the target letters and became faster at it than participants who weren't given a colour to eliminate.

The researchers conclude that while learning to disregard distractions of "competing stimuli" might initially slow people down, over time, people can learn to become more efficient when they know what is not worth paying attention to.