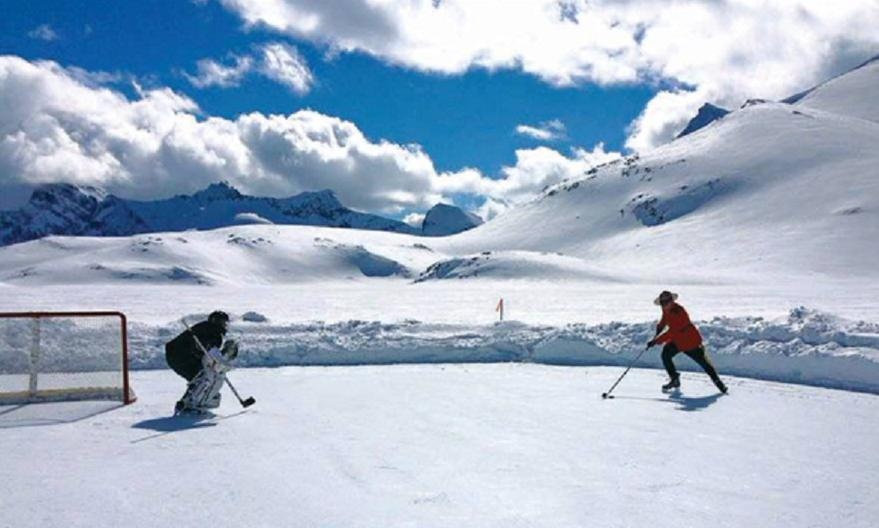 Many legendary hockey careers start on backyard rinks and frozen ponds, where the NHL’s future superstars take their first strides toward future greatness

Perhaps the most famous example is “The Great One” himself, Wayne Gretzky, who learned to skate on a backyard rink built by his father, Walter, in Brantford, Ont. Wayne and Walter often speak about those early days on their backyard ice sheet, where the elder Gretzky taught his son how to play the game, and how to see the ice like no other player ever would.

Growing up, Gretzky idolized Detroit Red Wings Star Gordie Howe, who had also started his hockey-playing career on outdoor ice rinks. Gretzky would eventually shatter most of Howe’s NHL scoring records when he grew up, but he continued to describe Howe as the best player to ever play the game.

In a 2014 interview Gretzky conducted with Howe, published by the Canadian Press, Howe told Gretzky that he would spend every childhood moment he could skating outside, in part because there were few chances to play outdoors.

“The rink was just boards and ice,” Howe told Gretzky at the time. “In the Depression there was no money to do much – I think we were lucky there was man-made ice to skate on.”

It used to be that most players in the NHL would get their start on outdoor rinks, back in the early days of the league, when the Original Six teams were populated by players who grew up during World Wars or the Great Depression. The Montreal Canadiens’ dynasties of the 1930s, 1940s and 1950s, for instance, relied heavily on players who learned to skate outside, such as Maurice Richard, Howie Morenz and Jean Beliveau.

But those days are long past, and most young players now spend the majority of their time playing in state-of-the-art indoor facilities, and only head outdoors for the novelty of the experience.

Gretzky started skating half a century ago, and since then, climate change has noticeably warmed Canada’s winter season. Back in 1965, the Gretzky family would have had no trouble constructing and maintaining a backyard rink, with an average temperature of -5.8 Celsius in January. That’s become more difficult in recent years, such as in 2012, when Brantford experienced an average temperature of -1.2 C in January.

But according to a new study, Canadians across the country should expect shorter skating seasons, and possibly fewer outdoor rinks, in the next 100 years.

Canada’s average winter temperatures are on the rise, and as the country’s cold months get warmer, the number of viable days for skating outside is expected to dwindle, according to a study by researchers at Wilfrid Laurier University. In fact, some cities could see up to one-third of the outdoor skating season disappear over the next 100 years, the study says.

“Canadians need to be worried because, over the course of the coming century, the opportunities to skate outside will become fewer,” said Robert McLeman, a geography and environmental studies professor at WLU, and co-author of the study. McLeman told CTVNews.ca that the warming threat is greatest for rinks in southern Ontario and Quebec, where the number of viable outdoor skating days could drop by as much as 34 per cent by 2115. Other, colder areas, such as Calgary, could experience a 19 per cent drop in their viable skating season.

McLeman says it takes about five to 10 days of cold temperatures – preferably around -10 Celsius – to build an outdoor rink, and then daily temperatures below -5 C to maintain it.

But according to projections from the Intergovernmental Panel on Climate Change, Canada can expect to see fewer days below that “magic number” of -5 C in the coming century, meaning it’ll become more difficult to keep outdoor rinks frozen.

For instance, McLeman predicts the current range of 40-50 skating days in Toronto could drop to as few as 25-30 days later in the century. And with such a small window available for rink-building, some enthusiasts may give up on the effort altogether. “It begs the question: are you going to build an outdoor rink for that short a period of time?” he said.

McLeman and his co-authors developed their study based on data gathered through their website, RinkWatch. The site encourages people to participate in a bit of daily “citizen science” by recording whether or not the rinks in their neighbourhood are viable for skating. The study incorporates about 11,000 observations from 961 rinks across the country, recorded during the winters of 2012-13 and 2013-14.

Researchers compared the ice condition reports to weather reports in those cities, in order to determine the maximum temperature at which a rink could survive outdoors. They then used that number to determine the length of the skating season in each region.

The study, which is co-authored by WLU academics Colin Robertson and Haydn Lawrence, is published in the Nov. 5 edition of the Canadian Geographer.

Canada’s average winter temperatures have been trending upward for decades, with an average increase of 3.0 degrees Celsius observed between 1948 and 2014, according to Environment Canada.

McLeman called the shrinking skating season a good indicator of the effects of climate change on everyday Canadians’ lives.

“Here’s an example of something that will actually hit you right in your backyard or in your neighbourhood park,” he said.