TORONTO -- Prince Harry said he had "no other option" but to step back from royal duties in his first public remarks since Buckingham Palace announced he and his wife, Meghan, would give up their royal titles. Here's what else you need to know to start your day.

1. Huawei hearing: A Vancouver court begins hearing the fractious extradition case of Meng Wanzhou today, the executive from the Chinese telecom giant Huawei who is facing fraud charges in the U.S.

2. N.L. storm: Members of the Canadian Armed Forces are in Newfoundland and Labrador to assist with snow removal and help restore power as residents brace for more precipitation on top of a record snowfall.

3. Royal riff: Thomas Markle has accused his estranged daughter of "cheapening" the Royal Family by stepping down from her role, saying she tossed away every girl's dream of being a princess for the sake of money.

4. Coffee production: Your price of your morning cup of java could go up due to the leaf-eating fungal disease 'coffee rust' that is being spurred on by climate change.

5. Blue Monday: The third Monday in January is widely referred to as the saddest day of the year. While there is little to no science behind Blue Monday, here's why you may in fact be feeling sadder than usual.

Storm humour: N.L. residents spent the weekend digging out from record-breaking snowfall, but many were able to keep their senses of humour shining through the unprecedented blast of winter. 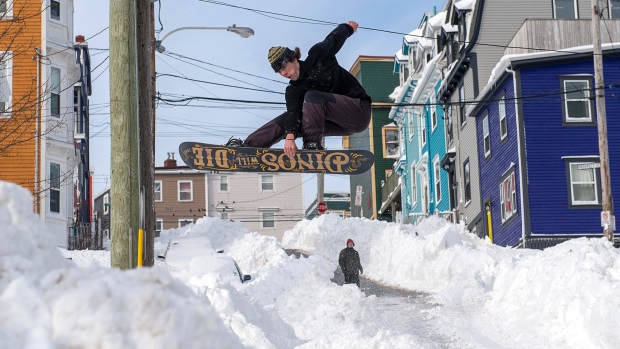