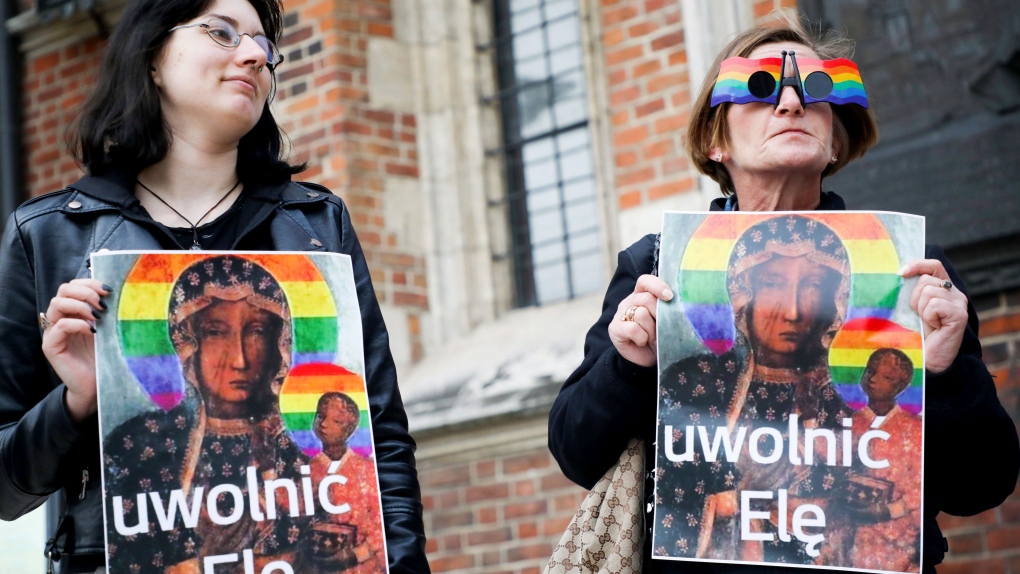 In this photo taken in Krakow, Poland, May 6, 2019, picketers with posters of Poland's most-revered icon of Mother of God of Czestochowa with the LGBT rainbow colors added to its halos, protest the detention for a few hours of Elzbieta Podlesna, on suspicion she put up such posters near a church in the city of Plock. (AP Photo/Beata Zawrzel)

WARSAW, Poland -- Rights groups and government critics in Poland are protesting Tuesday after police temporarily detained a human rights activist for putting up posters depicting the country's most revered Catholic icon with the LGBT rainbow on the halos of Mary and baby Jesus.

Prosecutors in the central city of Plock said the woman has been questioned and has heard charges of insulting religious feelings and desecration of the icon of Mother of God of Czestochowa, popularly known as the Black Madonna of Czestochowa, a painting housed at the Jasna Gora monastery in Czestochowa, in southern Poland, since the 14th-century.

The activist, 51-year-old Elzbieta Podlesna, last month placed posters with altered images of the icon on walls, garbage bins and mobile toilets near St. Dominik's church in Plock. She did not physically damage the icon, which was venerated by pontiffs including Pope John Paul II.

European Council president Donald Tusk, who was in his native Poland, said the Polish authorities' harsh reaction was "inconceivable." The Warsaw-based Helsinki Foundation of Human Rights found the raid on Podlesna's home and her brief detention "hard to understand."

The case has highlighted the clash in predominantly Catholic Poland between the freedom of speech and laws banning hostility against religious beliefs. On social media, debate raged between critics of the government who said it was an abuse of power, and Catholics and backers of the conservative ruling party who argued their feelings were intentionally hurt.

Deputy Justice Minister Patryk Jaki called the posters part of a campaign to "humiliate Catholics" and said it has to be stopped.

The debate came ahead of this month's European Parliament elections.

In recent weeks, the ruling rightwing Law and Justice party has described the LGBT rights movement as a danger to Polish families and children. It seemed to be tapping into a belief held by some Poles that liberal values have been forced on them as a result of Poland joining the EU 15 years ago.

LGBT rights have become increasingly visible as more Polish cities and towns hold gay pride parades, including in places known as bastions of the church and conservative values like Czestochowa.

"How can you attack anyone using a picture, let's be serious," she added.

Podlesna said police came for her early Monday and searched her home. She was put in custody for several hours.

She could face up to two years in prison or a stiff fine if convicted.

Interior Minister Joachim Brudzinski thanked the police for their action and said that the principles of freedom and tolerance did not give anyone the right to hurt the feelings of believers.

Poland is predominantly Catholic and its government is conservative and pro-church, in recognition of the church's supportive role in the country's struggle for freedom during World War II and later against communist rule.

Jasna Gora is the nation's holiest shrine, drawing hundreds of thousands in annual pilgrimages. The late Pope John Paul II, who was Polish-born, visited it since childhood and as a clandestine student during WWII.

The church has recently been under criticism in Poland for its continuing prominent role in state matters, and for revealing hundreds of covered-up cases of sexual abuse of minors by priests.

Public opinion surveys have shown falling support for having nuns and priests, or even lay educators, teach religion in public schools.